A newly opened vent connected to the ongoing Puu Oo cone eruption on the eastern flank of Hawaii Island’s Kilauea volcano is sending a slow-moving lava flow through dense forest and in the direction of homes in the Puna district subdivision of Kaohe.

As of the afternoon of Sept. 11, the 10.5-mile long flow remained in the Wao Kele o Puna Forest Reserve, but was within 0.3 miles of the Kaohe subdivision, according to Hawaii County Civil Defense alerts. Situated 20 miles southeast of Hilo near the town of Pahoa, the subdivision is a rural residential neighborhood. The Puu Oo vent producing the lava flow opened on June 27 and has been erupting continuously since.

As of Friday morning, no evacuations of the subdivision had been ordered by Hawaii County Civil Defense officials.

According to the Hawaiian Volcano Observatory, the lava flow had been advancing at approximately a quarter mile per day through the forest reserve parallel to the subdivisionʻs northwest boundary, but slowed to about 0.19 miles per day between Sept. 10 and 11. On Wednesday, the observatory announced that at its current rate, lava could reach the northwest edge of area homesteads in 1.5 days, though that has yet to transpire.

An update from Hawaiian Volcano Observatory on Friday morning reported that, should the flow continue, it would likely cross Pahoa Village Road—the main artery through Pahoa town—on or around September 24 to 26. 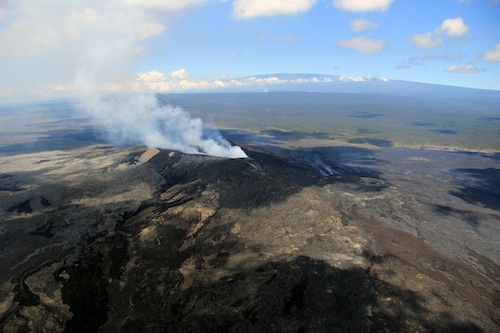 The movement of lava flows is challenging to anticipate, so scientists and residents are closely monitoring the flow’s path. What seems to be most frustrating to area residents is that the only course of action thus far is watching and waiting to see where the lava goes. That’s because, any action—or even inaction—regarding the flow is, well, complicated.

The current flow is part of a continuous eruption from Kilauea that has been ongoing since 1983. According to USGS statistics, lava from the three-decade-plus eruption has already destroyed 189 structures and claimed eight miles of highway.

Hawaii Island’s history with errant lava flows is marked by several unsuccessful attempts to divert them. After an 1881 eruption from the island’s massive Mauna Loa volcano threatened Hilo, walls were erected to divert magma. When that didn’t work, scientists suggested future efforts should incorporate explosives to throw the lava off its course and limit flow from main arteries. In 1935 and 1942, the U.S. Air Force tested this theory and bombed creeping pahoehoe (smooth, ropy) lava channels on the north flank of Mauna Loa. The 1935 bombings did little to stop the flow. Following unsuccessful diversion efforts in 1942, the Mauna Loa flow stopped of its own accord when a vent collapsed naturally. In 1989, the National Park Service tried dumping water on lava approaching a visitor center at Hawaii Volcanoes National Park with little effect; the center was eventually overrun.

While scientific understanding of volcanism has advanced (and aerial bombing technology has modernized) few opportunities have allowed scientists to re-test their theories. Diversion efforts are challenging to replicate, with new, uncontrollable variables like topography, terrain, and the volume and speed of the flow presenting with each eruption.

The lava flow cuts a path through Wao Kele o Puna Forest Reserve as it advances in this photo from Sept. 6. (Click photo to enlarge.) Photo: USGS/Hawaiian Volcano Observatory.

What’s more, in the case of the current lava flow, any attempt at diversion could do more harm than potential good. USGS officials said as much when they highlighted the futility of potential diversion efforts at a community meeting on September 3rd. There, USGS representatives cited not only the limited effectiveness and potential detriment of possible diversion efforts—diverting, they said, could simply send the lava flow barreling toward a different subdivision—but also the risk of upsetting Hawaiian cultural practitioners and many Hawaii residents. Hawaiian cultural beliefs strongly discourage altering the course of nature, particularly with regard to volcanic events.

HawaiiMagazine.com will continue to monitor news from Hawaiian Volcano Observatory on the lava flow. We will update this story as necessary.