Not far from the busy streets of Lahaina, cultural practitioners, botanists and others are preserving traditional Hawaiian farming practices and values.

Nestled on Mauna Kahālāwai on Maui is a hidden oasis.

Native Hawaiian plants like the a‘ali‘i, a shrub with small green leaves and burgundy flowers, grow in a forest among naio, a false sandalwood, and alehe‘e, a tree with delicate and fragrant white flowers. Nearby, kalo (taro) sprout from a lo‘i (an irrigated terrace, especially for taro) alongside tubers of ‘uala (sweet potato). This is Kipuka Olowalu, a reserve committed to reviving the native ecosystems and biodiversity of Maui’s Olowalu Valley, which stretches from the mountains to the 1,000-acre reef below.

Many cars pass Kipuka Olowalu on the drive to Lahaina—it’s above the famed Leoda’s Kitchen and Pie Shop—but it’s likely very few of the people in them are aware of the area.

Like many natural sites and landmarks in Hawai‘i, Olowalu Valley has a fascinating history—and one that is still being unraveled. Olowalu is known for its reef and petroglyphs, but resources suggest it was once an area of refuge for those seeking sanctuary.

Often, visitors and residents alike travel through the Islands without knowing the significance of a particular ahupua‘a (land division). But when they volunteer to mālama ‘āina (respect and care for the land), they work alongside cultural experts and conservationists who share their knowledge about the history and unique biodiversity of these Islands. 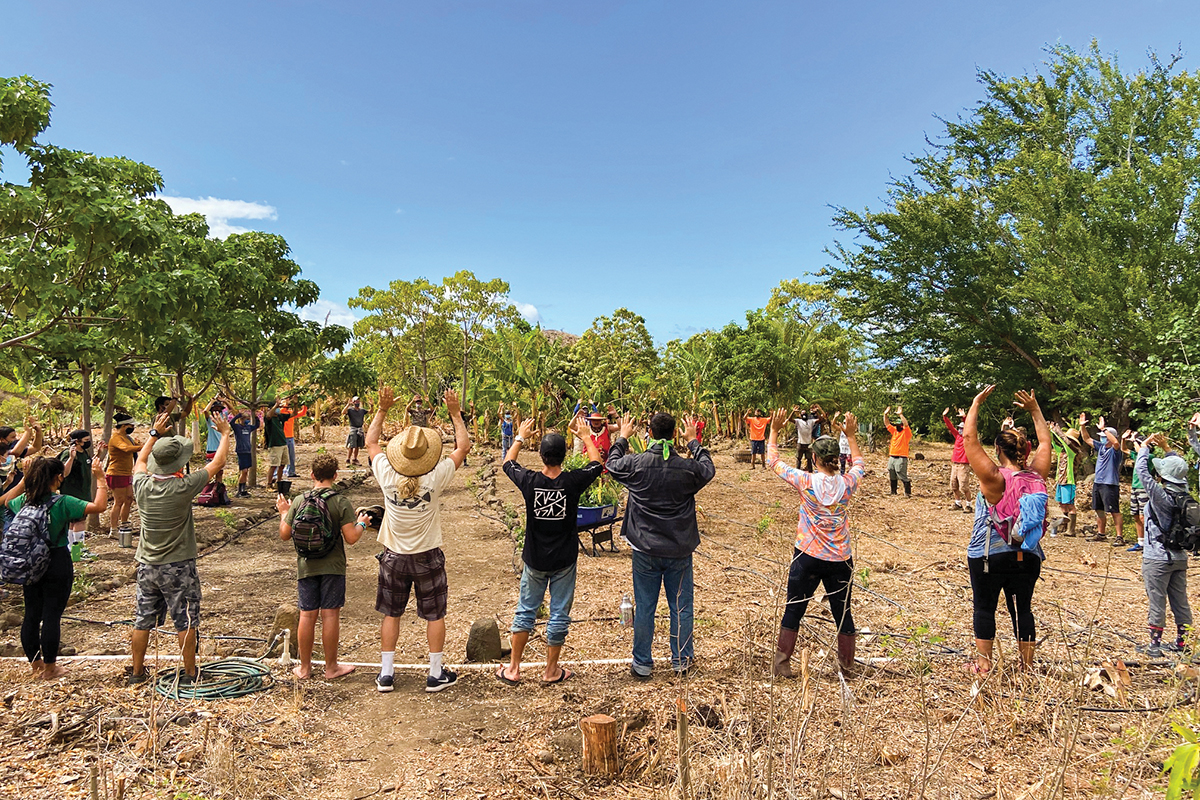 At Kipuka Olowalu, a team of cultural practitioners, botanists, artists and field technicians welcome volunteers to get their hands in the soil and learn about the area at the base of Mauna Kahālāwai, also known as the West Maui Mountains.

“Everyone comes away learn-ing at least one thing. That is one of our goals we set out at
the start of the day,” says Karin Osuga, the executive director of Kipuka Olowalu.

But there’s certainly more than one thing to take away after a morning at the reserve.

The day begins when Ua Aloha Maji, the team’s cultural practitioner, blows his conch and leads an oli (chant). The group members show their respect to the site before beginning the day’s work, which can range from clearing invasive species to working in the lo‘i. Although tasks vary every day, volunteers learn about traditional Hawaiian farming techniques and gain a deeper understanding of the water cycle and a stronger appreciation for the land. 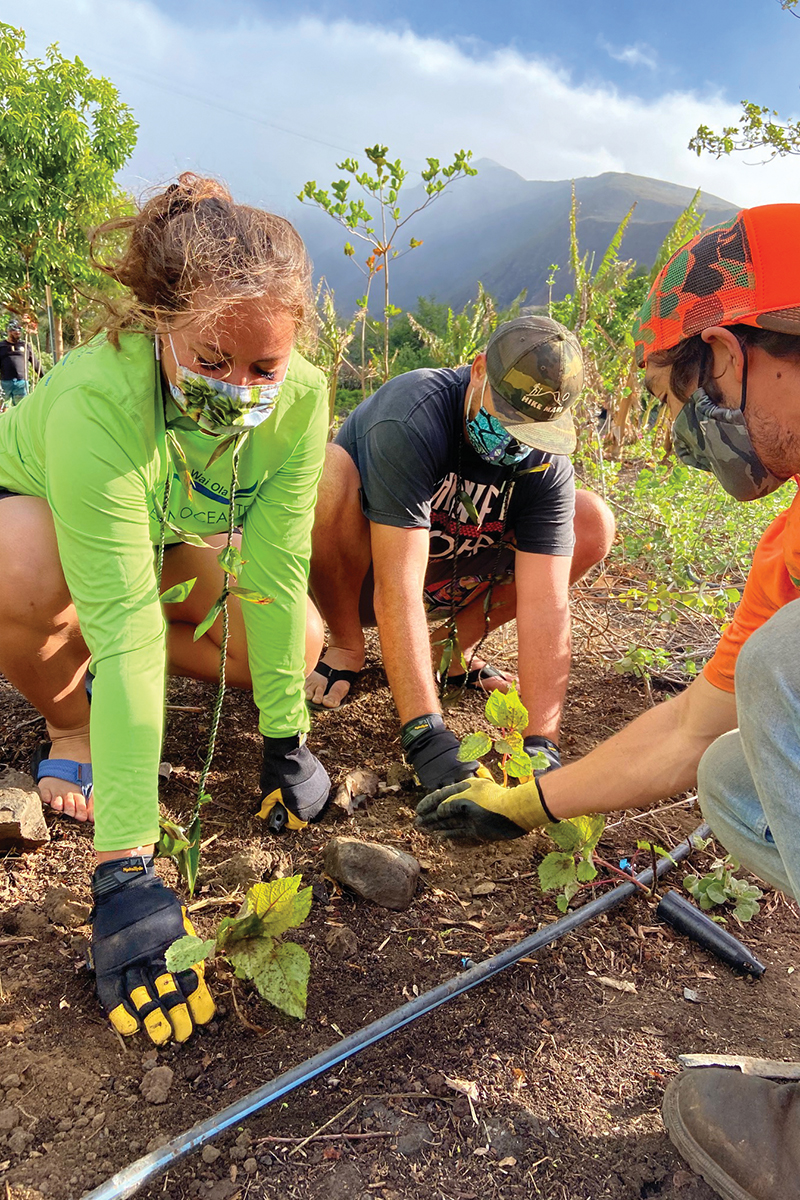 Native trees and crops thought to have grown in the valley are being planted again.
Photo: Courtesy of Kipuka Olowalu

After spending about 90 minutes working—just enough time to build up a sweat without being overworked, Osuga jokes—the day ends with a talk story tour through the property. Visitors explore the team’s on-site projects, including a native forest zone and the vermiculture station, where worms are busy at work breaking down biological matter for compost. There are also patches of ‘uala, an important crop in early Hawaiian diets. “We believe Olowalu Valley was known for sweet potato. That was the predominant crop in the area,” Osuga says. “When we think about planting, we’re trying to be conscientious of what was here originally.”

Along with sweet potato, the team is bringing back a variety of native trees and crops that were grown in the valley hundreds of years ago. And they are planting these species using traditional Native Hawaiian farming practices. Throughout the tour, botanists and conservationists discuss a range of environmental topics, many of them focused on preserving traditional Hawaiian agriculture. Early Hawaiian farmers had no fertilizers or pesticides and none are used today in the valley. Forgoing the use of toxic chemicals not only mimics early Hawaiian farming techniques, it’s also essential to protecting the reef below.

“Olowalu reef is the largest reef system in Maui County and a mother reef—it seeds the other reefs around it. It is this big mama reef that is important to the health of all the reefs throughout the county,” explains Osuga. When chemicals from fertilizers and pesticides runoff into the ocean, they not only hurt the coral reef, but also the marine species that depend on it. 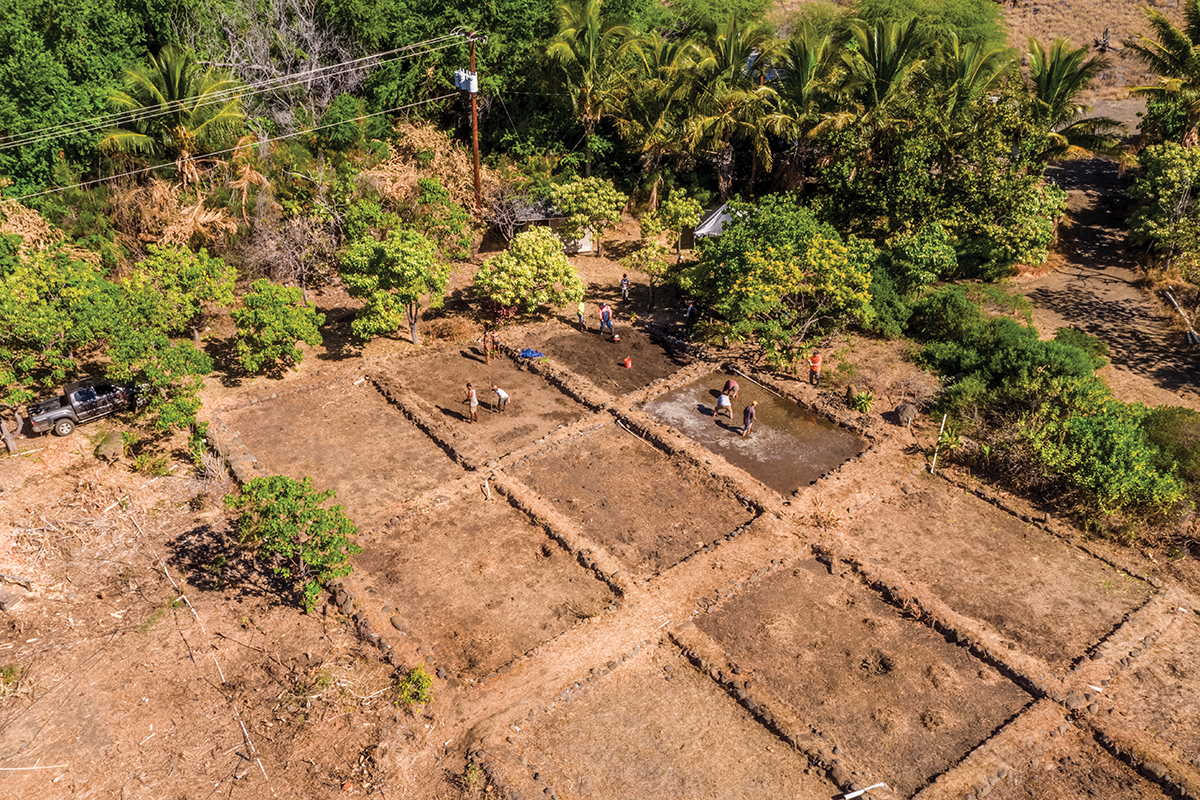 “We all learn about the water cycle: It rains on the mountain; the water runs down the streams and out to the ocean. We all have this general understanding, but we forget how much of an impact that we can have through our daily activities and the way we manage our land,” Osuga says. “Everything is connected, and we’re connected to the natural world as humans.”

And Olowalu is a tiny town connecting West Maui with the rest of the Valley Isle. Cars either pass right through or they make a stop at Leoda’s. But if they take a detour up to the valley, visitors can explore the cultural site and see firsthand the relationship between humans and the land. And they can help.

Kipuka Olowalu hosts weekly volunteer days on Wednesdays and Thursdays. For more information and to sign up, visit kipukaolowalu.com.