Hawaii has known for a year that the National Football League’s Pro Bowl would be returning to Oahu’s Aloha Stadium in 2011. Now we have a date: Jan. 30 … a week before the Super Bowl, once again.

The NFL and Hawaii Tourism Authority announced the 2011 Pro Bowl date on Tuesday, finally quieting speculation about whether or not the annual all-star game would be played before the Super Bowl for a second consecutive year. Prior to this year, the Pro Bowl was traditionally played in Hawaii a week after the Super Bowl.

In December 2008, the NFL announced that it would be moving the 2010 Pro Bowl to Miami, Florida after 30 years of hosting the game in Honolulu at Aloha Stadium (pictured, below). In hopes of boosting stadium attendance and the TV audience for the all-star game, the NFL also opted to experiment with scheduling the 2010 Pro Bowl a week prior to the Super Bowl.

The change of date worked, for the most part. Broadcast on ESPN on Jan. 31 during prime time instead of its traditional afternoon time slot, the 2010 Pro Bowl attracted the largest television audience the game had seen since 2000—12.3 million viewers vs. 2009’s 8.8 million viewers. A sellout audience of 70,600 fans filled Miami’s Sun Life Stadium, giving this year’s game its largest attendance ever.

(To be fair, Aloha Stadium’s maximum capacity for football games is only 50,000, and the Hawaii Pro Bowl was always a sellout.) 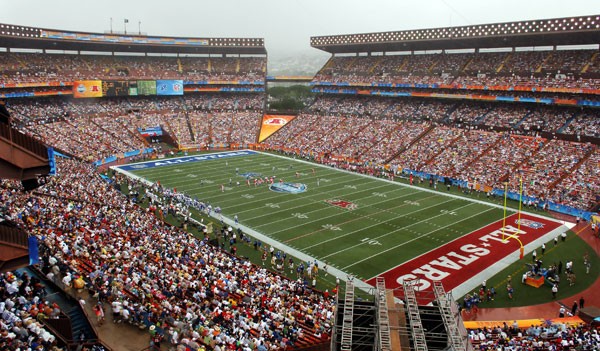 The biggest problem with the Pro Bowl’s new Miami date, though? No pros. No pros from this year’s Super Bowl anyway, most of whom skipped the all-star game to avoid injury and to prep for the big game.

The change in location from Hawaii to Florida was also less than successful. Players balked at not having their traditional week of sun, sand and relaxation in Hawaii after a long season on the Mainland. National sports journalists missed the plum post-season work assignment in Hawaii. And thousands of pro football fans here in the Islands lost their only annual opportunity to see the NFL’s best play on Hawaii FieldTurf.

Hawai’s state coffers also took a hit. The 2009 Pro Bowl generated $28.6 million in visitor spending, $2.9 million in state taxes and brought in 18,800 visitors specifically for the game. Saying Hawaii state government officials are happy about the Pro Bowl’s 2011 and 2012 return is an understatement.

The Hawaii Tourism Authority will pay $4 million per game to keep the Pro Bowl in Hawaii in 2011 and 2012.

“We know how much the Pro Bowl means to our residents, the players and to the thousands of fans from the Mainland who enjoy visiting our state for the game,” said Hawaii Tourism Authority CEO and president Mike McCartney, in a statement. “The Pro Bowl is a great investment for our state with both economic and community benefits.”

Still up in the air is the 2013 Pro Bowl’s host city, which the NFL has not yet disclosed.