This is a hidden gem for cyclists and walkers.

Never mind asking where it starts and ends, ask even longtime Oahu residents about the existence of the Pearl Harbor Bike Path and you might get some quizzical looks. And that’s OK.

Most don’t realize there’s a great bike path that runs from the Aiea Bay State Recreation Area, just a few hundred yards north of the USS Arizona Memorial Visitor Center parking lot, to the town of Waipahu, much of it along Pearl Harbor shoreline.

But it’s there, and definitely an Oahu hidden gem for biking, jogging or walking enthusiasts.

I had first heard about the Pearl Harbor Bike Path as a reporter covering the area for a major Oahu daily newspaper. In 2001, community groups and the City & County of Honolulu drew up a master plan for a multi-use Pearl Harbor Historic Trail shoreline path that would run 18.6 miles from Halawa Landing, near the USS Arizona Memorial Visitor Center, to the town of Nanakuli on Oahu’s leeward coast.

The goal was to reinvigorate communities along the route, upgrade the existing shoreline path, enhance and preserve the area environment, and create economic opportunities for area businesses. It was even hoped that the revitalization would lead to the reopening of the Oahu Railway & Land Co.’s right-of-way, offering visitors train rides along the Ewa and Leeward Oahu coastline, stopping at various shops and eateries that would spring up along the route. 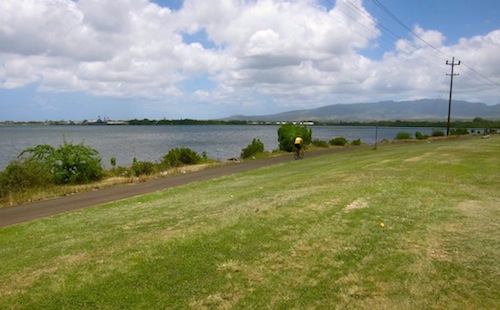 It was a great goal. But it was also expensive and never a high-priority project for the City and County of Honolulu. All that became of the plan was, basically, an improvement of the existing 10-mile paved shoreline bike path from Halawa Landing to Waipahu, which now comprises the Pearl Harbor Bike Path

Recently, I decided to finally check out the path for myself on bikes. We decided to start our ride at Neal S. Blaisdell Park, a couple of miles west of Aiea Bay State Recreation Area. The shoreline park, with a lovely view of Pearl Harbor, has ample parking and restrooms and seemed the best place to start pedaling toward Waipahu.

I was quickly surprised by how many people used the path—from athletes in cycling jerseys and families out on walks to kids on tricycles and joggers. It was nice to see.

Less enticing for some riders? The Pearl Harbor Bike Path is not the most classically scenic bike trail you’ll find in the Islands. There are no valley, beach or mountain views or crossings here. In fact, the trail passes more than a few industrial areas and, for a brief stretch, is shadowed by a major viaduct of the H-1 Freeway as it moves along the Pearl Harbor shoreline toward Waipahu. Still, I found it a fun biking path, crossing a few old wooden bridges, passing venerable shoreline neighborhoods, a small farm or two, and offering up little-seen views of the Pearl Harbor area. 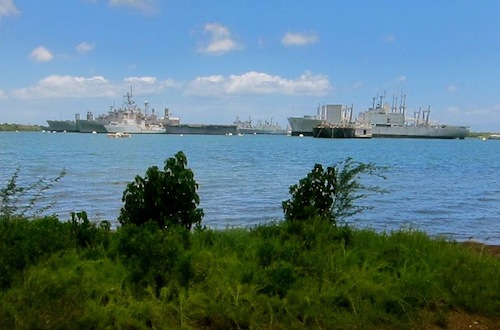 As we began our ride west toward Waipahu, one of the first major landmarks alongside the path was Hawaiian Electric Co’s massive Waiau Power Plant. A mega-industrial sight, indeed. Soon, however, we found ourselves pedaling past a small farm, with taro and watercress patches—a pleasant reminder of the family farms that were once numerous along the Pearl Harbor shoreline, but are now largely gone.

The Pearl Harbor shoreline the bike path passes through is largely arid. But patient bikers and hikers will find the occasional patch of green here, too, including one large stretch where we pedaled beneath the shade of kiawe trees. Another cool sight along the trail was a shoreline view of the massive, mothballed battleships of Pearl Harbor’s Middle Loch, the solemn, decommissioned vessels stripped of their gun turrets and other battle-ready identifying parts.

As the path took a turn inland just beyond West Loch, a small stream resembling a protective moat began to separate neighboring homes from the bike route. A few homeowners had decided to take advantage of their mini-waterfront locations by building small backyard docks over the stream, complete with dock chairs and small boats tied to them, even bridges connected to the bike path. Other homes featured tiny vegetable and flower gardens. 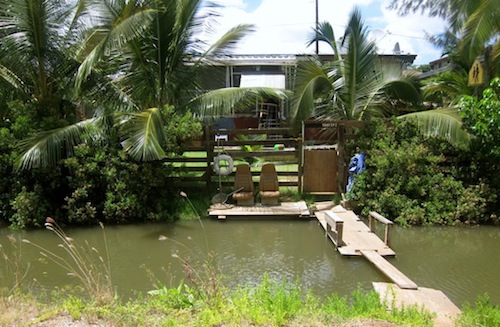 The Pearl Harbor Bike Path ended abruptly, and with very little ceremony, across from the Honolulu Fire Dept.’s maintenance shop in Waipahu. It wasn’t a location big on cool scenery, but we did get to check out some old fire trucks parked in its lot before heading back east.

On the way back to Blaisdell Park and our car, we passed residents walking their dogs, folks fishing along the shoreline and fellow bikers. All in all, the path provided us a great afternoon of biking through an area we’d never see before, and didn’t know existed. Not always pretty, but definitely interesting. And that alone made the experience a memorable one.