The third annual “Washed Up” art show will be on display through July 2.

Most people might throw away the bottle caps, fish nets, buoys, plastic fragments and other marine debris that washes ashore, but 26 Kaua‘i artists turned what most of us would consider trash into 66 thought-provoking works of art.

Those pieces are now on display at the Kaua‘i Society of Artists’ “Washed Up” exhibit at the Kukui Grove Center in Līhu‘e. The third annual show, which is being held in conjunction with World Oceans Day on June 8, is co-sponsored by the Surfrider Foundation of Kaua‘i and meant to increase awareness of single-use plastic and marine debris. The exhibit runs through July 2. 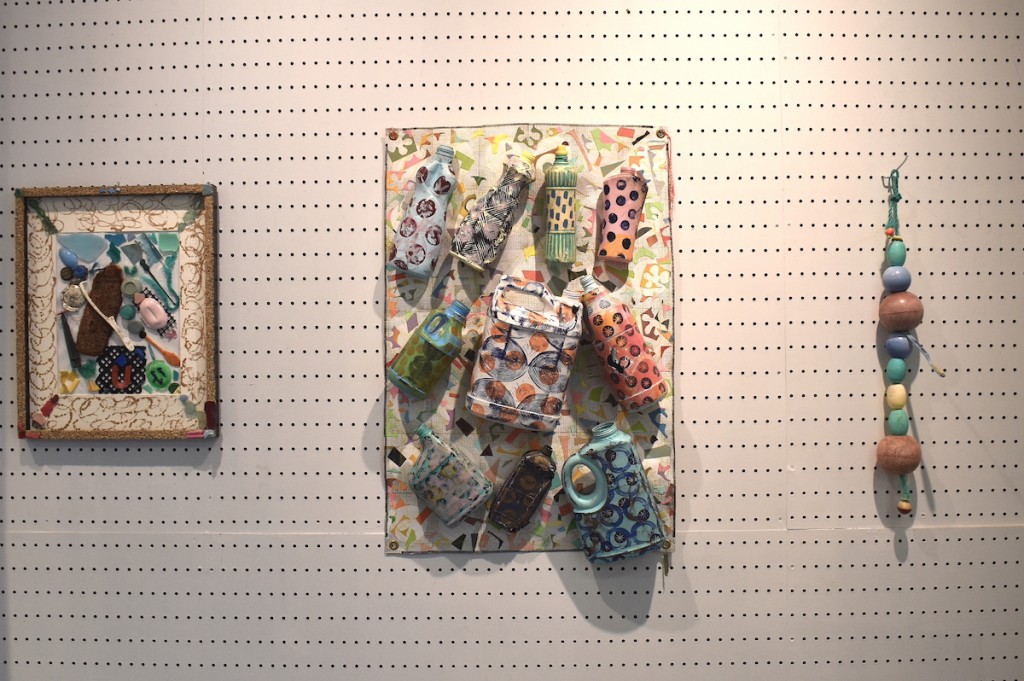 Artists’ work had to be made from at least 50% man-made debris. In these pieces, you’ll see artists used jugs, rope and other plastic fragments.
Photo: Noelle Fujii-Oride

Each artwork is made with at least 50% man-made marine debris. Artists have turned ghost nets into a wreath, a set of plastic buoys into a totem, glass and plastic into a mosaic mermaid, marine and shoreline findings into a collection of jewelry, and more.

“It’s all about the creativity of these artists that can take this waste product, make a statement with it and, hopefully, as people walk in here and as children walk in here, they become more aware,” says Rose Anne Jones, KSA treasurer and exhibit co-chair. Preaching the message “do not use plastics” doesn’t always work so well, she adds, but making fun and interesting art can help shift people’s thinking. 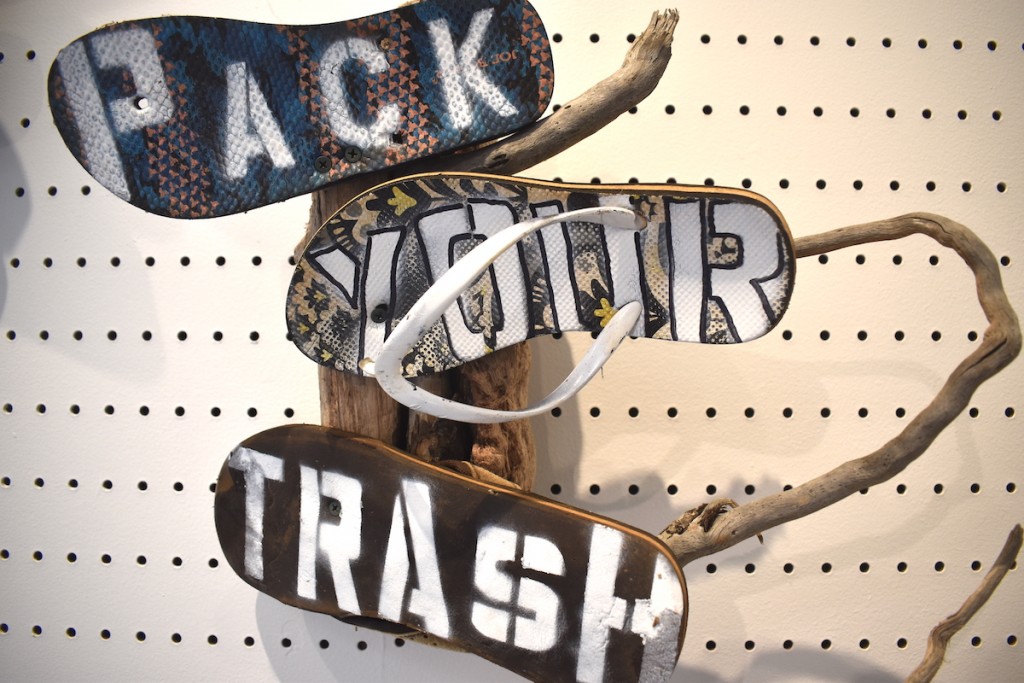 Abigail Boroughs, an artist, KSA board member and exhibit co-chair, started this show. In 2018, she held her own weeklong marine debris art exhibit at KSA’s gallery with nine other friends who were also turning trash into art. Art shows focused on marine debris have been popular around the world, she says, but she didn’t know of anyone in Hawai‘i doing them.

Surfrider Kaua‘i and KSA partnered to put on the show the next year. Barbara Wiedner, vice chair of the Kaua‘i chapter, says it was a good fit because the chapter had been wanting to do an art show for several years. She sees it as another way to educate people about marine debris and the foundation.

“It’s educating through art, where for a month people and visitors, Kaua‘i residents and visitors, are able to come in, look at the beautiful marine debris art that’s made and learn about Surfrider, learn about protecting ocean waves and beaches so that we’re reaching a group that we may not reach,” she says, adding that Surfrider volunteers will be staffing a table at the exhibit.

Surfrider volunteers collect an average 10,000 pounds of debris and nets each month on Kaua‘i. About half of the collected items is derelict fishing net, says Wiedner, who is also the co-coordinator for the chapter’s beach cleanup and net patrol programs. 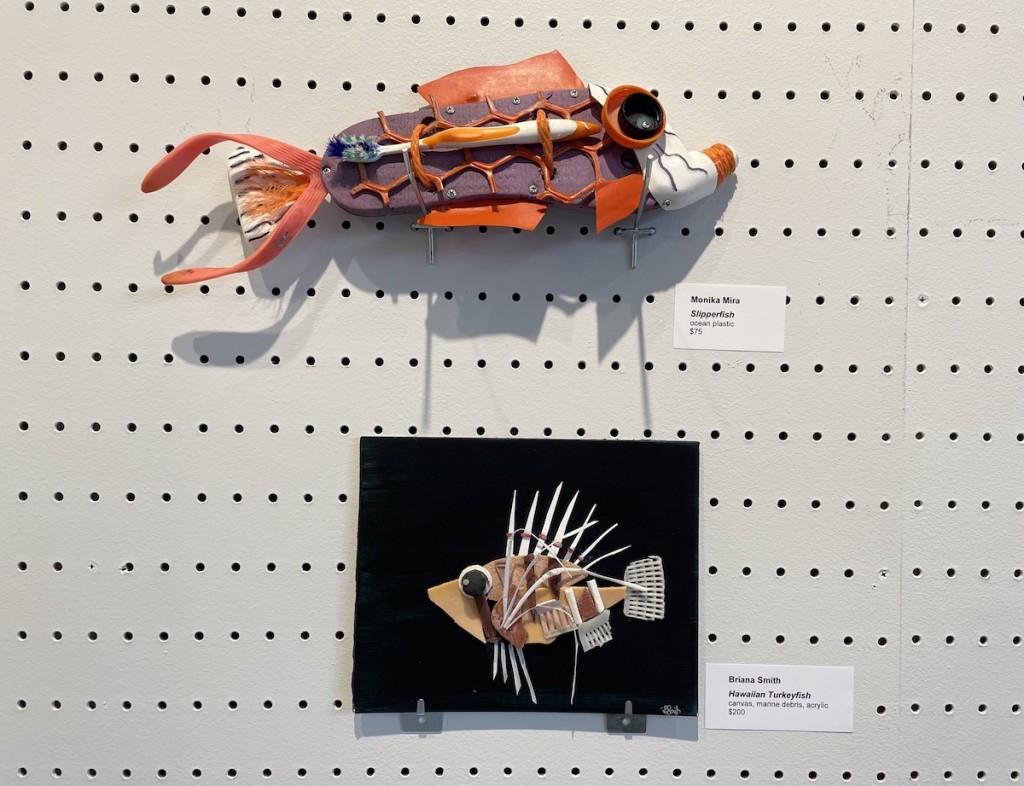 According to Conservation International, a nonprofit environmental organization, 8 million metric tons of plastic enter the oceans each year. That trash can break up into smaller pieces, which marine life can eat, and when microplastics eventually degrade, they’ll further contaminate the sea. Conservationists have said that the increased use of personal protective equipment and single-use plastics during the pandemic has likely made ocean plastic pollution worse.

(Honolulu County banned single-use plastic starting January 2021. Food vendors are now allowed to provide plasticware, including utensils, straws, foam plates, cups and food containers. In January 2022, additional plastic food ware will be included and all other businesses will also have to adhere to the policy.) 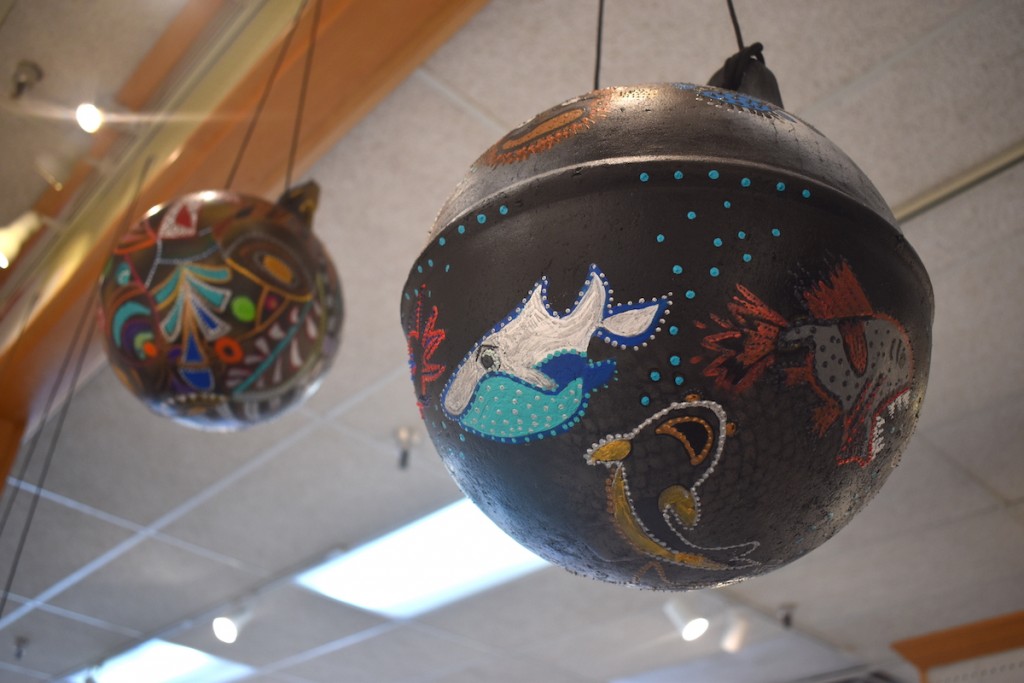 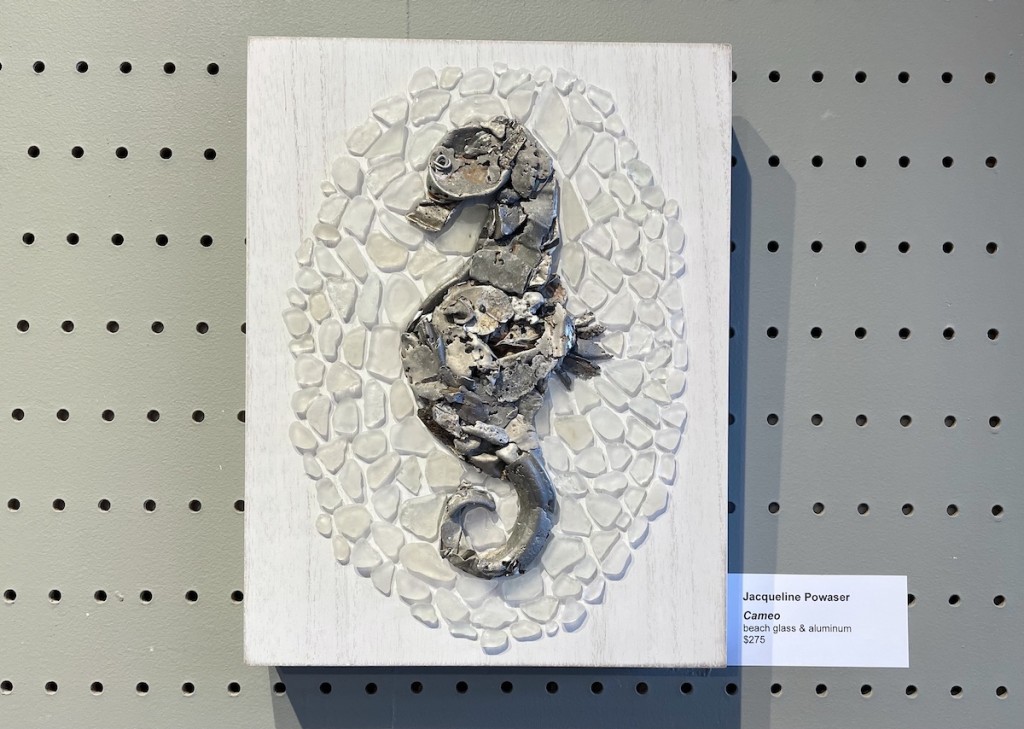 Boroughs has several pieces in this year’s show, but her favorite is the abacus she worked on with her friend, Andrew Gorton, who gave her pieces of reclaimed wood. The rainbow-colored bottle caps came Midway Atoll by way of Boroughs’ friend, Hob Osterlund. Boroughs says it was Gorton’s idea to make the abacus so that people could count beach trash.

She says she hopes the exhibit will encourage people to consider their use of single-use plastics and get involved in beach cleanups: “We can all work together to help solve the problem as much as we can,” she says. “It’s not going to change overnight, but small steps along the way make big impacts.” 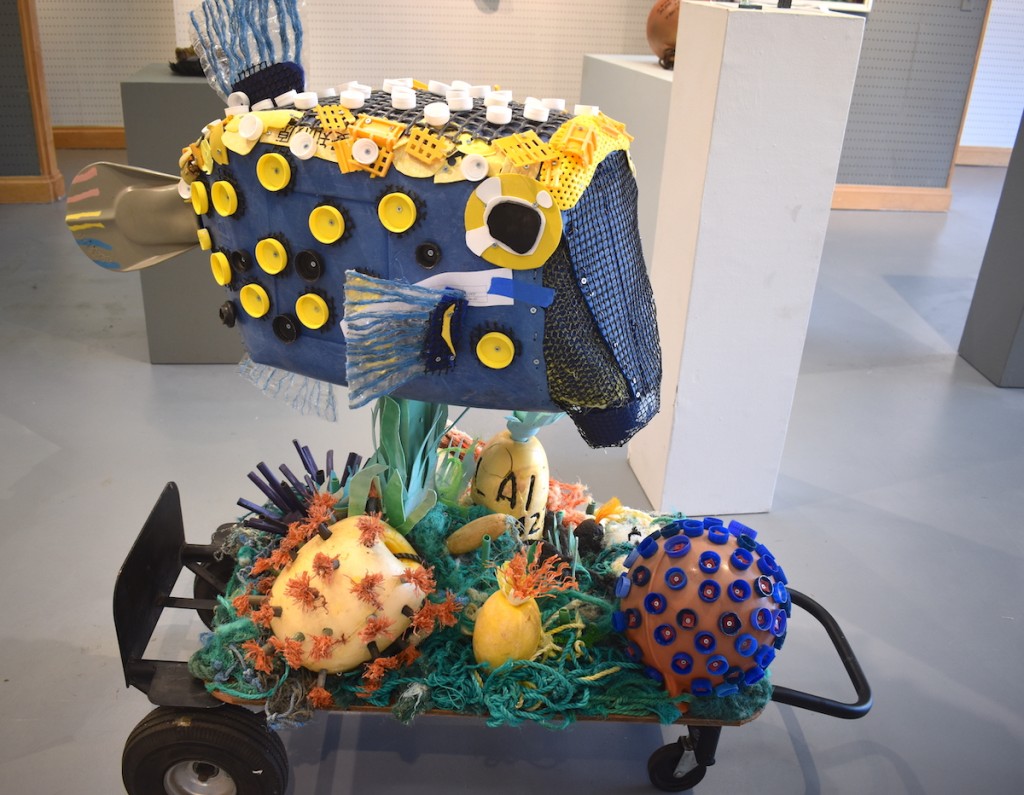 The inspiration for Monika Mira’s sculpture, “Ostraceon dieseljugeous,” came from a diesel jug, which immediately made her think of a spotted box fish.
Photo: Noelle Fujii-Oride

One of the exhibit’s largest pieces is housed by the center of the gallery. Made of ropes, bottle caps, containers, buoys, fish nets and other plastic waste is what Surfrider Kaua‘i’s artist in residence Monika Mira calls “ostraceon dieseljugeous.” The fish made from a diesel jug, which she says inspired her to create a spotted boxfish.

“It’s amazing that people can take trash and make something really amazing and unique,” she says, adding that creating artwork like this is not just about the final piece. Rather, it’s about the conversations that occur after seeing it.

“It needs to be a constant reminder because we all have a choice.”

Your Guide to Kīlauea, Kauaʻi