See the New Residents at the Honolulu Zoo on Oʻahu

There are a few new residents at the Honolulu Zoo—and more days during the week you can view them.

Starting Monday the 42-acre zoo will be open seven days a week, from 10 a.m. to 3 p.m. And that means more time to spend with three new meerkats the zoo acquired—and a new baby sloth, too.

Brothers Raphael, Leo and Mikey, 4-year-old meerkats from the Toledo Zoo, have been placed on exhibit at the Honolulu Zoo for the public to visit. 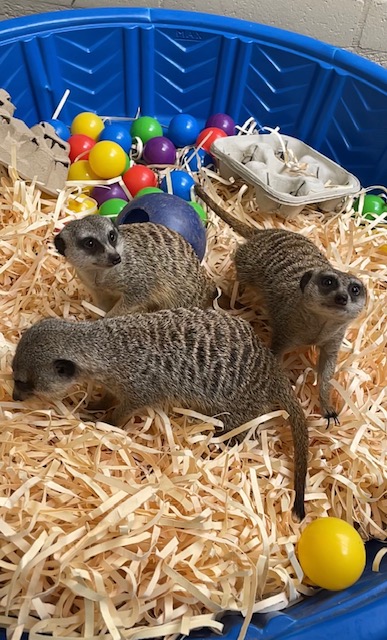 Photo: Courtesy of the Honolulu Zoo

Some fun facts about meerkats:

“We are very happy to have meerkats back on exhibit in the Honolulu Zoo,” said Honolulu Zoo Director Linda Santos. “These popular animals help us to educate the public and we’re thankful for the continued partnership with the AZA [Association of Zoos and Aquariums] and zoo facilities across the country which support us in our conservation education efforts.”

And there’s a very recent addition to the zoo’s sloth family.

Read More: A New Baby Sloth is Born at the Honolulu Zoo

And you can watch Harriet, a Linneaus’s two-toed sloth (also known as a southern two-toed sloth) with newborn via a live webcam at the zoo. (Click here.) Her second and third offspring, Akala and Tommi, now live at two other zoos. (Akala resides at Panaewa Rainforest Zoo and Gardens in Hilo.) Her firstborn and more recent baby, Lolohi, share an exhibit at the Honolulu Zoo with the two golden lion tamarins, near the front of the zoo.

Read More: This Little Zoo is a Hidden Gem on Hawaiʻi Island

Sloths give birth to one offspring at a time but do not readily breed in zoos. Two-toed sloths are nocturnal and sleep 16 to 18 hours per day, with a diet consisting of leaves and fruit. Offspring will stay with their mom for 9 to 12 months. The lifespan of sloths in the wild is 15 to 20 years, and can be considerably longer in captivity.

10 Family-Friendly Activities to Do in Hawaiʻi