Snaking across the upper rim of Kauai’s Nualolo Valley, a footpath thrusts its travelers onto a sheer edge.

That’s where I find myself this sunny December morning, teetering on the ridge after a two-hour traipse through damp woods where spongy mushrooms and delicate wildflowers grow.

Pitted against an unblemished blue sky that melts seamlessly into the hue of the sea, I’m drawn to the striking contrast of colors a thousand feet below. Just beyond the toes of my muddied hiking shoes, a sheer cliff plummets into a red and green gorge abutting a shell-strewn beach. Inside this windswept bowl of volcanic dirt and thick vegetation, rare native plants and archaeological wonders survive.

This aerial view, a panorama so dazzling that it almost appears to be fake, is the reward for hikers who surmount the Nualolo Trail in Kokee State Park. The cap on a difficult half-day trek, it’s a vista best enjoyed by those immune to the fear of heights.

Standing in the flight path of the white-tailed tropicbird, I peer into the unvarnished jungle valley at my feet and bask in my great fortune. Consider the geological feats that must have occurred for me to be here. Volcanic eruption. Steady rainfall. Thousands of years of erosion by wind and sea. One of the crown jewels in the 14-mile seacoast named Napali, Nualolo Valley was birthed by a perfect storm of natural phenomena. The result is a landscape so rich and commanding that it takes my breath away.

Before the first Westerners set foot on the Hawaiian Islands, thousands of indigenous Hawaiians occupied the landmark valleys that divide up the Napali Coast. Today this undeveloped Napali coastline, meaning “the cliffs” in Hawaiian, is an unpeopled preserve of native plants and wildlife. But the remains of a lost civilization endure. In Nualolo Valley, ancient rock walls and a reconstructed canoe house stand as reminders of a simpler life.

In Kokee State Park, two trails lead hikers to the spectacular vantage point from which the wonders of Nualolo Valley can be seen. Located off State Road 550 just beyond the mile 15 marker, the Nualolo Trail winds for 3.8 miles beneath a forest canopy, ending at the spectacularly scenic valley rim. Hikers can traverse the Nualolo Trail twice, which makes for a tidy 7.6-mile journey, or take a lap on the newly restored Nualolo Cliff Trail instead. 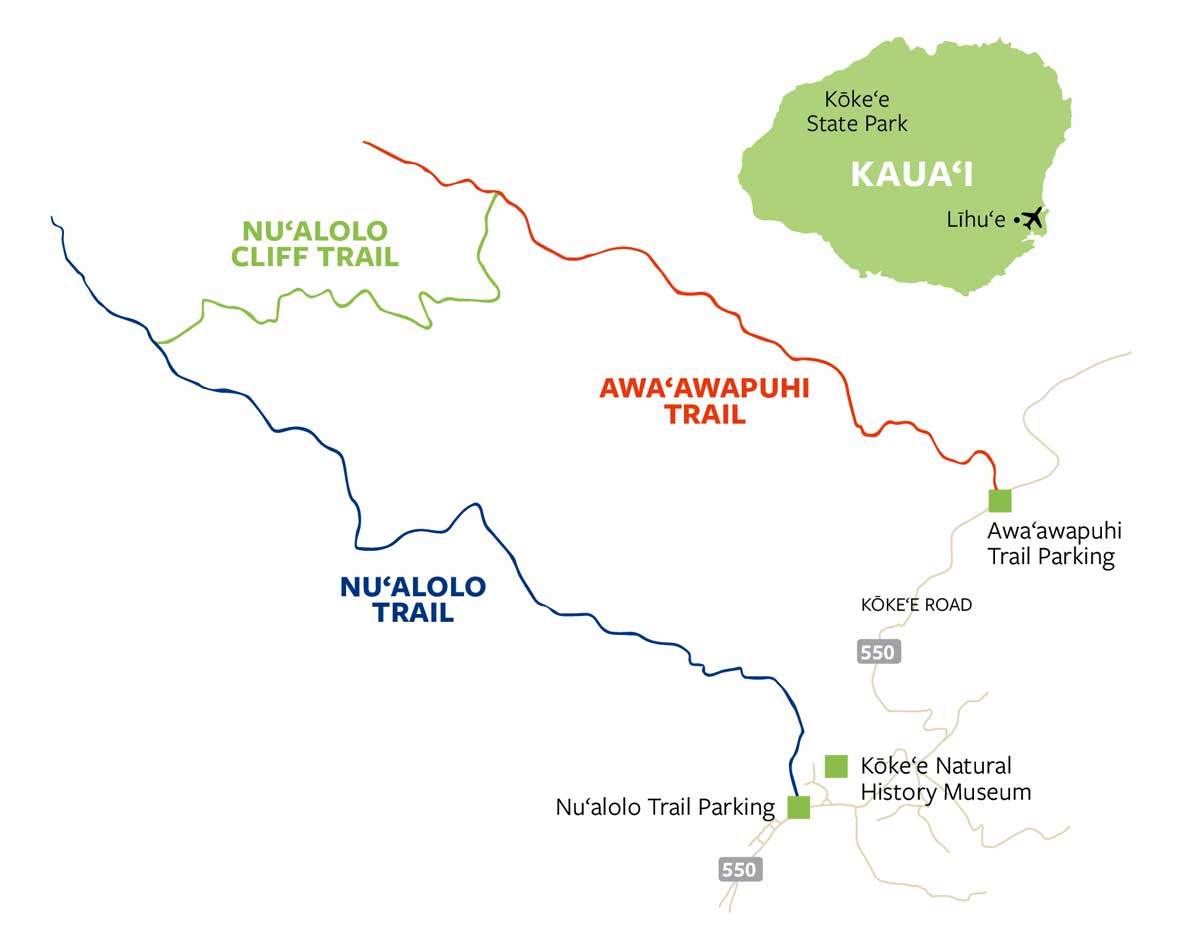 A 2.1-mile footpath connecting the Nualolo and Awaawapuhi trails, the Nualolo Cliff Trail lets hikers forgo any tedious retracing of steps. But it also makes for a longer journey. If you decide to take all the connecting trails, you’re looking at a 9-mile trek.

Newly reopened after more than three years of maintenance to correct trail degradation caused by erosion, the Nualolo Cliff Trail funnels into the Awaawapuhi Trail. Upon reaching this merger, hikers can walk the wooded Awaawapuhi footpath toward the trailhead, off State Road 550 near the mile 17 marker. A brief walk along the highway completes the loop, returning hikers to the small parking lot fronting the start of the Nualolo Trail. This itinerary can also be reversed, with hikers commencing the trek at the Awaawapuhi trailhead, cutting across the Nualolo Cliff Trail and then ending at the Nualolo Trail start.

Boxed in by steep volcanic walls, Nualolo Valley isn’t easily accessible. No hiking trail leads into its concave pit and only a limited number of day boats are permitted to make landfall there. But from the vantage point of the hiking trail skirting the valleys upper rim, the valleys marvels can be explored visually: The hiker becomes an astronaut looking down upon a pristine planet.

Standing alone on the cliffside, I shut my eyes and lose myself in a moment of birdsong and rippling wind. A calm serenity oozes through my veins. My ordinarily busy mind gradually sputters to a halt. I’m consumed by the warmth of the sunlight as it hardens the mud that earlier slapped against my skin, jolted from the wet earth by my thundering boot step.

When I open my eyes, the valley wears new splotches of shadow. A cover of mist and clouds is rolling in, concealing the landscape that had entranced me moments ago. Another few minutes and it’s gone.

With nothing to see but an opaque sky as white as snow, I reverse course and retreat into the woods. Through mud-slicked grasses and spurts of rain, I’ve got 4 more miles to go.

Nualolo Trail
If you go, be advised there is no cellphone service in the area. Be sure to wear sturdy footwear and bring plenty of water and snacks. dlnr.hawaii.gov/dsp/parks/kauai.