Explore some of our favorite selections from this year's photo contest.

It wasn’t easy crowning winners in our 18th annual HAWAIʻI Magazine Photo Contest this year. So many beautiful photographs were submitted by travelers from around the world in four categories—Outdoors, People, Culture, Abstract—and we did our best to narrow them down.

Here, we feature some of the images that were top contenders in the final rounds of judging and illustrate the various reasons the Islands are so picturesque. In our January/February 2017 issue you can see the first and second place winners (not shown here) published in its pages, including the Grand Prize Winner. 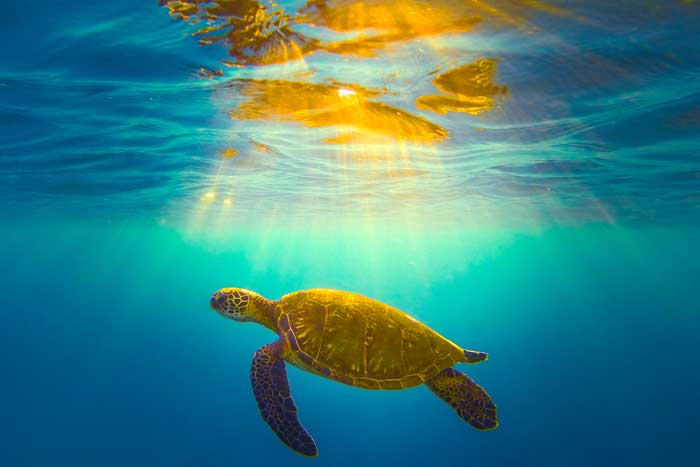 Honu in the light

Photo and caption by Jonavan Crail

As I watched the light dance beneath the ocean surface I thought to myself that it would be perfect lighting if a honu were to show up and model a bit. And just like that, as if she awoke from her slumber from right under the reef beneath me she started to ascend. This will be probably one of the most memorable moments in the ocean for me as not even 10 seconds after I imagined this shot happening, it actually happened. 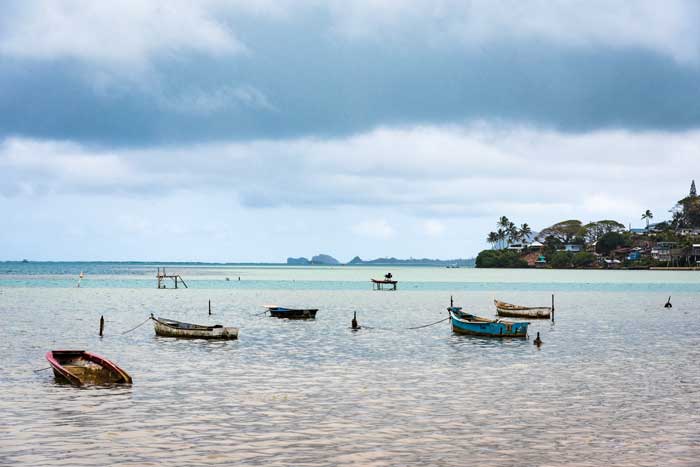 By the dock of the bay

Photo and caption by Tim Bracken

This photo was taken February 29th 2016, our friends got married that day in Laie. We took a drive south the morning of the wedding and the weather was overcast and raining off and on all day. This old boats bobbing in the water, the mountains behind, I couldn’t resist. In the end the sun popped out as if on queue. A beautiful day. This to me, that day, was Hawaii. 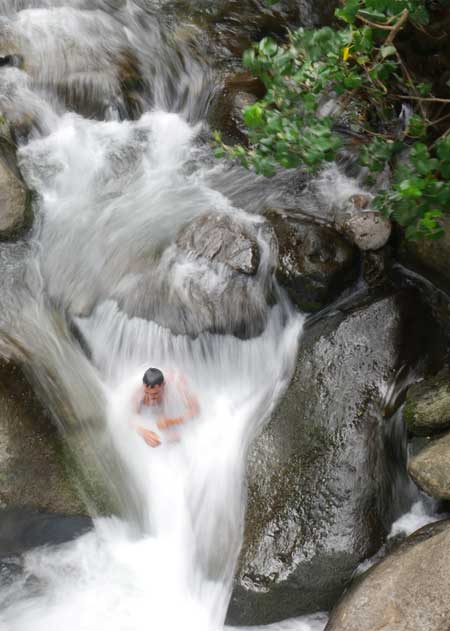 Photo and caption by Elton Au

My family and I were on a Maui trip this summer 2016. On the first day, we visited the Iao Valley State Park. It was a sunny and partial cloudy day. The scenic of Iao Peak is stunning, and my two daughters were having great fun for a “foot spa” with the running water by the stream. On the way back and overlooking on the walkway bridge, my attention was attached to a local man sitting on the ledge of a big boulder on the stream. He was enjoying the sun and seems very relaxed with the surrounding of the water flowing around him. Without hesitation, I picked up my camera and started shooting pictures on him. I was amazed when he made the move and submerged his body into a man-size naturally formed hole below the big boulder. With the water endlessly free falling over him, the picture is truly revealing the natural beauties and the best “whirlpool” on the Hawaiian Islands. 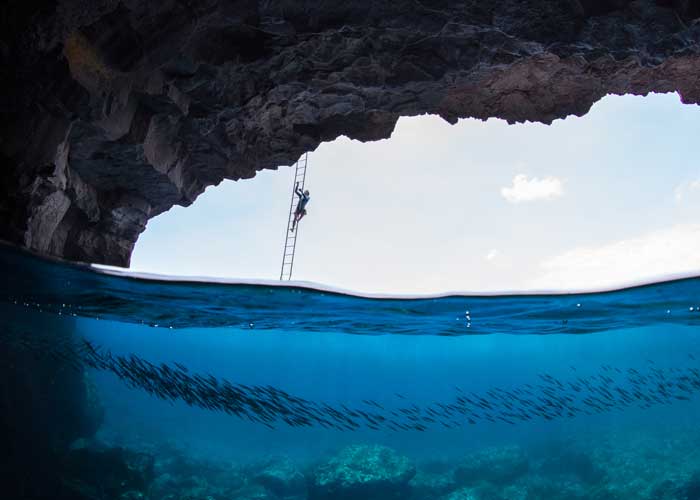 Ladder to the south

A man climbs up the ladder after jumping 40 feet off the cliffs at the southern-most point in the U.S. Below him, needle fish seek shelter from predators in a sea cave. 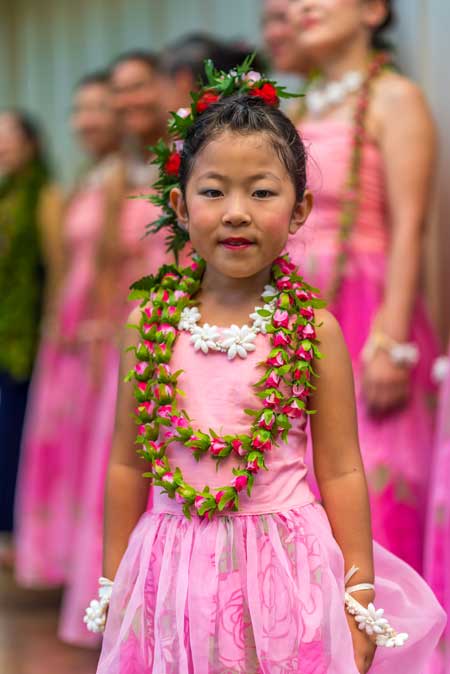 Photo and caption by Homer Hernandez

While visiting Maui, my wife and I, witnessed a beautiful performance by visiting Japanese hula dancers. While waiting out a storm, I noticed this beautiful young hula dancer. Her enthusiasm clearly demonstrated the importance of the Hawaiian culture both in Hawaii and internationally! 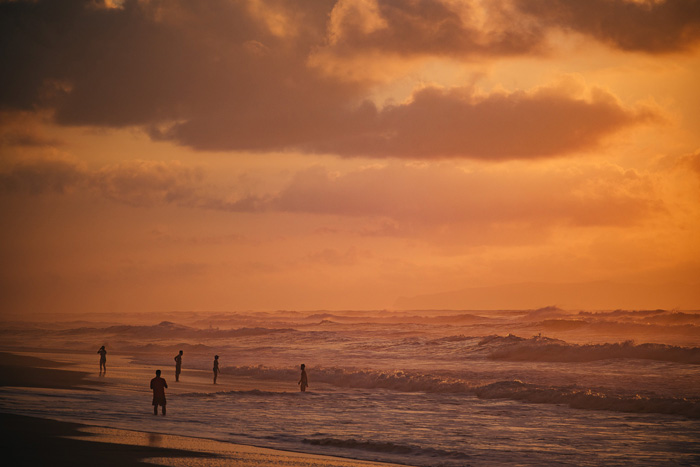 Photo and caption by Andy Stenz

Polihale Beach is a great place to catch the final light of the day. I was there photographing something else when I turned to see these people all enjoying the end of the day, and getting their toes wet (the waves were too large to be swimming in). I just loved the color that was wrapping around each and every one of us as the sky was on fire before the sun set. 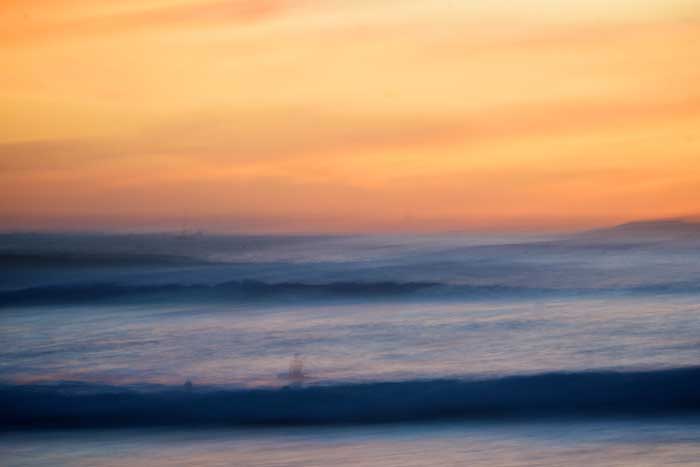 The setting sun at Queens beach and a slow shutter speed, combine to create a dreamy effect. I wanted to give the viewer the feeling of bobbing along the water slowly, waiting to catch the next perfect wave. 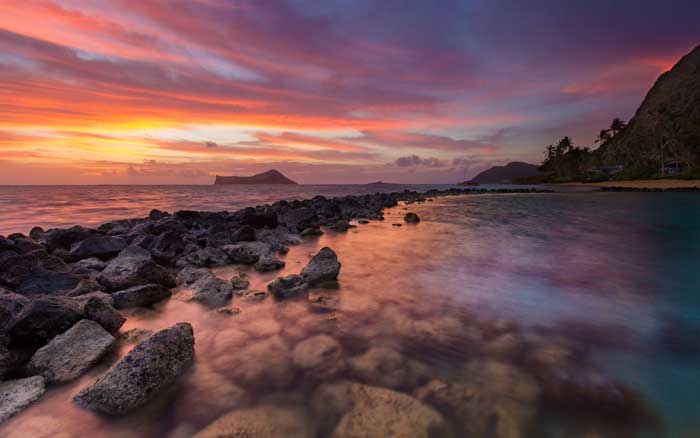 I really love taking photographs of places with a story. Hawaii is steeped with wonderful, ingenious culture such as these nearshore fishponds all over the islands. Pahonu was actually used to sustainably raise honu (sea turtles) for the alii (chiefs). An unbelievably beautiful morning such as this provokes such awe and facilitates reflection into the bravery and innovation of Hawai’i’s settlers. It’s an honor to photograph this spot. 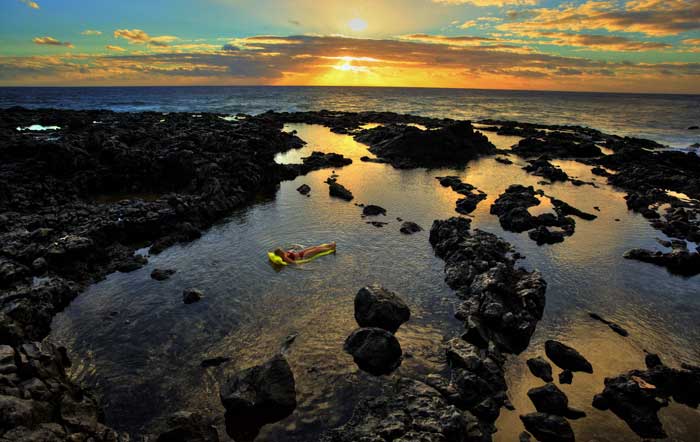 Relaxing in a tidepool

Photo and caption by Jeff Shindelus

My wife and I decided to hike to the tide pools in the dark to try and catch the sunrise. She brought her raft, which at first I thought was ridiculous. But it ended up really adding to this photo. We had the whole place to ourselves and had such a serene moment sitting there in silence watching the sunrise.