Two Hawaii musicians and the movie soundtrack for Hawaii-filmed The Descendants picked up Grammy Award nominations, which were announced this week by The Recording Academy. The 55th Grammys awards show will be staged (with a CBS broadcast) on Feb. 10, 2013.

Beamer (pictured, right), a Lahaina resident, told the Maui News that the album, which resulted from a creative partnership with PBS Hawaii, also feature his wife, Moanalani, who plays Hawaiian percussive instruments and Hawaii singer Raiatea Helm. On Pilialoha, which translates as a “close friendship or beloved companion,”Kekauoha (pictured, below), a Honolulu native, features several love songs.

The Descendants, a dramedy starring George Clooney — filmed on Oahu and Kauai — picked up an Oscar this year for best adapted screenplay. The screenplay is based on the best-selling novel by Hawaii writer Kaui Hart Hemmings.

Music critics have noted that The Descendants is the first mainstream American movie scored exclusively with Hawaiian music, most of it created by masters of the genre. The soundtrack features: Keola Beamer, Jeff Peterson, Cyril Pahinui, Gabby Pahinui, Ray Kane, Lena Machado, Sonny Chillingworth, the Rev. Dennis Kamakahi, and others. While the soundtrack does not include any new tunes, a few of the “pre-existing” songs were re-recorded for the movie’s score. 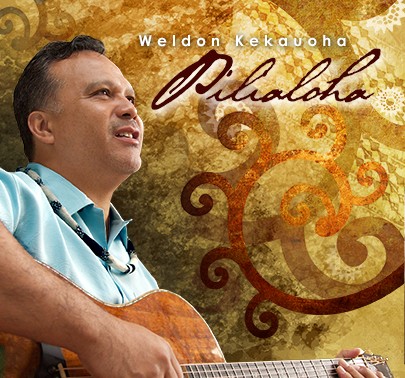 For more information about the Grammys — the only peer-presented award to honor artistic achievement, technical proficiency and overall excellence in the recording industry, without regard to album sales or chart position — click here.