The lava lake swirling beneath a crack in the earth at Halemaumau crater — Kilauea volcano’s summit caldera — is hitting its highest levels since the vent opened in 2008, according to the U.S. Geological Survey’s Hawaiian Volcano Observatory.

Yesterday afternoon, the lava lake rose within about 110 feet of the top of the nearly vertical vent. Since March 19, 2008, when an explosive eruption formed the lava lake, it levels have typically fluctuated between 230 feet to 490 feet below the crater floor.

Over the last few weeks, however, the lake’s levels have fluctuated but have remained high. On Oct. 14, the lake was measured at about 150 feet from the top of the crater’s 520-foot wide cylindrical vent.

VIDEO: This 44-second video, taken during a recent helicopter overflight of Halemaumau, shows vigorous spattering on the lake margin and the emission of a thick plume of gas on the rarely seen southern side of the pit. To watch video, click here. 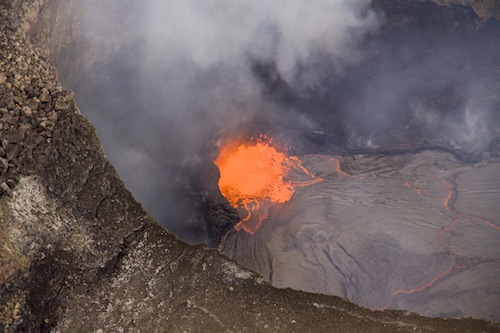 In recent news reports, Jim Kauahikaua, scientist-in-charge at the Hawaiian Volcano Observatory (HVO), said: “If this trend continues, we may expect the summit lava lake to continue rising slowly until there is a rupture somewhere within the subsurface transport system, carrying
magma to the east rift zone eruption site.”

A news release issued by Hawaii Volcanoes National Park, Kauahikaua said the lava lake will be visible from the overlook at Jaggar Museum if it comes within about 65 feet of the crater floor.

Until that happens, daytime visitors can check out the constant ash and gas plume emanating from the Halemaumau crater. And nighttime visitors gathering in the museum’s overlook area are likely to catch a glimpse of the brilliant glow that lava beneath the surface casts upon clouds and the plume of volcanic gas.  All after-dark park visitors are urged to bring flashlights.

Park officials also note several pairs of nene, the federally endangered Hawaiian goose, are beginning to nest near the Jaggar Museum parking lot, and are sometimes spotted along roadsides and trails. Motorists are advised to watch out for the goose and drive the speed limit.

Park Superintendent Cindy Orlando said: “We encourage everyone to visit during this fascinating episode, but to exercise caution. Staff will be assisting visitors with parking and interpretation of the current activities. If people come prepared and proceed as directed, they should have an unforgettable experience.” 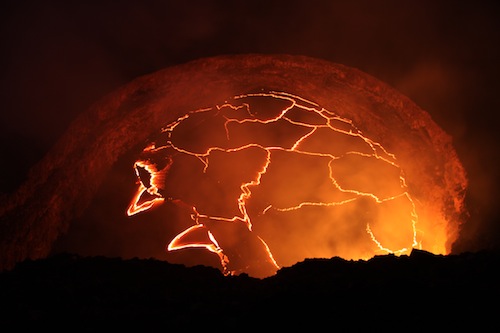 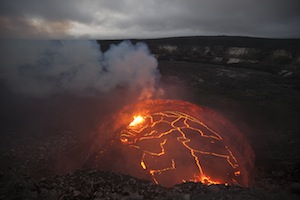