Scientists at the Big Island’s Hawaiian Volcanoes Observatory have released timelapse and thermal videos that capture the scene of this week’s lava-filled collapse of the Puu Oo crater floor in Kilauea volcano’s east rift zone.

On Wed., Aug. 3, the domed floor of Puu Oo crater started to subside at about 2 p.m. About 15 minutes later, lava burst from the west flank of the Puu Oo cone, flooding downslope areas and forming a branched flow (pictured, above).

“The weaker northwest branch flowed into the forest on the north side of the rift zone while the much more vigorous south branch quickly moved downslope along the west side of the Mother’s Day flow field (formed May 12, 2002), advancing about 2.2 miles within about three hours,” according to observatory reports. (Scientists have noted that preliminary lava production estimates are at least twice the rate of the 2002 Mother’s Day flow, which was similar in scenario to Wednesday’s eruption.)

Although the lava flow has now slowed, scientists maintain that, based on similar past events, the flow might last from days to weeks or months. The volume of erupted lava has already equaled, or exceeded, the volume of the Puu Oo crater collapse, so the flow is possibly being fed directly from the rift zone, according to observatory reports.

(You can check out the timelapse and thermal videos, recorded on Wed. Aug. 3, at the bottom of the page.)

As scientists tracked the refilling, they noted the development of the perched lava lake, which has resembled an above-ground swimming pool. In early June, the lake’s levee climbed to a height of about 33 feet above the crater floor. At that time, the floor was about 170 feet below the crater rim. Subsequent lava lake overflows pushed the full crater floor closer to the rim. In late July, lava erupting from vents within Puu Oo filled two small pits just west of the crater and spilled out, feeding a small lava flow toward the southwest. 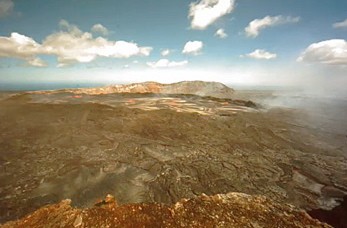 VIDEO: The timelapse video’s footage, taken from a webcam on Puu Oo’s north rim, starts at midday on Wed., Aug. 3, with the normal westward flow of lava within the crater’s perched lava lake. Just after 2 p.m., breakouts start and the lake begins to drop. By the end of the video sequence, the lava lake is gone and floor has dropped about 260 feet. At about 3:15 p.m., a portion of the rim — at the right end of the frame — collapses into the crater. (Click on the frame above to watch.) 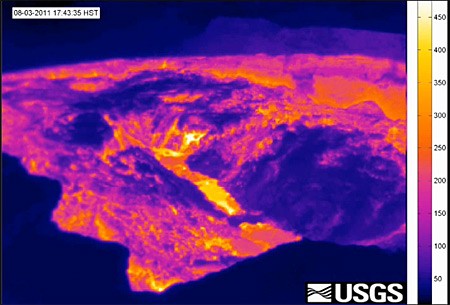 VIDEO: The thermal video’s footage, taken on Puu Oo’s south rim, also starts at midday on Wed., Aug. 3. It depicts the abrupt drop of the lava lake and surrounding floor, with solidified portions of the crater floor sliding into fluid lava. By the end of the sequence, the floor of the crater is composed of only hot rubble and blocks of the pre-existing crater floor. (Click on the frame above to watch — the temperature scale is degrees Celsius.) 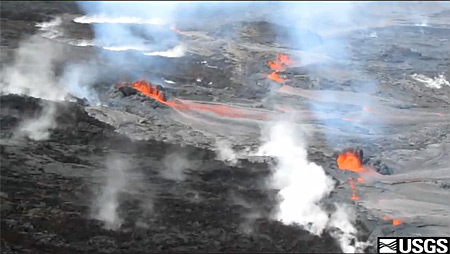 VIDEO: Spattering vents neighboring Puu Oo crater on Aug. 4. (Click on the frame above to watch.) 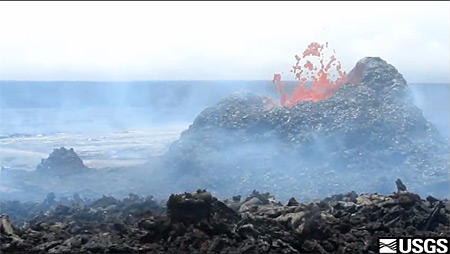 VIDEO: A montage of activity at individual spattering vents near Puu Oo crater on Aug. 4. (Click on the frame above to watch.)
Categories: Hawai‘i Island