Leomana Turalde is a hula dancer for Kawailiʻulā, a hālau (hula school) in Kailua, Oʻahu. Turalde is from Keaukaha on Hawaiʻi Island.

I love when the clock hits eight on that Merrie Monarch Sunday. It’s such a freeing feeling. The first shot of adrenaline for the week.

By this time I’m usually 30 minutes deep into Kawailiʻulā videos. Not to watch and practice, but to compete. I’m 28. My mom is a hula dancer. My dad is a master carver. We manage a cultural learning center in Lihikai at Onekahakaha Beach Park. Hula is definitely something I’ve done as a kid, but I didn’t want anything to do with it. I was forced into it by my parents. Just not something I enjoyed or wanted to do.

It wasn’t until after joining the Marines and I began traveling, I realized I was born in the most amazing place in the world. Twenty seven countries, 42 states, five war zones, the Arctic Circle, the North Pole, circled the globe twice, and I’ve never seen a place as beautiful as the Hawaiian Islands. I’ve been privileged to see many cultural events in doing so—you see the differences, but you also see how we’re all the same. I’m humbled to be so lucky to be born in Hawaiʻi. To be part of what I believe is the most amazing culture in the world. When I got out of the Marines, something in me told me to get back to my culture.

Traveling the world I claimed to be Hawaiian, I claimed to do all of this stuff. I had the knowledge and I could speak on it, but I didn’t feel like I was part of it. Or that I deserved that respect. I didn’t know who kumu hula (hula teacher) Chinky Mahoe was at that time or about the hālau. I just wanted to do something Hawaiian. Since I’m an athlete, I decided on hula. I gave him a call and about two weeks into practice and learning who my hālau Kawailiʻulā was—stepping into the studio for the first time and seeing all the Merrie Monarch trophies—I was like, oh my god, I just stepped into an intense hālau, man. 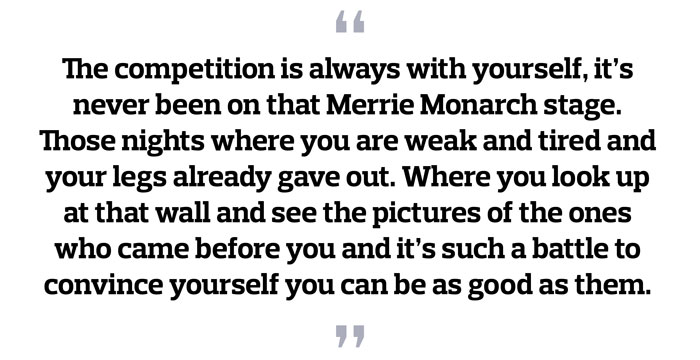 Our practices are brutal. About four to five days a week, five hours a day. Nonstop, no water breaks, no breaks at all. Every Wednesday it’s three straight hours of just doing basics—kāholo, ʻuehe and hela, that’s it. We have a super athletic, agile, explosive, level changing, endurance demanding style of hula, which stems from Waimapuna and kumu Darrell Lupenui. I’ve definitely had those days where I wish I could sit out of practice. Where my legs give out. Or people behind me are just falling down crying. I have an attitude of don’t quit, that I have to push myself so that I can lead and set a good example for the people who maybe can’t physically, mentally or emotionally handle it. If I keep on keeping on, maybe they’ll see and be inspired to believe they can too.

I honestly don’t remember my first time in competition or much of the kahiko (traditional) night. What I remember most is the ending. Like any other dancer that’s competed in Merrie Monarch will tell you, once you hit the stage you kind of just go blank. You don’t realize what happened until you hear that last paʻi (beat) of the ipu (gourd). After our mele (song), we stood there for a while—maybe a minute, maybe 30 seconds, I’m not sure how long it was—the crowd dimmed down. Then as we were standing there the crowd just suddenly grew louder and louder and I was like, oh my god, what is going on? They just kept cheering—they went crazy!—and I was like, this is amazing. This is an amazing feeling.

When we did our hula noho (seated hula) number with the pūniu (small knee drum) in 2013 and won everything we possibly could … I don’t like to watch myself dance, but about a year later I watched it for the first time and that’s when I actually fell in love with hula. I finally understood what it was. It encompassed to me every aspect of hula—body movement, your leo (voice), your ʻike (knowledge), your expressions, utilizing the tools that we have like the stage, instruments—everything that you can.

Hula is the path I choose to live my life in. You don’t need to be Hawaiian, either. One of my hula brothers Andrew, we call him Kupaʻa, is one of my biggest inspirations. He moved here from California to dance hula with Kawailiʻulā and to me that was like, wow, this guy, who’s not Hawaiian, moves from there to here to dance—I should probably take my culture a little more seriously. Every practice till today, me and him will sit down and talk about hula and culture and movement, wonder about how we think hula got started, and we’ll do that for hours and never get tired of it, talking about the same hula things over and over.

Dancing and being Hawaiian is just the path that I chose to understand life. Rituals, culture, practices, the things we do—it helps me with the spiritual side of my life. I’m not religious, but I feel that connection, to the plants, the animals, the elements, how to connect and give back. My way is through hula. Our kumu hula always talks to us about that. It’s never about the competition. It’s about giving back to your people, to Akua (God), the people who support you along your journey, and giving back to the community and giving back to Hawaiʻi. I’m very grateful to my hālau for that.

The biggest impact on my life is my daughter. She just started dancing because she watched me live for the first time last year at Merrie Monarch. She dances for kumu ʻIwilani Kalima of Hula Hālau O Kou Lima Nani E. She learned “Holoholo Kaʻa,” her first ʻauana (modern hula dance). This past Easter, I jumped on my guitar and I started playing. She started dancing, and I started crying. I was thinking, how amazing is hula that I get to share it with my daughter. That I dance, and she dances. A way we can connect on a deep emotional level because we both share a love for something. She saw and was like, what’s going on? I just said, I love you, and this is a connection I’m going to cherish forever. You may not understand it because you’re nine, but when you’re almost 30 like me, you will.

I’ve always wanted to leave something behind for my culture. Whenever I’m having a hard time or hurt or feel like not going to practice I always put on my hālau’s Merrie Monarch videos, our practice videos and I get inspired. I just want to be part of this legacy, which is Kawailiʻulā. I know this hālau is special and maybe 100 years from now when I’m not here, a new generation will think about hula and those who came before the same way I do with the people who came before me. Me and my hula brothers sit down after practice for two, three hours sometimes talking about those men, till 2 o’clock in the morning, about how inspired we are when we watch them. How amazing they are. How they inspire us still to dance. I hope to give future dancers the same. To be better. To push harder. To just do what they need to do. Because the more you work, the more you give, the more you suffer in your art, the more appreciation you get out of it.

The competition is always with yourself, it’s never been on that Merrie Monarch stage. It’s on the dirty cafeteria floors with the ick still on them. Those five hour practices with no H20, endless pushups and bloody knees. One-hundred-and-three degree fevers that usually hits someone two weeks out. Losing dads and moms. Those nights where you are weak and tired and your legs already gave out but you still have backwards, forward, and sideways duck walks in three of the five verses. Those nights where you look up at that wall and see the pictures of the ones who came before you and it’s such a battle to convince yourself you can be as good as them. That you can live up to their hype.

Then the pressure to do the best you can because it’s not just dancing. It’s the very life of our culture. The heart beat of our people. Knowing that every Hawaiian blood or non-blood, is watching you, judging you, making sure you pass on the most magical culture in the world. Everyone having an opinion on what you do whether you win or lose. Then realizing that this past year has been the strongest movement of kānaka Hawaiʻi (Hawaiian people) ever. Saving mountains, protecting spaces and even trying to govern ours. Being Hawaiian isn’t just having the blood. It’s living the life you have through the culture we are blessed to have guide us on our journey.

— As told to Matthew Dekneef

What to Know About the 2022 Merrie Monarch Festival