The first YMCA was founded in London 175 years ago. Twenty-five years later, the Y opened in Honolulu, over 7,000 miles from London in the middle of the Pacific Ocean. Word travels when somebody thinks somebody else is doing something right.

Now, 150 years later, the Honolulu Y remains a bedrock, providing comprehensive social service programs like gang prevention, housing for the homeless, youth leadership programs, and counseling for young people struggling with drug addiction. And all that’s on top of its swim and fitness programs, summer and day camps, early learning and before- and after-school programs, and the many community events hosted in its facilities.

Michael Broderick, a former family court judge, was so impressed with the work of the Y that, in 2010, he left his seat on the bench to take the helm as the Y’s president and CEO. “The hardest part of being a judge was the suffering I saw—addiction, domestic violence, day in and day out, sometimes as many as 30 or 40 cases a day,” he says. “I came to believe I couldn’t help these people, that it was too late.”

Of all the organizations and opportunities Broderick could have chosen, he chose to spend what he calls the “last part of his career” at the Y. He believes it offers the best chance to create systemic change, to ameliorate the circumstances facing families and children and point them toward a better future.

Broderick knows the Y’s reputation in the communities it serves — the go-to spot for “swim and gym” and community gatherings. And it’s not that he’s not proud of that. He is! He’s quick to talk about the humming buzz at Y facilities: kids playing, sports teams and adults working out, a full swimming pool and a lively array of chess games and birthday parties and moms with strollers visiting and catching up.

But what he really wants people to know is that lives are being changed, even saved, by the work of the Y. “If I’d not been on the bench for all those years and learned all I did, I could have never done this job,” he says. “Here, I see it every day: the youth leadership being nurtured, the drug treatment work keeping kids out of family court, programs keeping people out of the hospital.”

Broderick admits it’s tough work, and it’s not always easy. “It’s hard to stay optimistic. It’s hard to not be discouraged by all the problems we see,” he says, his voice trailing. But then he hears from young people who know better, and it’s a powerful motivator. “Young adults come up to me on the street all the time and tell me the Y saved their life. I know it’s working. I know we’re making a difference.”

Today, the Y faces another transformation—selling its property near Ala Moana Center and investing in other areas of need, including a new permanent facility in Waianae supporting young people with substance addiction, and offering teen programs and a sports court. They’re reimagining the Nu‘uanu facility, looking to ensure it reaches the entire community. And they’re revitalizing Camp Erdman, a mainstay for generations of Hawaii children, renovating cabins and facilities.

In 1869, men like Sanford Dole, Peter Cushman Jones and Thomas Rain Walker brought a good idea from London to Honolulu. They could see the needs of the young sailors, new immigrants, and young people living in such an isolated spot. They believed the Y could help, and they created what came to be known as the most diverse YMCA in the world, as early as 1918.

Today, as Broderick and his team celebrate 150 years, they’re not looking back. “We have to evolve,” Broderick says, “to address current critical issues and help those we can.” As for retirement, it doesn’t even cross his mind. “There’s still work to be done, so I’m sticking around,” he says. “Besides, I only lead the charge—1,400 people with me do the real work.”

YMCA Through the Years 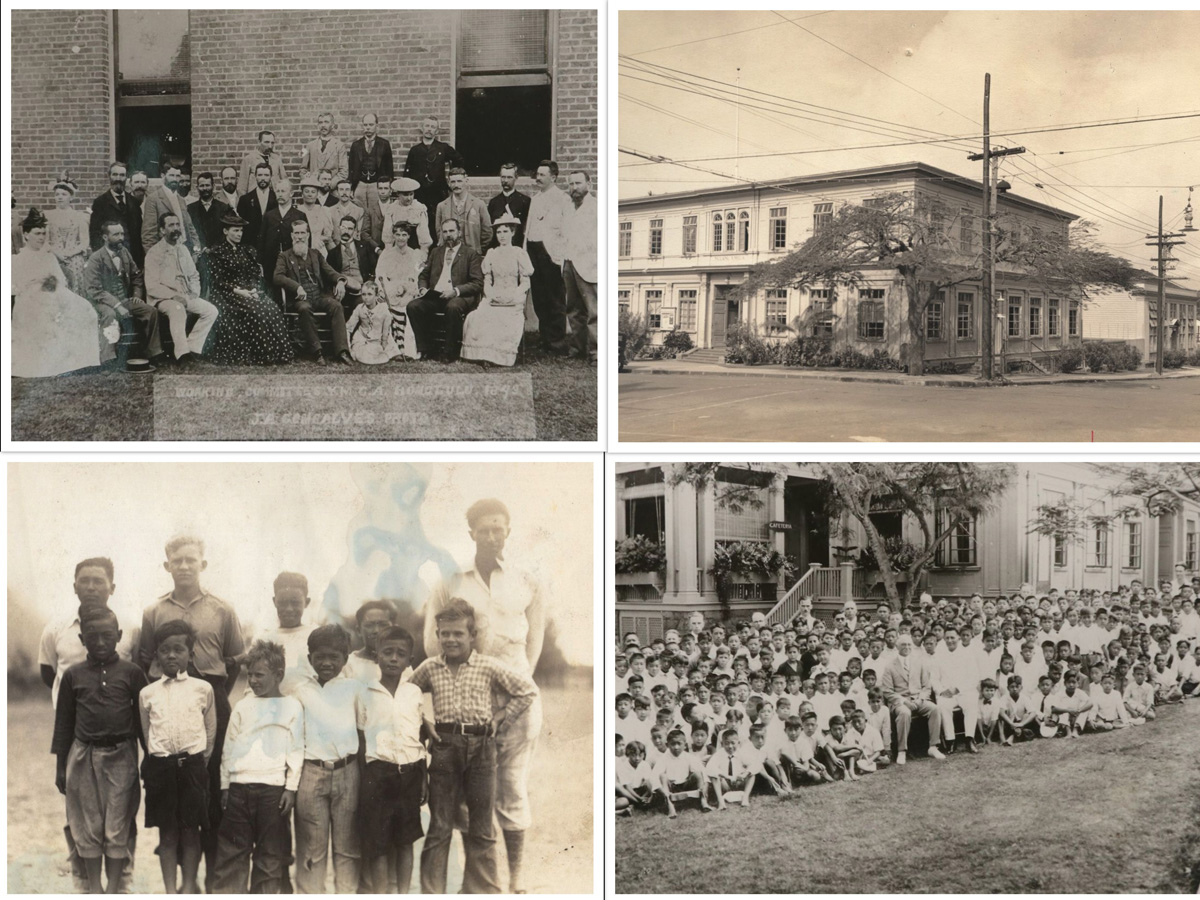 1893: Working Volunteer Staff Committee. The Y was founded, led and built by the generosity of volunteers at every stage.

1918: The original Nuuanu Y was built in 1918 on the corner of Fort St. and Vineyard Blvd. (where Safeway and Long’s is located today). Founded by five YMCA leaders who made the historic decision to combine the separate Japanese, Chinese, Korean and Filipino YMCA associations into a new single building where all would be welcomed – the Nuuanu Y was recognized as a landmark achievement for racial integration throughout the YMCAs in the United States. 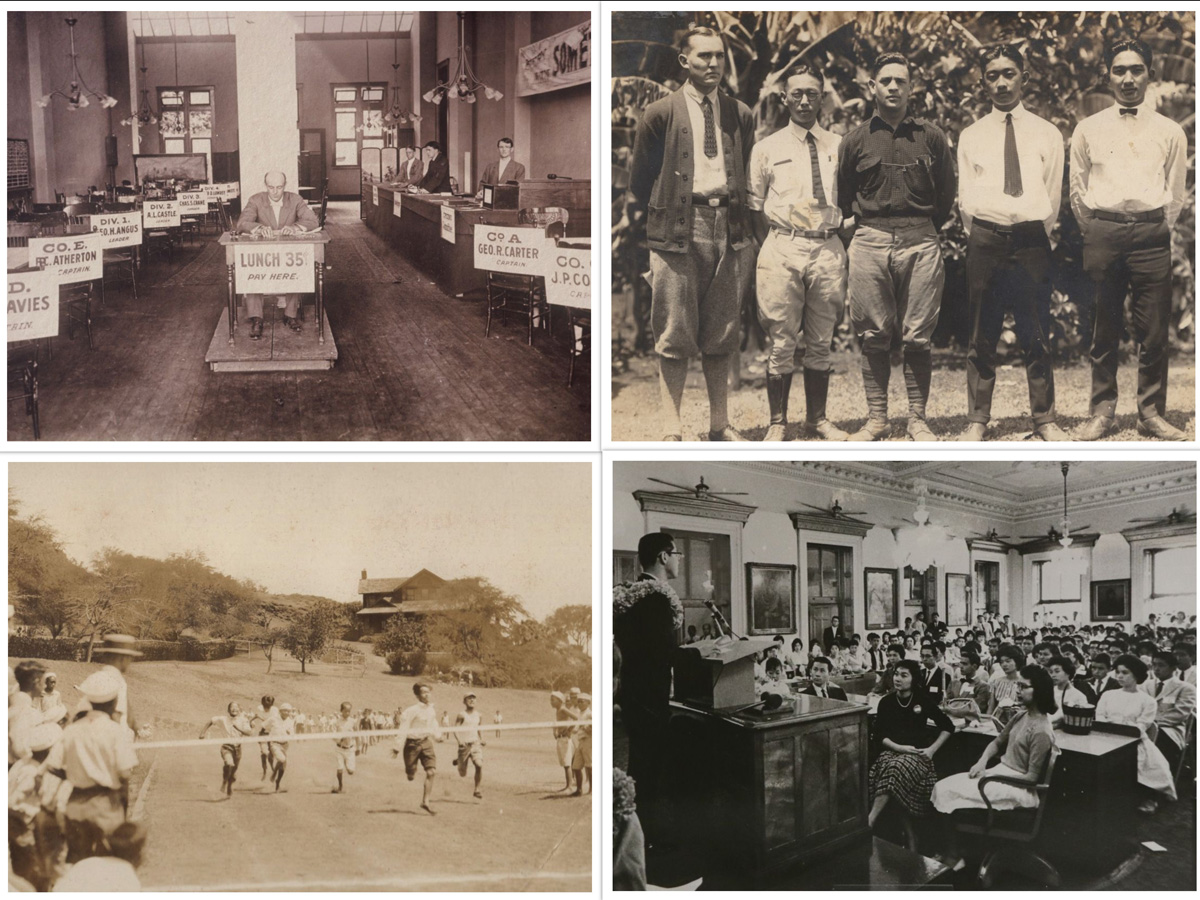 1910: Campaign Report Meeting. The first YMCA of Honolulu “Capital Campaign” took place on September 15, 1881. The YMCA of Honolulu was 12 years old, but lacked its own building. At a meeting, founder Peter Jones threw out the first challenge – he’d donate $500 towards the purchase of property if others would pitch in. In 2 minutes, $2,170 was raised. A committee was formed to raise the rest; and the first YMCA building was built for a cost of $14,000.

1921: Students at a University YMCA conference in Kaneohe.

Date Unknown: Track Meet at Punahou School. Rural Boys’ Club youth looked forward to track meets as it was an opportunity to travel into “town” for sightseeing and swimming in the pools at the Central Y and Nuuanu Y.

1961: Youth Governor, Steven Yamani, addresses the Youth and Government student legislative delegates. Started in 1951, it was then known as Model Legislation. The program continues.