Because a local plate lunch without mac salad is unthinkable.

Macaroni salad is a staple of the Hawaii-style plate lunch.

Typically scooped onto lunch plates along with a couple mounds of white rice, the seemingly divergent starches combine forces as ideal pairings to just about any main dish.

A Hawaii-style barbecue chicken or beef mixed plate without a scoop of mayonnaise-laden mac salad to mix into some of the grilled meat’s sweet-and-tangy shoyu, sugar, garlic, ginger marinade? To many Hawaii residents, as unthinkable as not being able to soak up the same sauce with a forkful of white rice.

Making Hawaii-style plate lunch mac salad is easy. The bonus? Once you learn the basics, the recipe can be adapted into an endless array of variations depending on your individual tastes.

Here, we’ll get you started with two basic recipes for Hawaii-style macaroni salad and a history of the popular local side dish, excerpted from the new book Kau Kau: Cuisine and Culture in the Hawaiian Islands.  The book, by Hawaii writer Arnold Hiura, is chockfull of the history and stories of favorite Hawaii foods, much of it accompanied by terrific family recipes you can try out for yourself.

In a previous article, we excerpted a Kau Kau recipe for Hawaii-style barbecue (teriyaki) sauce and brief history of the popular local grilling marinade.  With the macaroni salad recipes on the following pages, all you’ll need is a pot of hot white rice for your own Hawaii-style barbecue mixed plate lunch or dinner.

Hawaii: Where Mac Salad is King
(excerpted from “Kau Kau: Cuisine and Culture in the Hawaiian Islands,” by Arnold Hiura, Watermark Publishing, 2009. Reprinted with permission.)

Even the most casual survey would confirm that Hawaii’s diverse local cuisine is held together by two elements common to all plate lunches—rice and macaroni salad. It makes sense, as both of these foods are relatively bland and nicely complement just about any form of flavorful entrée, from teriyaki and beef stew to adobo and kim chee, and beyond. 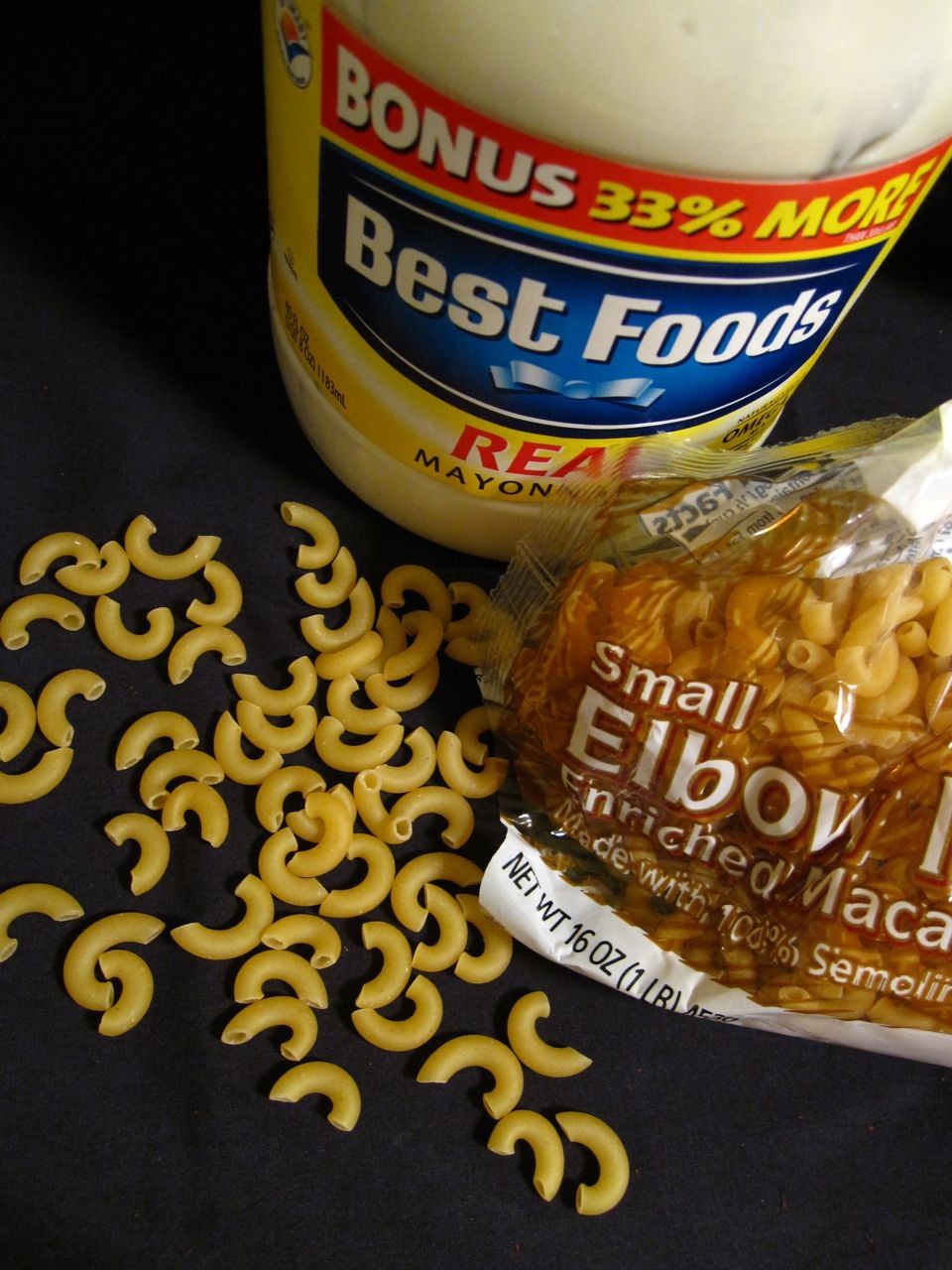 Yet, for its irrefutable importance and enduring popularity, no definitive tale of macaroni salad’s origin can be told. Simply based on its main ingredients—pasta (Italian) and mayonnaise (French)—one can infer that macaroni salad’s genealogy is rooted in Europe. Potato salad, a likely relative, is also European—specifically German—in origin.

Cookbooks document the popularity of macaroni salad recipes across Mainland America in the early 20th century, and some observers have noted that Mainland chefs were being recruited to run Hawaii’s top hotels and restaurants during the same period, bringing their European-influenced culinary backgrounds—including macaroni salad—with them. Others speculate that sugar and pineapple plantation managers and supervisors, who were mainly of European descent, instructed their domestic help, mainly Asian immigrants, to prepare their beloved potato salad. Both theories are plausible, and it is possible that macaroni salad had more than one genealogical path to Hawai‘i.

Whatever the original dish, the local population eagerly adopted it and set about customizing it to local tastes. If it did originate as potato salad, dried macaroni noodles were cheaper and much easier to obtain and could be stored for longer periods of time than potatoes, so it’s no wonder that they eventually replaced potatoes in the local interpretations of the dish. 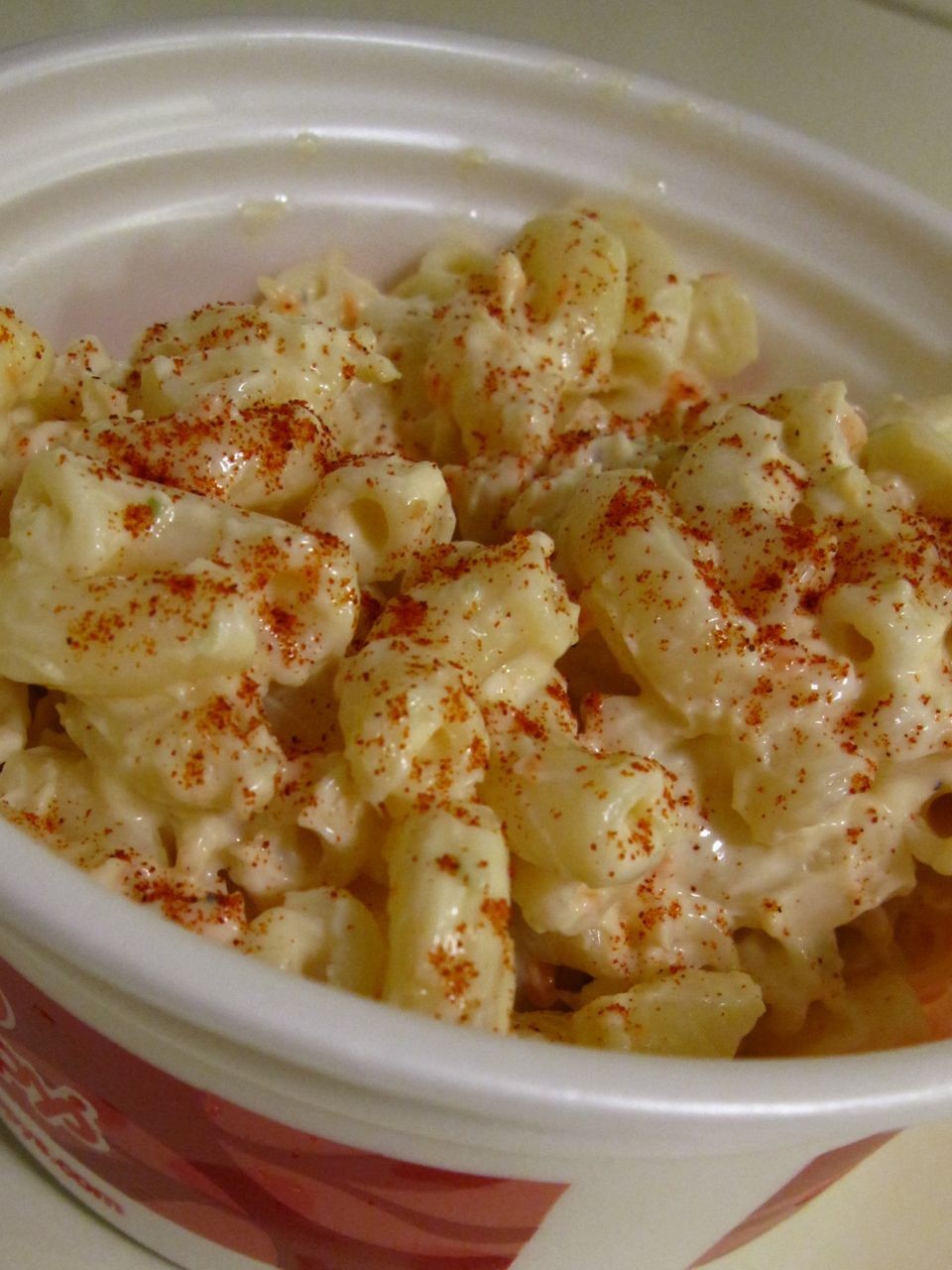 The local-style macaroni salad also featured mayonnaise—and lots of it. Mayonnaise could be made rather economically at home using vegetable oil and egg yolks, which meant that the entire dish was relatively inexpensive to produce, helped to stretch a family’s food budget and tasted good as well.

While the flavor of some foods may vary by ethnic group or by island, macaroni salad tends to vary from cook to cook—even cooks following the same recipe. Many people swear by specific brands of mayonnaise, while others claim that the flavor changes when they prepare the dish anywhere outside of the Islands—even if they have hand-carried the ingredients from Hawai‘i! There are literally hundreds of variations on macaroni salad: Do you prefer fat elbow macaroni or thin spaghetti noodles (not exclusive to but very popular on Kauai)? Plain macaroni or potato-macaroni? Frozen peas and carrots? Celery? Onions? Canned tuna? Artificial crab? Real crab? Hard-boiled eggs? How many? Relish? Mustard? What brand of mayo? Can you ever have too much mayo?

The beauty of macaroni salad is that it is quite forgiving and welcomes a wide range of personalization and experimentation. It’s a casual dish that easily adapts to any type of food or occasion—it is, in other words, quintessentially local.

To make a basic macaroni salad, you don’t need a recipe; just follow these guidelines:

The pasta: Cook 1 pound elbow macaroni (for really local style, cook until soft and fat, but you can go al dente if you prefer).

The flavoring: Stir in ¼ cup very finely grated onion. Not minced, chopped or sliced—grated. It should be liquidy (this is how they do it at Diner’s, a local eatery in Kalihi).

The mayo: At least 2½ cups for real local style. But there are no rules, so use less if you like. Or more.

The finale: Salt and pepper, to taste. Stir well; refrigerate. 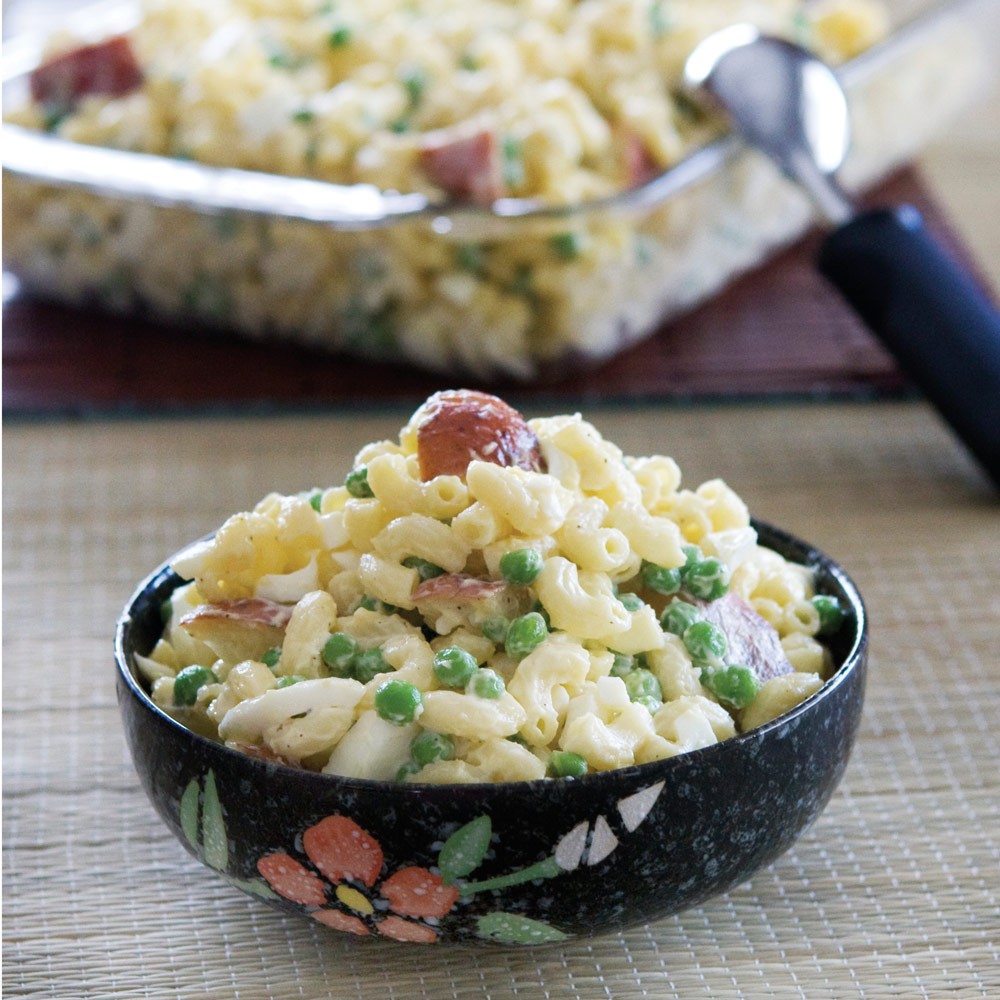 Cook macaroni according to package directions; drain. Separate egg yolks from egg whites. In a small bowl, mash yolks and chill. Chop egg whites; put into a large bowl with macaroni and potatoes. Stir in salt and vinegar; chill overnight.

Serve Delicious Seafood Lau Lau this Holiday Season, or Any Time of Year