How to make Hawaii-style barbecue (teriyaki) sauce. A recipe.

Order a barbecue mixed-plate lunch at a casual Hawaii eatery and your meat will probably be slathered with this sweet-and-tangy reddish-brown sauce.

Order a barbecue mixed-plate lunch at a casual Hawaii eatery and it’s doubtful you’ll get a heaping helping of smoked chicken or ribs slathered with sweet-and-tangy reddish-brown sauce. And don’t expect corn on the cob, coleslaw, baked beans or rolls on the side either.

What you will get, probably piled on a bed of white rice and accompanied by a scoop of macaroni salad or tossed salad, is a large platter of grilled meat or chicken, sweet-and-tangy from a marinade of shoyu (soy sauce), sugar, and fresh garlic and ginger. It’s often called Hawaiian barbecue sauce—or teriyaki sauce—on the Mainland.

Done right, neither sauce is a cut above the other. But the thick, smoky-spicy-tangy variety isn’t the kind of barbecue sauce a number of HAWAII Magazine readers have begged us to find them a great recipe for.

We’ve finally got one—straight out of a new book called Kau Kau: Cuisine and Culture in the Hawaiian Islands. (As of February 2020, there’s a new, 10th anniversary version of the book, available here.) “Kau kau” is the go-to Hawaii pidgin word for food, likely derived from the Chinese phrase “chow chow.” Kau Kau, the book, is all about Hawaii food. In particular, the astounding mix of foods first brought to the Islands by multi-ethnic immigrant sugar and pineapple plantation laborers more than a century ago that are still popular Hawaii comfort foods today.

The book, by Hawaii writer Arnold Hiura, covers a good deal of the history and stories of favorite Hawaii foods (from entrees to snacks to desserts). Hiura speaks with chefs, foodies and farmers about local cuisine and includes lots of great photos of the Islands’ most beloved foods. 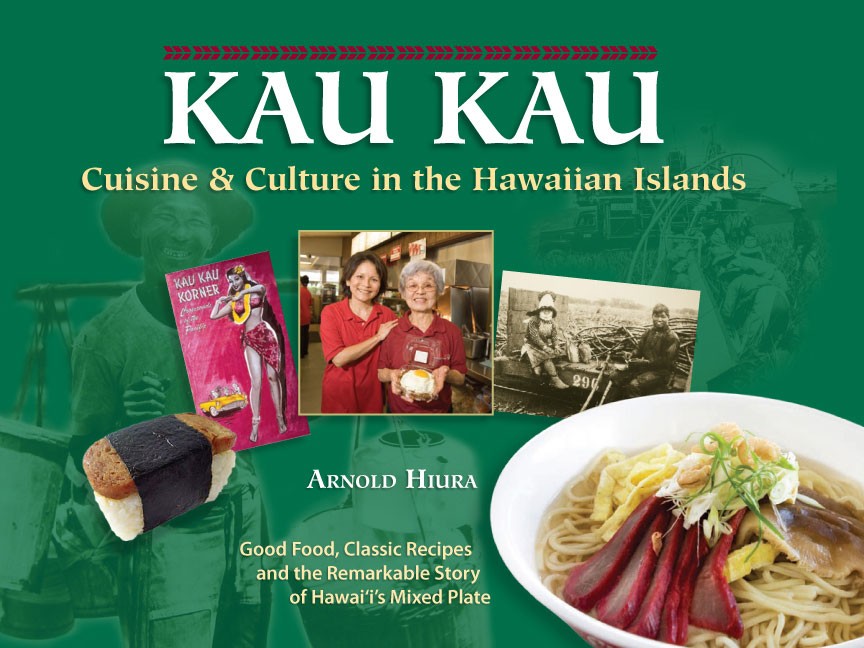 Kau Kau: Cuisine and Culture in the Hawaiian Islands won’t be in bookstores or online retailers until January. But you can order a copy direct from the publisher, HAWAII Magazine sister company Watermark Publishing, here. Regularly priced at $32.95, Watermark is offering a special pre-order price of $30 and express holiday shipping until December 15.

Here’s an excerpt from Kau Kau about Hawaiian-style barbecue (teriyaki) sauce, followed by a terrific family recipe for the marinade that you can make at home.

In the Islands, some form of local “barbecue” sauce (i.e., teriyaki) might just be the most popular and versatile means of flavoring any combination of meat, poultry, seafood, and vegetables. Many recipes (including classics like beef tomato, chop steak or pork tofu) rely on some combination of shoyu, sugar, ginger and garlic. Therefore, I am proud to share what is possibly one of the all-time, all-around best local-style teriyaki sauces ever created. My father-in-law, Larry Nakama, passed his legendary teriyaki sauce recipe on to his children, and his daughter, Eloise Nakama Hiura, describes it here:

Dad used a one-gallon glass mayonnaise jar to make his teriyaki sauce. He kept the sauce handy and used it in preparing all sorts of dishes until it ran out and he would have to whip up another batch. I recall my first lesson in making the sauce was to learn how to “eyeball” the ingredients and taste the sauce in between to adjust—Dad didn’t measure anything. 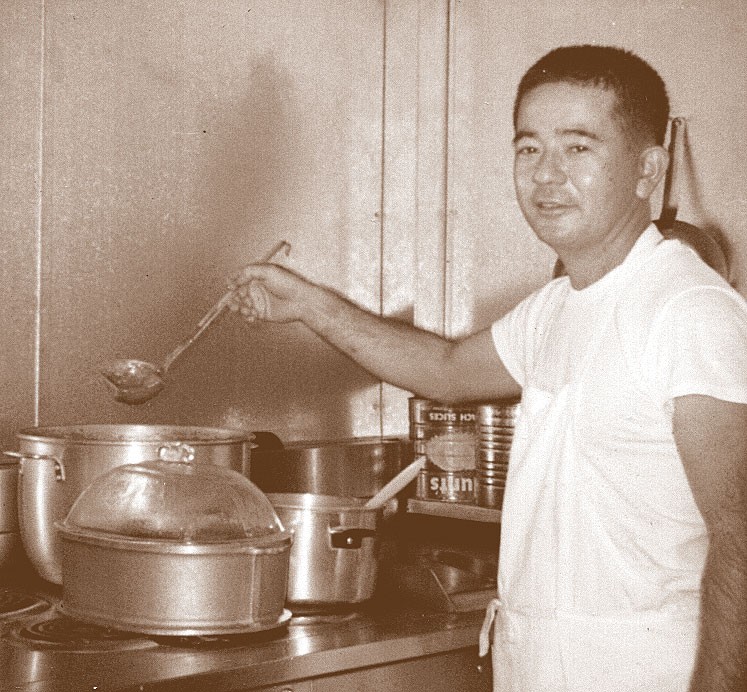 First, he poured the shoyu in, about 2/3 of the jar. Second, he added the sugar until the mixture rose to fill ¾ of the jar. Third was sherry wine (my sister Joan says other types of wine could be substituted, but I remember Dad specifically sending me to the store for sherry). The sherry raised the mixture about another inch above the previous level. Then he lined the lid with wax paper, covered the jar and shook it to mix the ingredients. Next, he tasted it to see if he needed to adjust the flavor with more shoyu, sugar or sherry.

Finally, Dad poured some oil in a skillet and, while it was heating, peeled and crushed some ginger and cloves of garlic. He would brown the ginger first and scoop it into the jar; then he browned the garlic and poured it in. Of course, not everyone can get their hands on a gallon-sized glass mayonnaise jar, so—as best as we can tell—here is Dad’s recipe translated into measurable form: 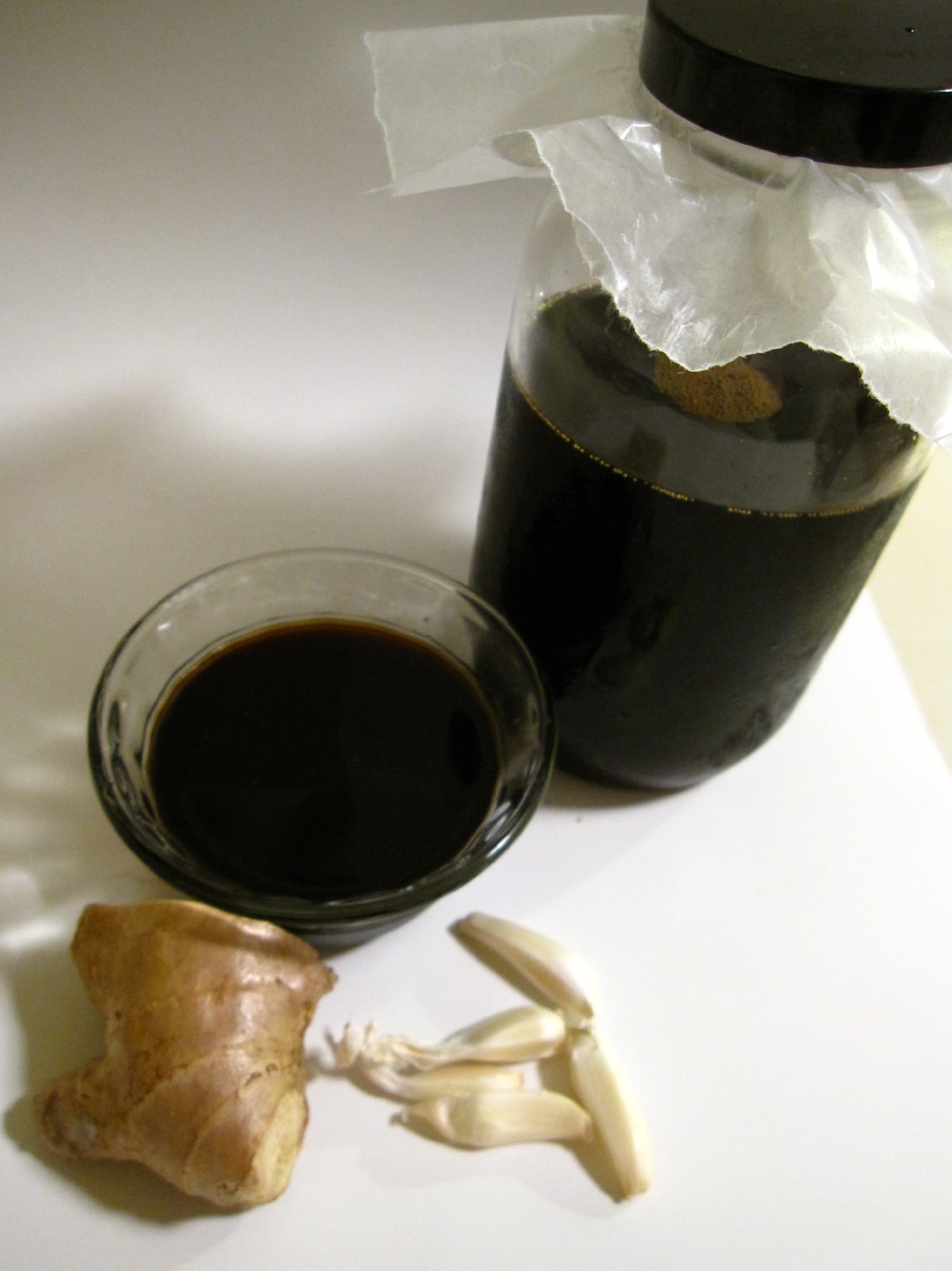 This might seem like a lot, but believe me, it is a blessing to have this all-purpose sauce prepared and ready for any situation. You can use it full strength as a marinade for meat, chicken, pork or seafood, or cut it to taste with water (try about three parts sauce to one part water) to stir-fry anything—vegetables, noodles or rice. Using the same three-to-one ratio, you can make my father’s ‘ono shoyu pork or shoyu chicken.

We’ll be posting more recipes for favorite Hawaii foods from Kau Kau: Cuisine and Culture in the Hawaiian Islands on HawaiiMagazine.com in the weeks ahead. Hope you’re hungry!