Oʻahu Beaches, Parks and Trails Open to Groups of Five on Sept. 24

Oʻahu eases some restrictions on its latest stay-at-home.

Oʻahu eases some restrictions on its latest stay-at-home, work-at-home order starting Sept. 24, including allowing up to five people to hit trails, beaches and parks together.

This comes after the Hawaiʻi Department of Health officials today reported 63 new coronavirus infections statewide—55 on Oʻahu—bringing the total number to 11,522 cases. Today marks the third day in a row that the statewide count fell under 100.

Beaches, parks, botanical gardens and trails on Oʻahu had been open to only solo activity since Sept. 10, after a surge of new cases on Oʻahu. On Thursday, groups of no more than five can use these outdoor spaces for what the city calls “lawful activity,” which includes exercising, reading, sunbathing and picnics. But if people want to set up a canopy at a city park, they will have to apply for a permit.

Honolulu Mayor Kirk Caldwell announced today a new tiered approach to reopening, which will be based on number of daily cases reported and the positivity rate. Here are the four tiers:

Oʻahu is currently in Tier 1. The island needs to be in this category for four weeks before moving to Tier 2.

“What we do as an island determines whether we go forward or backward,” Caldwell says. “We all have a part in this.”

According to the metrics for Tier 1, Oʻahu retailers—including big-box retailers like Costco and Walmart—are allowed to open at 50% capacity. Restaurants can open at 50% capacity with restrictions: tables must be at least 5 feet apart, no more than five people per table and all must be from the same household and masks must be worn at all times unless eating or drinking. No liquor can be served, sold or consumed after 10 p.m. Bars and nightclubs remain closed.

Here’s more about what’s open and what’s closed in the four tiers: 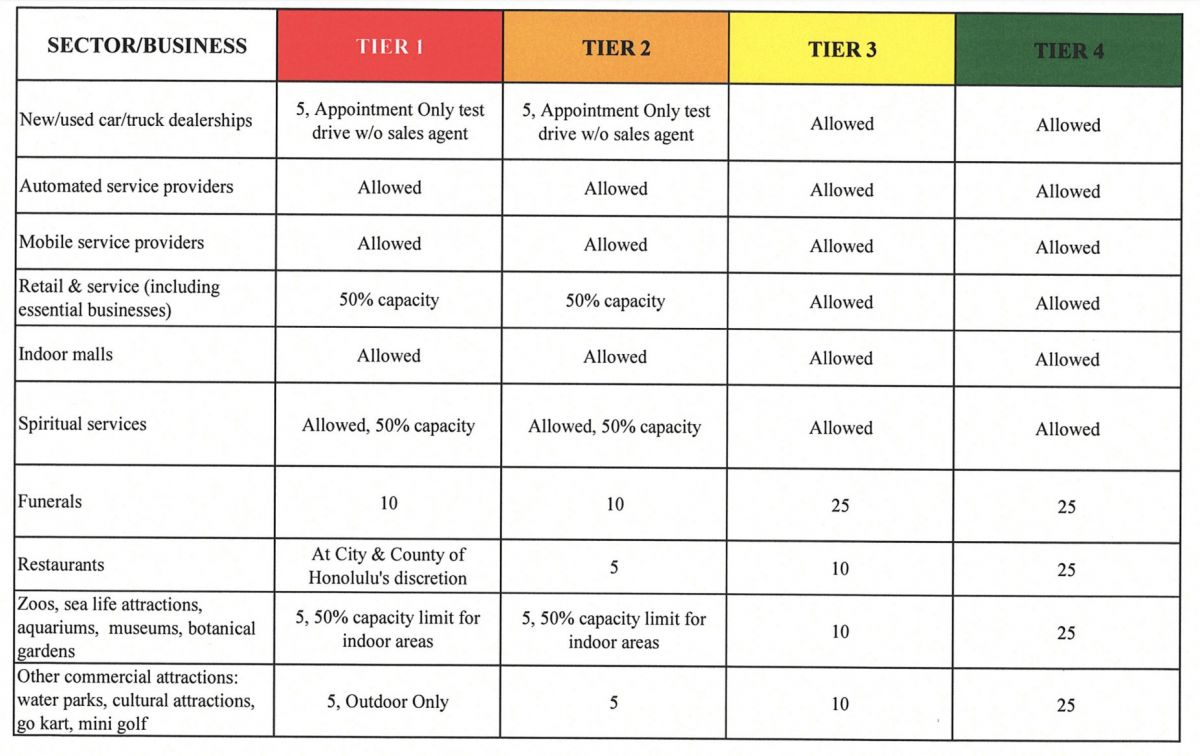 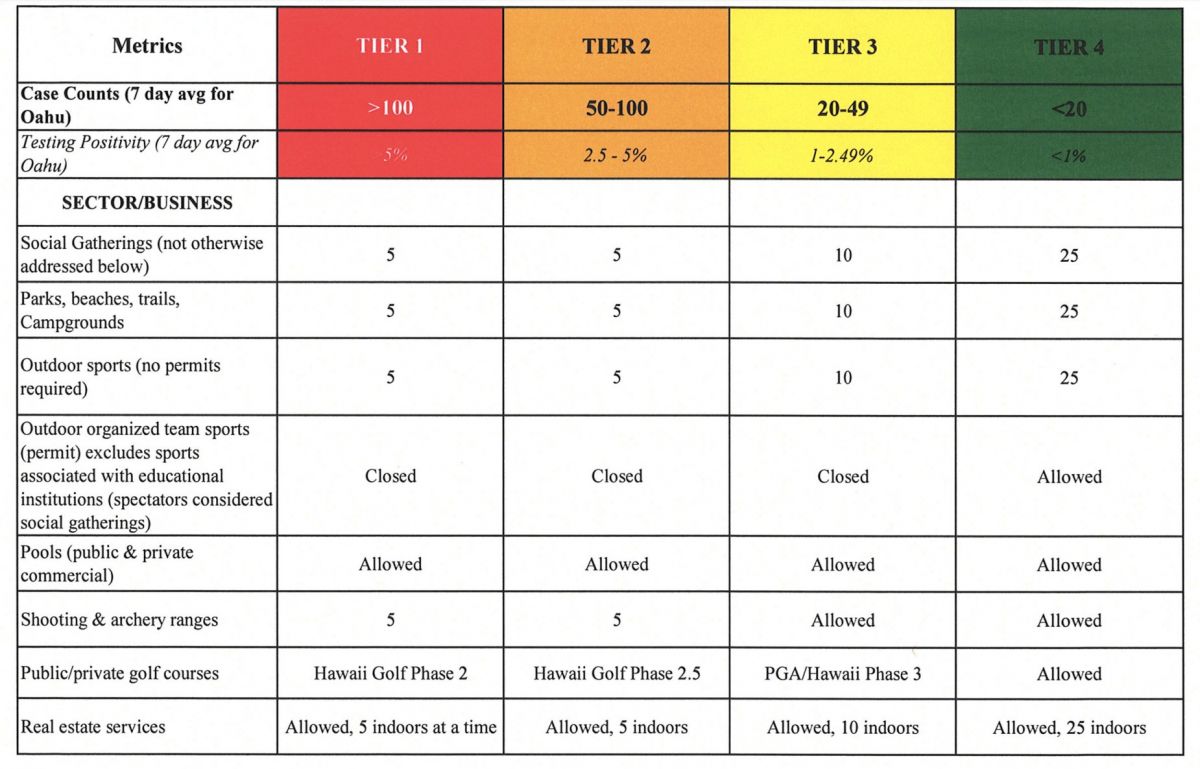 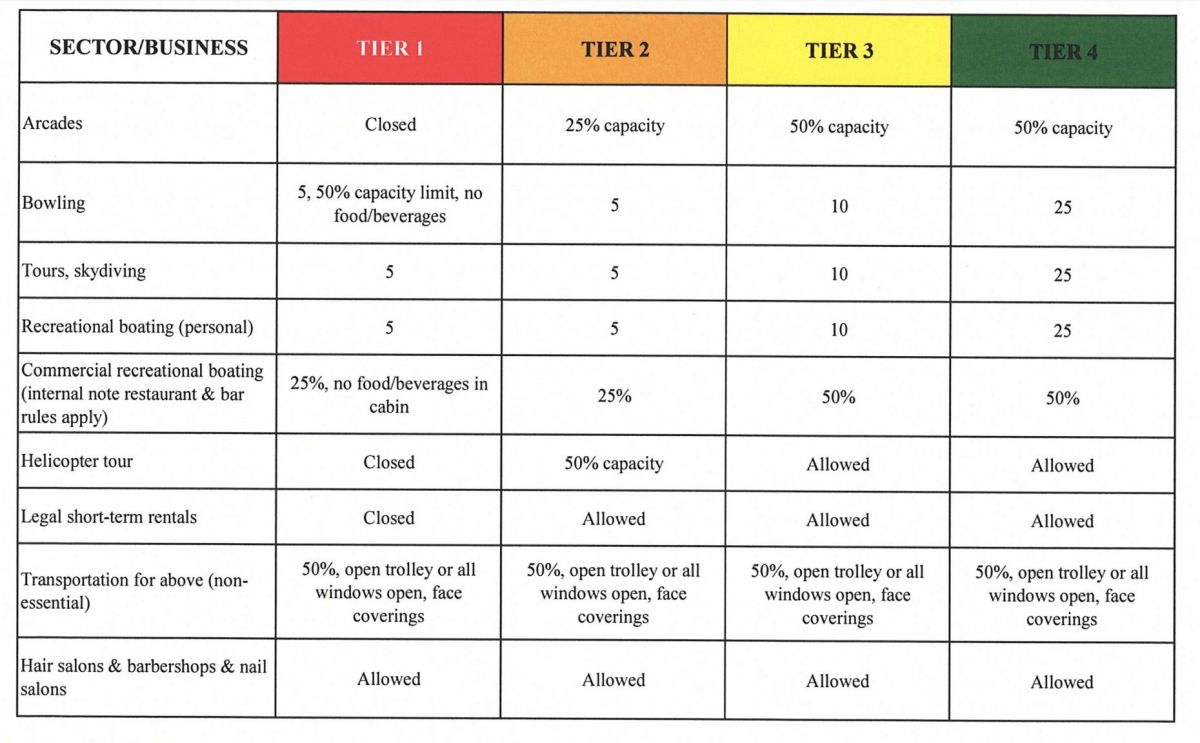 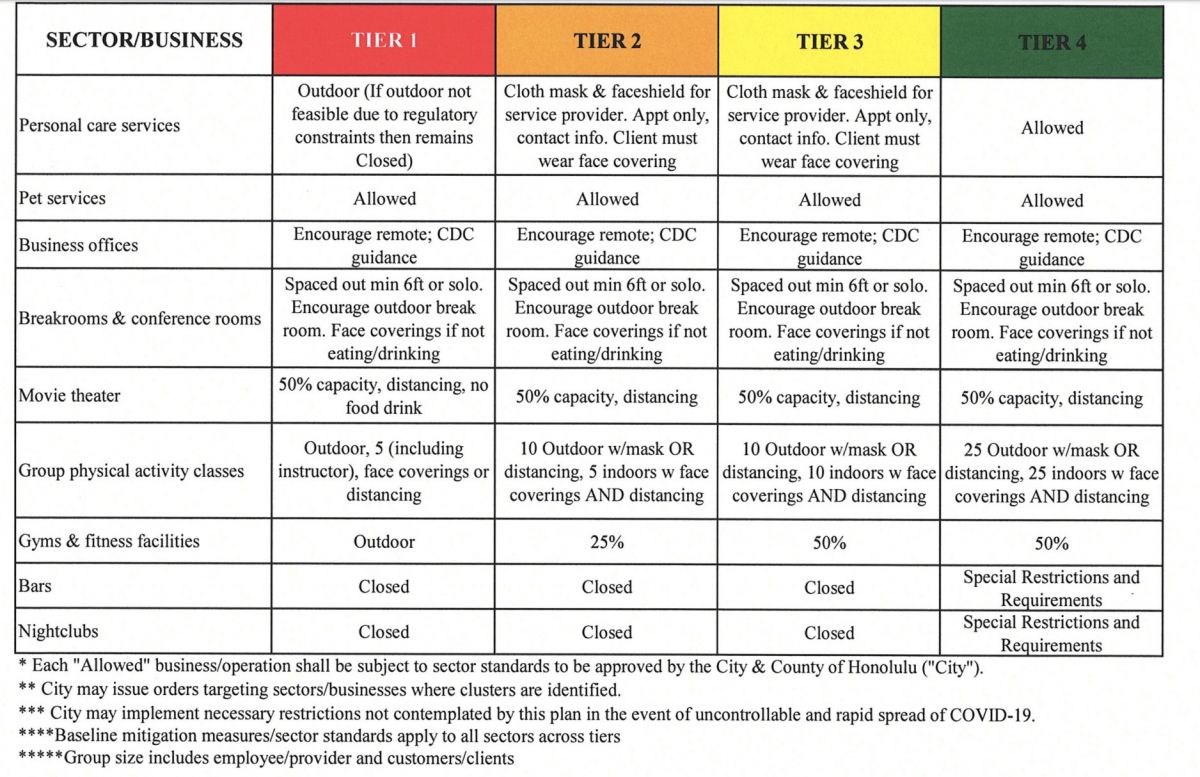 Plans to start a pre-arrival testing program for trans-Pacific travelers to Hawaiʻi is still slated for Oct. 15, according to Caldwell. That means visitors with a negative COVID-19 test taken within 72 hours of travel can forego the state’s mandatory 14-day quarantine.

Caldwell says the vaccine may not be coming until next year, so “we need to live with this virus.”