The fate of the 3,922-step Haʻikū Stairs has been long debated.

Haʻikū Stairs, aka Stairway to Heaven, is one of the most Instagrammed trails on Oʻahu—even though it’s been closed (read: off-limits) since 1987. (Though you’d never know that from social media!)

So Honolulu officials decided it was enough.

Yesterday Honolulu Mayor Rick Blangiardi said he plans to move forward with removing the controversial stairs, which have been breached by trespassing hikers—and upsetting residents in the area—for decades.

“We recognize the interest the stairs have to certain community groups, however issues such as trespassing, personal injuries, invasive species and overall safety of the public cannot be ignored,” Blangiardi said in a release. “Fundamentally, it is inappropriate to have a high-use tourist attraction entering through this residential neighborhood, which lacks in the capacity to provide appropriate facilities or parking. In addition, there is no unrestricted access to the stairs and the primary landowner at the base made it clear it is not interested in providing access.”

Blangiardi’s team will work on developing a detailed plan and timeline for getting rid of the stairs. 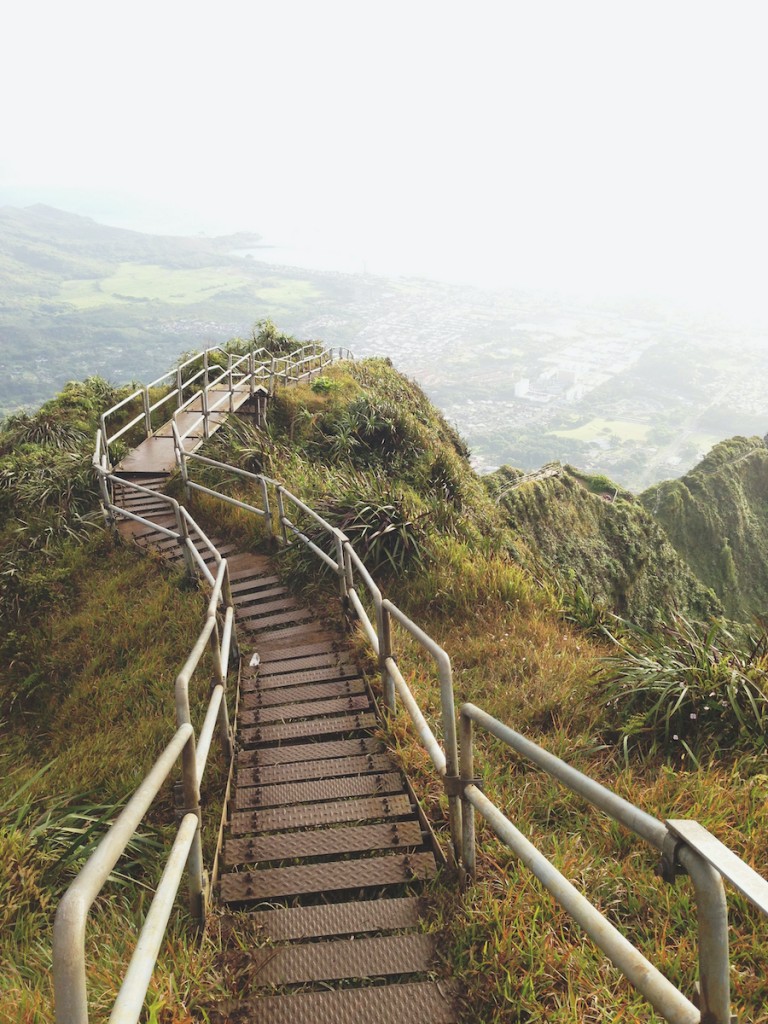 Haiʻkū Stairs has a long and somewhat complicated history.

The stairs were built by the Navy in the beginning of World War II to house a top-secret military radio station. After the war, the Coast Guard took ownership of the stairs, allowing people to access the hike to the top of the Koʻolau Mountains. Word spread about the unparalleled views from the top, luring more hikers. Vandalism, littering and trespassing on surrounding private properties led to the Coast Guard closing the stairs, which has become dilapidated over time and use, in 1987. That was the last time the stairs were ever legal to climb.

In 2002, the city spent $875,000 to repair the stairs and railings with plans to open the trail to the public. But that never happened, due to complaints from the neighborhood—hikers trespassing on their property, blocking driveways, waking residents—and liability concerns.

In 2017 the Honolulu Board of Water Supply, which owns and manages the land under and surrounding Ha‘ikū Stairs, asked for public comment to help draft an environmental impact statement that proposed removing the stairs entirely. According to the board, it cost more than $200,000 a year to pay for 24-hour security to keep hikers from accessing the stairs. The process to remove the stairs would take five to six years and the study will determine the cost to demolish them.

Among the more than 700 responses the agency received was a proposal by the Friends of Haiʻkū Stairs to keep the stairs open and allow controlled access to the trail.

In 2020 the Board of Water Supply transferred ownership of the stairs and the surrounding 200 acres to the city last year. It’s now managed by the city’s Department of Parks and Recreation, which funds police enforcement of the rules that hikers continue to ignore. Officers have given out hundreds of citations and warnings—and made dozens of arrests—over the years. (Fines are $1,000.)

The stairs have become an Instagram destination on Oʻahu, with hikers posing perilously at the summit. For awhile there was a makeshift swing set up at the top; that has since been removed.

And soon the stairs will be, too.