Wrapping up the ‘aughts, the 00’s, or whatever you’ve preferred calling the first decade of the millennium here in Hawaii?

Big fans that we are of warm, tradewind-kissed New Year’s Eves, you can count us in, too.

As always, Hawaii will be one of the final locales in the world to say “Aloha!” to the year gone by and “Aloha!” to the new year ahead. But that doesn’t mean we prefer our New Year’s Eves quiet.

Here in Hawaii, many residents follow a  longtime New Year’s Eve tradition of welcoming the new year with fireworks in their driveways and neighborhood streets. It’s loud. It’s smoky. It requires a permit. It’s also a surprising and visually stunning sight for visitors checking out our ‘burbs.

But if you—like a certain leader of the free world with the last name Obama—are fortunate enough to be welcoming 2010 in the Islands this year, we’re thinking you might instead wish to opt for the sights and sounds of some public displays of pyro (i.e. New Year’s Eve aerial fireworks displays).

Lucky for you we love our grand New Year’s Eve fireworks shows here, too.

Below you’ll find our list of Hawaii spots to catch the sky ablaze with New Year’s Eve fireworks displays. We’ve got all the lowdown you need to know about public fireworks shows on Oahu, the Big Island of Hawaii, Maui, Kauai and even Lanai.

Where: Waikiki beachfront
$$$? Free, open to public.
The details: Visible from the entire Waikiki beachfront, this annual fireworks show—sponsored by Waikiki hotels and businesses and the Waikiki Improvement Association—even has a fireworks countdown before the main event.

Where: Downtown Honolulu, (808) 566-2337
$$$? Free, open to public.
The details: Fireworks are shot from platforms docked in Honolulu Harbor so the best spots to watch are along the Marketplace’s long pier. Dining specials and entertainment will be offered all Eve at many Marketplace restaurants. 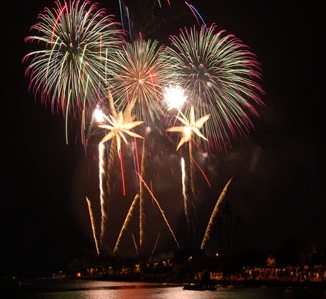 Where: 3850 Wailea Alanui Drive, (808) 875-1234
$$$? Free, open to public viewing from Wailea Beach Park.
The details: The best spots for the resort’s annual fireworks are along Wailea Beach Park. If you’re staying in Wailea, just take the Wailea Coastal Walk to Wailea Beach.

Where: Poipu Beach on Kauai’s south shore
$$$? Free, open to the public.
The details: The best views are at the Sheraton Kauai Resort and Poipu Beach Park, but you can catch the aerial display from many of the Poipu area resorts and condos.

Where: Hulopoe Beach, (808) 565-2000
$$$? Free, open to public viewing from Hulopoe Beach
The details: There are terrific views of the fireworks from the Four Seasons Manele Bay property and from the sands of Hulopoe Beach.