There’s no better place to bid aloha to 2010 than in Hawaii, with fireworks over the Pacific Ocean.

Imagine balmy weather on New Year’s Eve, lounging in slippers on a stretch of sandy beach, maybe a tropical cocktail in hand. No snow to plow, no heavy coats to wear, no chance of hail in the foreseeable future.

Sure, the pyrotechnic shows in the Islands may not be of the same magnitude as those in New York City or in Washington D.C. But even the President of the United States has ditched his Mainland digs to spend the holiday in Hawaii — and maybe, just maybe, will be catching one of these free fireworks shows. You never know.

Where: Waikiki beachfront
$$$? Free, open to public.
The details: This annual fireworks show — sponsored by Waikiki hotels and businesses and the Waikiki Improvement Association — is visible from the entire Waikiki beachfront — and beyond. The popular event even has a fireworks countdown before the show.

Where: Downtown Honolulu, (808) 566-2337
$$$? Free, open to public.
The details: Fireworks are shot from platforms docked in Honolulu Harbor so the best spots to watch are along the Marketplace’s long pier. Dining specials and entertainment will be offered all night at many Marketplace restaurants.

Where: Hualalai Resort, 72-100 Kaupulehu Drive, Kailua-Kona (off Queen Kaahumanu Highway), (808) 325-8000
$$$? No, but the hotel events are only open to guests of Hualalai Resort area hotels.
The details: Fireworks are shot from the Four Seasons beachfront so guests will have the best views. But the show is also visible from Queen Kaahumanu Highway.

Where: 3850 Wailea Alanui Drive, (808) 875-1234
$$$? Free, open to public viewing from Wailea Beach Park.
The details: The best spots for the resort’s annual fireworks are along Wailea Beach Park. If you’re staying in Wailea, just take the Wailea Coastal Walk to Wailea Beach. 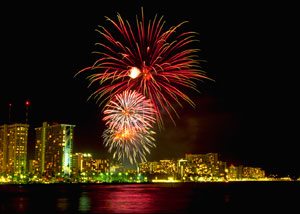 Where: Poipu Beach Beach Park on Kauai’s south shore
$$$? Free, open to the public.
The details: The best views are at the Sheraton Kauai Resort and Poipu Beach Park, but you can catch the aerial display from many of the Poipu area resorts, condos and beaches.

Where: Hulopoe Beach, (808) 565-2000
$$$? Free, open to public viewing from Hulopoe Beach
The details: There are awesome views of the fireworks from the Four Seasons Manele Bay property and from the sands of Hulopoe Beach.