We’re not talking about the sounds of the rolling waves. Rather a series of shows that, since June, has featured some of the state’s most celebrated contemporary Hawaiian music acts.

Legendary ukulele virtuoso Eddie Kamae will play on July 24, and Grammy-nominated guitar master Willie K will highlight the series’ final show on August 7. Kaukahi, Hapa, and Jay Larrin and Jerry Santos have all performed so far this summer.

Kamae is a multi-tasking living treasure of Hawaiian music. He gained fame with such groups as the Ukulele Rascals and Ray Kinney’s Orchestra before he founded the pioneering Hawaiian band, Sons of Hawaii, with Gabby Pahinui. Kamae is also an author and award-winning filmmaker.

Meanwhile, the eclectic Willie K draws from a number of influences including Hawaiian, jazz and R&B to create a unique guitar-driven sound that matches his blistering talent. 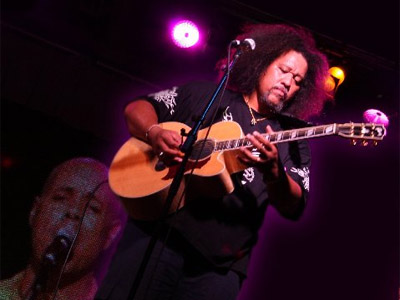 The concerts are held on the back lawn of the Waikiki Aquarium, right next to the sands of Waikiki Beach. The lawn is relatively small, offering a more intimate experience than your standard concert venue. Your ticket also allows you to see the aquarium’s exhibits after dark—trust us, a very cool thing.

Along with great music and fascinating exhibits, there’s food for sale from a number of local restaurants—including Hula Grill, Yama’s Fish Market, and Big City Diner.

Come early for the best spots on the lawn. If you decide to bring a chair, make sure it’s a low-lying beach chair as not to obstruct anyone’s view.

Don’t feel like shelling out the dough? You are always welcome to sit on neighboring Waikiki Beach. You won’t see the show. But the music will wash over you from a distance.