Dancer and choreographer, Christopher Morgan, is touring the Islands with his dance theater piece, “Pohaku,” which pairs hula kahiko (traditional hula) and modern dance styles together. It’s a solo dance performance, but he shares the stage with his kumu hula (hula teacher) Elsie Kaleihulukea Ryder of Halau Hula o Kukunaokala and electric cellist Wytold, who have also created a unique musical score of classical music with Hawaiian chanting and percussion. The blending of Hawaiian hula with Western styles of dance isn’t a common occurence, but it represents the internal conflict that Morgan feels as a mixed race person who was born in California to parents who were born and raised in Hawaii.

What is the story of “Pohaku”?
I always felt this interesting pull back to Hawaii, going back to the Islands to visit grandparents, aunties and uncles and sort of feeling like that was our main cultural identity growing up. So then, as I found Western dance forms and that became my life’s work; I became curious about connecting them. I remember being a kid and wondering why on earth would my parents want to leave this paradise and move to the continent. That just seemed so strange. But then as I grew older and I looked at what was happening in the 1950s—early 1950 when they left—and then tracing that back to the overthrow of the kingdom, that became the foundation of this story—how the political ramifications of colonization and the overthrow precipitated an outward migration, including my parents, and so that left this dispersal of the people. And I’m part of that. So it’s about that tension, sort of looking at those personal stories and then the larger story. 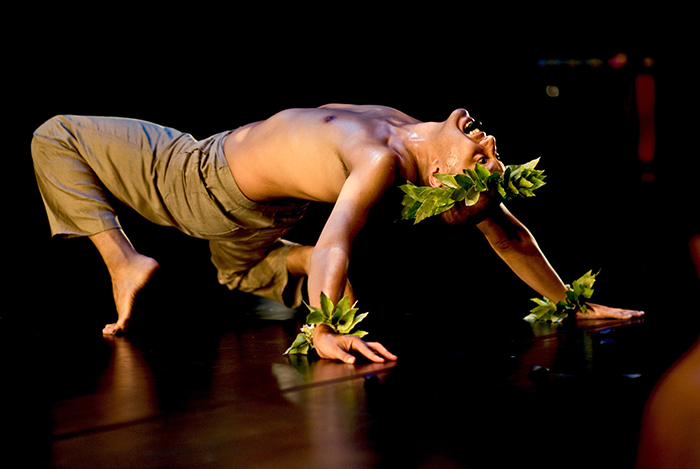 How did the idea first come about to create “Pohaku”?
I was living in New York City at the time, and at a part of my career where I was starting to dance less and make dances a bit more. And I started noticing these trends in what I was making that felt like, in one way or another, they were connected to hula. I wanted to learn more about that, because when I was a little kid I was so young when I was dancing hula, so I never had a good intellectual grasp of it. It was a lot of mimicry you know, like, my sisters would show me a step and then I would do the step and I didn’t understand necessarily how or why or where it came from. So I wanted to get deeper into that and I had a conversation with my mom, about 12 years ago, and she said, you should study with your cousin John. His work is connected to Molokai and that’s where my grandmother lived, so that felt very kind of pono, right, an an honest way to go about that. So I reached out to my cousin John and we started these conversations. I was awarded a grant from a foundation to take the summer off and just go study with him. And we found out about that award letter two weeks before he passed away in 2006.

I waited awhile and it took about three years for us to reorganize, and then I ended up going and studying with some of his haumana (students) who were continuing his work and running the halau (school). And from there, I left with this feeling of a responsibility, or kuleana, somehow, because I had an opportunity to share a bit about the Hawaiian story that maybe my modern dance audiences really didn’t know anything about.

Why is it so unusual to see the pairing of kahiko hula with a Western form of dance?
I would make two guesses. One is, I, myself was very trepidatious about doing this. This was many years in the making. And my trepidation came from seeing other fusion forms not feeling quite fulfilled, or that they weren’t doing proper respect to the two forms that they were coming from. So for me, that was my hesitation or why this work took so long to come together. And then as the performer in it, I’ll say, for me the hardest thing is switching [between the two dance forms], especially the Molokai style of kahiko hula that is from the tradition I’m drawing upon. There are things about the stamping, the kui, that are very very specific. There’s ways of moving the arms that are very specific and very different in how I move my arms in modern dance and the style I’ve been cultivating for over 20 years, so I think the physical switching is really hard. I would by no means say I’ve mastered it but that would be where the bulk of my work has been. The versatility required is challenging.

What do you want the audience to take away from the performance?
Through the specifics of my personal story and the story of the Hawaiian people, I’m actually trying to look at some big universal truths that we all share and try and bring together our commonality. Colonization has happened to communities all over the globe. Our sense of disenfranchisement, you know, I think that’s an entry point to the conversation about what’s happening with Native Hawaiians and their rights, or often their lack of rights. I think by having a very human face to this story and connecting it to the historical events that happened and precipitated to where we are now, I‘m hoping maybe some non-Hawaiians have a deeper understanding and a deeper empathy and I hope that Hawaiians see a bit of themselves reflected in it.