We explain what’s going on with the shield volcano on Hawaiʻi Island—and why you shouldn’t worry.

No one wants to hear the words “active volcano” and “advisory level” in the same sentence—especially if you’re planning a trip to Hawaiʻi Island, where two of the world’s most active volcanoes are located.

But don’t worry—the threat of an eruption from Mauna Loa, the world’s largest active volcano, isn’t expected, according to the Hawaiʻi County Civil Defense Agency, despite an increase in seismic activity since September. On Nov. 15 a swarm of at least 50 small-magnitude earthquakes—below 3.0 magnitude—rattled Mauna Loa, reported the U.S. Geological Survey, but geologists say there are “no signs of an imminent eruption.”

So what’s causing these mini-earthquakes? According to the USGS, the activity is likely being driven by new magma entering between 2 and 5 miles below the volcano’s summit.

If you’re planning a trip to Hawaiʻi Island and concerned about Mauna Loa, don’t be.

Even if there was an eruption at Mauna Loa, Hawaiʻi eruptions are non-explosive with gusher-like lava fountains that generate lava rivers of very fluid basaltic lava. Shield volcanoes don’t explode the way a stratovolcano—like Mount St. Helens in Washington State or Mount Fuji in Japan—would. 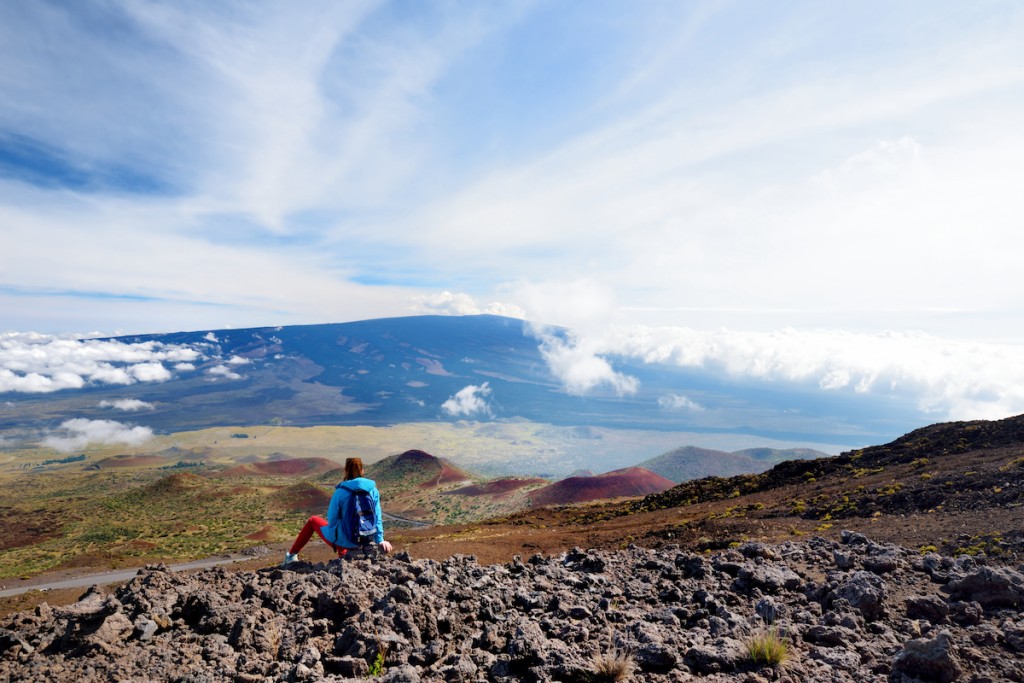 A hiker admiring the view of Mauna Loa in the distance on Hawaiʻi Island.
Photo: Getty Images

It’s a huge island—with an area of 4,028 square miles, it’s nearly twice as big as all of the other Hawaiian Islands combined. In fact, Hawaiʻi Island is the third largest island in Polynesia, behind the two main islands of New Zealand. See? Big!

So when there’s volcanic activity at one of the island’s volcanoes, it doesn’t mean the entire island—or folks like me living in Honolulu on Oʻahu—are in danger.

Currently, Kīlauea is erupting, with an active lava lake in Halemaʻumaʻu Crater that you can safely see when you visit Hawaiʻi Volcanoes National Park. And because of the heightened unrest and increased numbers of earthquakes near the summit of Mauna Loa, the park has closed the remote summit and high-elevation areas on the volcano. But, as spokesperson Ben Hayes, reaffirms, “Mauna Loa is NOT erupting.”

Mauna Loa is the largest active volcano on the planet. Its name means “long mountain” in the Hawaiian language—perfect since the subaerial part of the volcano extends for about 74 miles from the caldera to the coastline near Hilo. It covers half of the Island of Hawaiʻi and, when measured from its base at the bottom of the sea, is taller (30,000 feet) than Mount Everest.

It’s also among the world’s most active volcanoes, having erupting 33 times since its first well-documented historical eruption in 1843. The last time Mauna Loa eruptive was in 1984, when a lava flow came within 4.5 miles of Hilo.

Don’t cancel your travel plans to Hawaiʻi Island, but do check the USGS and Hawaiʻi Volcanoes National Park for updates.