Eruptive activity at the Big Island’s Kilauea volcano is picking up at the Pu u Oo vent and Halemaumau Crater.

At the Pu u Oo vent, situated in the volcano’s East Rift Zone, lava flows are sporadically spilling onto the east flank of the vent. The volume of lava streaming to ocean entry is increasing slightly, with small entry points now spread along the coastline near Kupapu Point (pictured, above), on both sides of Hawaii Volcanoes National Park. The current ocean-entry flow has been under way since mid-November.

This month marks the 30th anniversary of Kilauea volcano’s ongoing East Rift Zone eruption. During its first three years, spectacular lava fountains spewed from the Pu u Oo vent. Since then, nearly continuous flow has built a vast plain of slow-moving pahoehoe lava (pictured, below) stretching from the volcano’s rift zone to the Big Island’s shoreline. 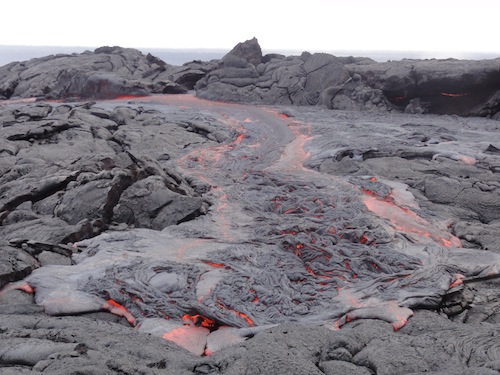 Also, in recent months, at Kilauea volcano’s summit caldera, the lava lake swirling in Halemaumau Crater has been rising to record levels. Since March 19, 2008, when an explosive eruption formed the lava lake, its surface level has remained mostly below the inner ledge (about 100 feet below the floor of Halemaumau Crater). It has, however, risen above and flooded the ledge in October 2012 and this month. According to Hawaiian Volcano Observatory scientists, “the lake level responds to summit tilt changes, with the lake receding during deflation and rising during inflation.”

The best and closest place within Hawaii Volcanoes National Park to catch a look at eruptive activity at Halemaumau is at the Jaggar Museum, which is near the summit. After sunset, the lava lake casts a vivid glow on the ever-present plume of volcanic gases rising from the site. 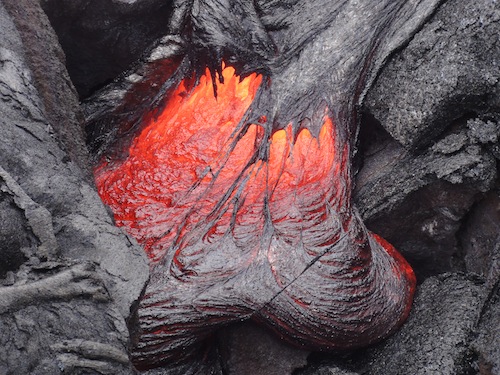 On-island viewing of the ocean-entry lava flow is now largely limited to the Kalapana viewing area, which is maintained by Hawaii County and located outside of the national park. Click here for more information about the viewing area.