Situated at the foot of the majestic Koolau Range, this garden is a treasure trove of flora from the world’s tropics.

Each of my past several visits to Hoomaluhia Botanical Garden began at sunrise. Greeted by a few wild chickens strutting near the park’s still-locked, gated entry, my running buddies and I would lace up our footwear and survey the skies above Windward Oahu and the lushly verdant hills before us. Then, rain or shine, we would run.

I loved scrambling up and down the park’s winding road, perennially dotted with showering blooms from rainforest trees and plant species native to Hawai‘i and other far flung tropic locales from Polynesia and Melanesia to Malaysia, Africa, Sri Lanka and India. On these runs, I typically gave more attention to my pace and snippets of conversation among my friends, than admiring the park’s profusion of nature.

Today will be different.

As I sign in for a guided nature hike at Hoomaluhia’s visitor center, talk in my group of a half-dozen visitors is already focused on Oahu’s windward side geology and the Kaneohe-area park’s origins at the foot of the majestic Koolau Mountain Range. All of this before our hike even begins on this wondrously clear morning. The good weather is welcome.

Cloudbursts are frequent at  the park, with annual rainfall counts tallying more than 100 inches. Interestingly, the yearly rainfall that keeps the park perpetually verdant was a large part of what motivated its genesis.

Following floods in 1965 and 1969 that devastated Kaneohe communities downstream of where Hoomaluhia now sits, the U.S. Army Corps of Engineers  was contracted to design and build a 2,200-foot earthen dam on area-traversing Kamoalii Stream. A planned added benefit of the massive, earth-moving flood-control project was a 400-acre park surrounding the completed dam’s reservoir. The aptly named garden park, Hoomaluhia, Hawaiian for “make a place of peace and tranquility,” opened in 1982. The 32-acre reservoir created by the dam was given the name, Loko Waimaluhia, or “lake of tranquil waters.”

As we begin our hike, our guide, Barbara Black, points to craggy vertical folds descending more than 3,000 feet from the peaks of the Koolau. On especially rainy days, she says, multiple waterfall ribbons suddenly appear within the folds, plunging over the eroding fragments of a once 10,000-foot shield volcano.

Leading us to a courtyard filled with plants tied to early Hawaiians’ everyday life, Black quotes an age-old saying, Ue ka lani, ola ka honua, or “The heavens weep, the earth lives.” Among the thriving flora we find here are snow-white hibiscus blooms, sweet-scented maile vines and mamaki shrubs, the leaves of which may be plucked for a refreshing tea. We also see loulu, the only palm tree native to the Islands, and kalo (taro). Inside the nearby visitor center, ethnobotanical exhibits explain how long-ago settlers used greenery to craft everything from clothing to medicine. 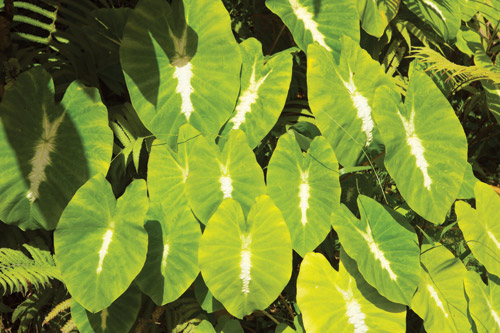 Before moving on to Hoomaluhia’s Hawaii and internationally procured tropical plant collection, Black unfolds a worn map and talks a bit about our Islands’ volcanic past. Awed by her explanations of mid-Pacific geological evolution and the fact that Maui’s Haleakala and the Big Island’s Mauna Kea and Mauna Loa volcanoes would eclipse Mount Everest in height if elevation measurement of the world’s mountains began at sea floor rather than sea level, no one in our group minds that Black’s all-but-shredded map is long overdue for at least a Scotch-tape patching.

Our fact-filled Hoomaluhia Garden two-hour nature hike is a freebie, courtesy of the City and County of Honolulu, which operates five Oahu botanical gardens. The hike is offered only on Saturdays, but the park is otherwise open daily, allowing runners, hikers and cyclists access to the breadth of its acreage. In addition to hikes and other programs aimed at elevating environmental awareness, camping and catch-and-release shoreline fishing (with bamboo poles and barbless hooks) in the reservoir lake are popular park activities.

My first-ever excursion into Hoomaluhia was an overnight camping trip with my son’s Cub Scout troop. Secretly dreading I would end up lugging camping gear deep into a forest of some sort, I was thrilled when, after driving nearly two miles into the park, I spotted a small parking lot, picnic tables and a no-frills, but tidy, restroom area near where we would later build campfires. During a nature hike, the Scouts made beelines to plants in the campground area fitted with markers noting species and places of origin.

Camping at Hoomaluhia is hardly a rugged wilderness experience—in a few areas, one can catch glimpses of traffic on a nearby freeway. Still, on some visits, there are moments when the only sounds I hear are chattering birds and tradewinds sweeping through leafy trees before being lifted up to the peaks of the Koolau. 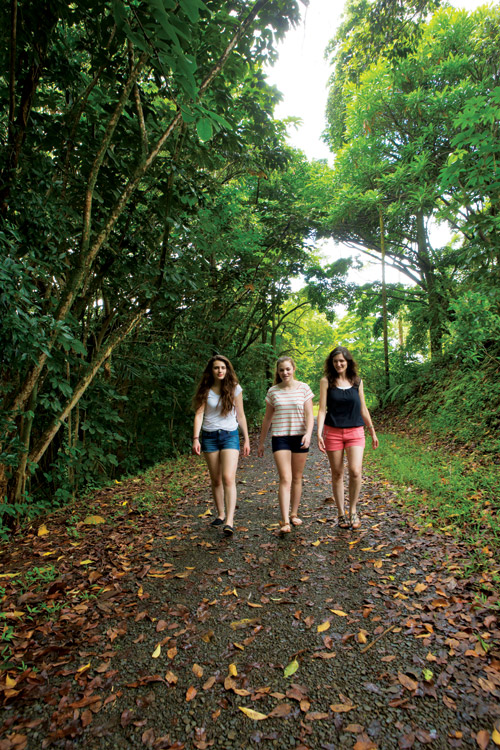 The park’s main road, bordered by rainforest trees and plants.

In these quiet times, it’s easy to feel truly immersed in nature and far from urbanity. I feel it while running along the park’s road before the entry gate opens to cars. I feel it during today’s guided nature hike when we stop under tucked-away cinnamon and nutmeg trees to snap twigs and pods and bring them to our noses, savoring the scent of spices.

The moment reminds me of the morning I woke up at my son’s Scout camp out years ago. It had rained overnight in Hoomaluhia while we slept in our tents. As I stepped outside and gazed at the emerald Koolau before us, I witnessed clearing sunrise skies and a newly formed waterfall plunging down a mountain crevice—a breathtaking sight. It’s all still there.

More than three decades after human hands and the din of earthmovers shaped Hoomaluhia Garden, it continues to bloom as a place of peace and tranquility.

These Gourmet Caramel Apples are a Must-Try on Maui