Burrell, (pictured, right) host of Secrets of a Restaurant Chef and co-host of Worst Cooks in America, will be featured at the two-day festival’s Grand Tasting and Fashion Show, which will get under way at 6 p.m., Fri., May 20, at the Ko Olina Beach Club at Ko Olina Resort — about a 40 minute drive from Waikiki.

Burrell shares chef tips with the home-cooking crowd in Secrets Of a Restaurant Chef, which debuted June, 2008. Last year, Burrell and chef Beau MacMillan launched Worst Cooks in America, a reality show in which contestants undergo a culinary bootcamp. In the show’s second season, which got under way in January, MacMillan was replaced by chef Robert Irvine. Burrell has also appeared on Iron Chef America, serving as a sous chef for competitor Mario Batali. 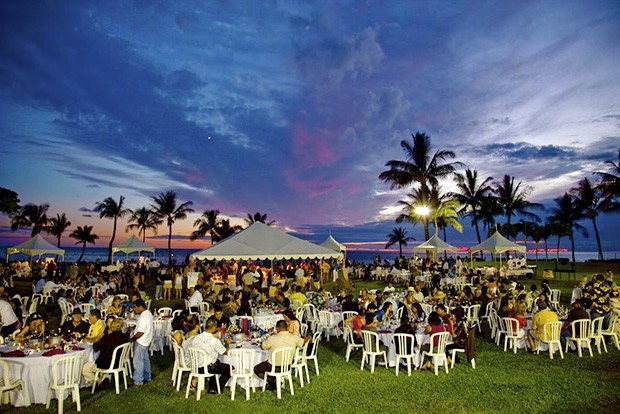 A food and wine pairing event, set for noon on Sat., May 21, at Ko Olina’s Ihilani Resort & Spa, will spotlight a friendly competition in which diners sample pairing picks submitted by a panel of chef competitors and cast votes for the best pairings.

The lineup of competing chefs includes: Jason Kina of the Ihilani Resort & Spa, Matt Zubrod of Monettes, George Gomes of the Mauna Kea Beach Hotel and Fred De Angelo of Ola. Each will present dishes along with their choice of wines from wineries participating in the festival.

The festival will wrap up with a beachside barbecue and fashion show, happening 6 p.m., Sat., May 21, at Paradise Cove at Ko Olina.