His battered t-shirt slashed with grease, Kelii Kotubetey is cleaning chainsaws after lunch.

The work is tedious, but the view from his office—a worktable near the shore of a glassy, centuries-old Hawaiian fishpond at the base of the majestic Koolau mountains—more than makes up for it. Kotubetey is one of the founders of Paepae o Heeia, a private nonprofit that manages and cares for historic Heeia Fishpond, a kuapa (walled fishpond) corralling 88 acres of brackish water on Oahu’s windward coast.

Heeia’s wall, about 1.3 miles in length, is one of the longest for a fishpond in Hawaii. And since efforts to restore the fishpond began in the late 1990s—much of it the handiwork of college students with handsaws and gloves—Heeia’s wall is now visible from shore, stretching out into Kaneohe Bay. In February, the final pohaku (stones) were laid at a corner of the fishpond wall near the mouth of Heeia Stream, the pond’s freshwater source.

“That was really a milestone in the restoration and refurbishment of the kuapa,” Kotubetey says, gazing out over the fishpond, light winds smoothing out the bay. “It’s pretty amazing.”

What’s really amazing, though, is what Paepae o Heeia (the name means “support of Heeia”) has accomplished in 13 years.  Since its founding in 2001 to malama (care for) the fishpond, Paepae o Heeia’s staff, and thousands of volunteers, have removed thick, red shoreline mangrove from more than 3,000 feet of the 7,000-foot-long kuapa. Initially planted here in 1922 to control erosion and stabilize sediment, the plant quickly invaded all parts of the fishpond, its roots hastening silt buildup and compromising the wall’s structural integrity.

With community assistance, Paepae has also removed 50 tons of invasive limu (seaweed) from within the fishpond since 2004, giving much of it to the caretakers of a nearby loi (irrigated terrace) for use as a fertilizer for its kalo (taro) and uala (sweet potato) patches. At the same time, the nonprofit has dedicated much labor to restoring Heeia Fishpond’s wall, dry-stacking volcanic rock and coral carried to worksites along the wall by hand.

Heeia’s wall is actually made up of two parallel volcanic rock walls with an eight-foot area between each filled with mostly coral and some rock and dirt. The materials used allow the pond to maintain a base water level and forces more water toward its six makaha (sluice gates). Three makaha along the fishpond’s seaward edge regulate ocean water input while three along Heeia Stream regulate freshwater input.

As many as three-fourths of the volunteers who have helped Paepae o Heeia with fishpond restoration efforts over the years have contributed in some way to rebuilding Heeia’s wall.

“That’s a lot of years and a lot of hands,” Kotubetey says. 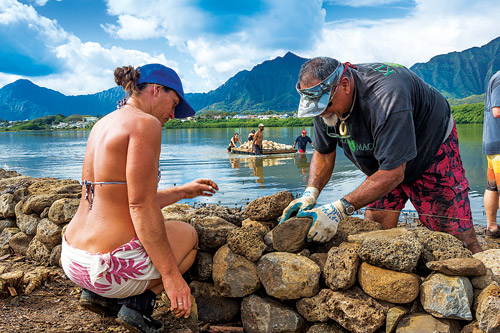 Loko ia, or Hawaiian fishponds, have existed in the Islands for hundreds of years. An estimated 350 were in operation when Capt. James Cook arrived in Hawaii in 1778. Area residents likely constructed Heeia (Hawaiian for “washed away”) between 600 and 800 years ago. Other cultures had developed techniques for herding or trapping adult fish from the open ocean in shallow tidal areas before Hawaiians did. However, the six types of fishponds developed by Hawaiians—including large, kuapa-style ponds like Heeia—are found nowhere else in the world.

Today, the remains of many Hawaiian fishponds are either in need of major repair or, in some cases, are completely beyond repair. A few, however, like Heeia, are being returned to form and productivity.

Three different styles of loko ia are being restored at the Kaloko-Honokohau National Historic Park on the Big Island. On Maui, the nonprofit Maui Fishpond Association has been dilligently restoring Koieie Fishpond in Kihei since 1998. Earlier this year, Kualoa Ranch, landowner of Molii Fishpond, the largest and oldest continually managed fishpond in the state, received approval to sell oysters farmed inside its nutrient-rich waters.

The common denominator at all of these sites? Community hands working to restore and preserve them.

Says Paepae o Heeia executive director Hiilei Kawelo, “As a community, we need to preserve and protect these places of traditional agriculture and aquaculture because of their application and use today.”
On a bright Saturday afternoon visit to Heeia , I found the fishpond wall populated with couples armed with bamboo fishing poles and beach chairs, fathers showing sons how to cast for papio (young trevally) and tilapia, and families toting coolers loaded with food and drink.

The occasion was one of four La Holoholo family fishing days scheduled at the fishpond last year. On these days, Paepae opens fishing at Heeia to the public to help rid the fishpond of invasive, predatory fish such as toau (black-tailed snapper) and kaku (barracuda). Paepae plans to host La Holoholo Days again this year, though dates have not been finalized.

The nonprofit also offers hour-long guided walking tours of the fishpond, half-day field trips and opportunities for volunteers to assist in restoration work. The activities allow the public an opportunity to visit the historic site and learn about the importance of fishponds to Hawaiian culture—the latter, a critical part of Paepae o Heeia’s mission.

Last summer, the nonprofit was awarded a two-year, $93,000 grant from the Office of Hawaiian Affairs to preserve and maintain the traditions and practices of the Heeia landscape, including the fishpond.

Paepae is putting those grant monies to work this year, offering public hands-on workshops covering a range of topics from Hawaiian house-building and the making of traditional fishnets to evening talk-story sessions at the pond with Hawaiian kupuna (elders) and other experts.

“Visitors will learn about the fishpond’s history and the current restoration initiatives of Paepae o Heeia,” Kawelo says. “But, more important, they will walk away with a greater appreciation for the real Hawaii, its people, and our unique culture and spirit.”

The nonprofit has long understood and valued the power of community. The restoration of the fishpond is visible proof of what can be accomplished with the hard work and determination of just a few.

“The work never ends. And no matter,” Kotubetey says, wiping his brow and gazing again at the fruit of years of Heeia labor spread out before him. “We’ll keep plugging along and chugging along, involving the community every step of the way.”