With all due respect to my colleague Sherie Char, she not’s the only one who loves to fill up her plate now and again.

So with summer winding down, I had to stop by Honolulu’s high-end hot dog stand.

Hank’s Haute Dogs is the brainchild of restaurateur Henry Adaniya, the man behind posh eateries like Chicago’s Trio. Hank’s is a considerable departure from such places—laid-back, informal and very appropriate to the shorts and rubber-slipper crowd.

Now you may wonder: of all the things to eat in Hawaii, why hot dogs? Because at Hank’s they give a unique twist to the comfort staple: blending eastern and western flavors and using fresh, locally-grown ingredients.

And their dogs are good, so good that they’ve often closed early due to high demand.

On the menu you find the standards:  Polish and Italian sausages, bratwurst, chorizo, even a Portuguese sausage dog, treasured by locals for its garlicky goodness. What caught my eye, however, were their daily specials—rabbit, duck, even lobster.

The special of the day was a Kobe beef hot dog. Kobe beef is the stuff of legend: a special breed of Japanese cattle are fed the finest grains and brushed and massaged daily. The result is a cut of beef so perfectly marbled with fat it melts in your mouth, literally. 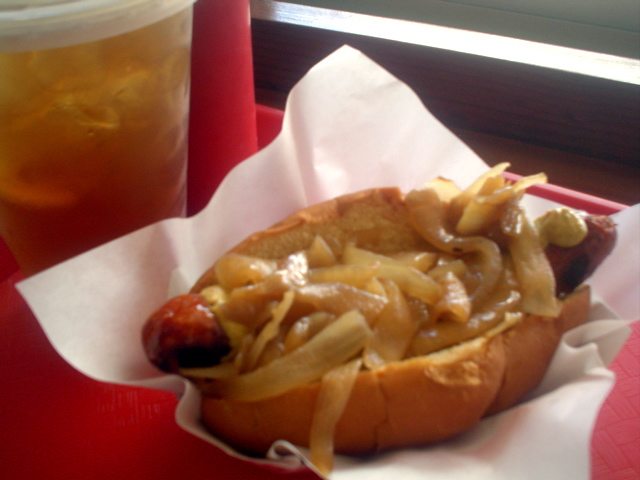 As promising as this sounded, all ground up I couldn’t distinguish that my dog was made of the prized beef. It was still a solid sausage (photo, right), but a bit of a letdown since I could have got a fat brat for much less and had some change leftover for an order of Hank’s famous double-fried French fries. (Luckily, my companion happened to get some for herself. I snuck a few. They are good.)

The slaw that topped the Kobe dog was a revelation, made with thin strips of daikon and carrot, coated in sesame oil. It provided a nice crunch and smoky compliment to the meat.