Hawaii celebrates its 50th anniversary of statehood on Friday—quietly.

There are events on all the major islands, but celebrations are muted. (If you’re interested in finding the events, click here for a full schedule.)

Why muted? You need to understand the long campaign from 1903 to 1959 for Hawai‘i statehood—and its implications today. Here’s a look at the events that transpired—as chronicled in HAWAII Magazine’s feature story on the rocky road to statehood.

If after you read it, you have any comments, observations or memories, feel free to add them in the comments field, or on our Facebook or Twitter sites. We look forward to hearing your views on Hawaii’s 50th anniversary of statehood.

Hawaii’s road to statehood was long, winding and not without controversy.

The excitement was understandable. Statehood hadn’t happened overnight. It took more than six decades of campaigning, petitioning and politicking before Hawaii received its star on the U.S. flag. 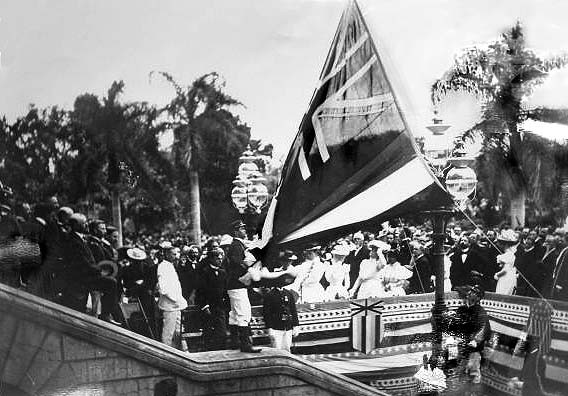 The push for statehood began in the early 20th century. Hawaii was a much different place then. Only 154,000 people called the Islands home—one-tenth of today’s population. The pineapple and sugar industries drove the economy.

Hawaii governor, Sanford Dole, signed a joint resolution proposing the topic of statehood to Congress for the first time in 1903. Hawaii had been annexed as a United States territory just five years prior on July 7, 1898; Iolani Palace’s Kingdom of Hawaii flag lowered a month later (photo, bottom).

The prospect of statehood raised numerous concerns. Critics cited the young territory’s undeveloped infrastructure and isolated location, while some opponents worried a new state would disrupt the balance of Congress.