The native plants and wildlife of Hawaii’s rainforests will soon be found on letters and packages circling the globe. That is, at least on the U.S. postage stamped on that mail.

In September, the newest stamp pane in the United States Postal Service’s Nature of America Series will feature a painting of a Hawaiian rainforest by Big Island wildlife artist John D. Dawson. The painting—which features the lush native greenery and unique endemic wildlife of our Island rainforests—is the 12th that Dawson has created for the annual U.S. stamp series.

“We’ve been studying these rainforests for five or six years with botanists,” says Dawson. “They actually took us to all of the plants that we wanted to use in the painting.”

The USPS has released a new pane in the Nature of America stamp series annually since 1999, with a goal of educating people about the nation’s diverse plant and wildlife communities. Our Island rainforests are a worthy addition to the series. According to some estimates, more than 90 percent of the native terrestrial species in Hawaii rainforests thrive nowhere else on earth. 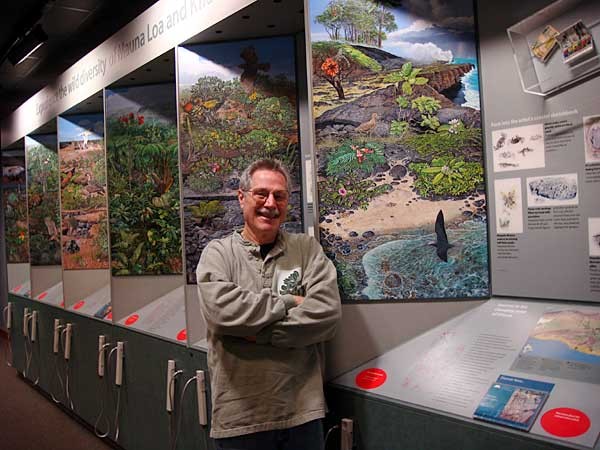 Two dozen different plant and animal species native to the Hawaii rainforest are shown in Dawson’s acrylic painting. Among these are ohia lehua and koa trees, palapalai and hapuu pulu ferns, the happyface spider and opeapea Hawaiian hoary bat and colorful birds like the apapane, iiwi, akepa and omao.

The back of the 10-stamp pane will include text on the characteristics of Hawaii rainforests, and a numbered key to each of the 24 featured plant and wildlife species in the painting. The “Hawaiian Rain Forest” stamp pane’s first day of issue is September 1. The official first day city postmark will be Hilo.

Dawson’s artwork has been featured in the pages of National Geographic magazine and wildlife books, as well as in national parks nationwide and a touring exhibition. His artwork is prominently featured at the Hawaii Volcanoes National Park visitor center in a series of educational panels (pictured, above, with Dawson) depicting the nine ecosystems found within the Big Island park.

Dawson’s Nature of America series paintings have depicted a variety of landscapes, from the arctic tundra to a longleaf pine forest to an ocean kelp forest. The last of these depicted 27 different species of kelp found under the sea.

Says Dawson, “I’ve always wanted to do a Hawaii piece for the series. We love the whole area and we’ve learned a lot about it throughout the years.”

Dawson has lived on the Big Island with his wife Kathleen for more than 20 years.

For more information on purchasing a first-day Hilo, Hawaii, postmarked pane of the Hawaii Rain Forest stamps, visit the USPS Postal Store at www.shop.usps.com. To learn more about Dawson and his artwork, visit his website www.jdawsonillustration.com.