Congratulations to the Hawaiian monk seal—now our official state mammal.

Hawaii Lieutenant Governor Duke Aiona signed a bill into law last week giving the endangered and much-beloved seal the official designation. Wildlife experts—who have long considered the seal one of the world’s most-endangered species—hope the move will raise international awareness about the native Hawaii mammal’s plight.

Roughly 1,200 Hawaiian monk seals remain in the wild—about 80 to 100 of these in waters surrounding the main Hawaiian Islands. The new bill will give the monk seals the same protection as the also endangered humpback whale—Hawaii’s marine state mammal.

Uh-huh. We know the monk seal is also a marine mammal, but why quibble details with good news?

The Hawaiian monk seal population declines by about 4 percent each year. But experts are hopeful that the animal’s designation as an official state symbol will boost seal numbers again. Four monk seal pups have already been born this year. 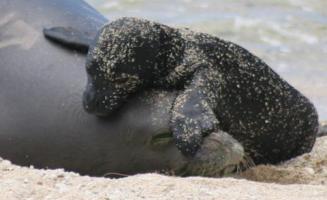 Take a look at the picture, at right. Who wouldn’t want to see more of these cute pups?

The National Oceanic and Atmospheric Administration has been implementing monk seal outreach and education programs for years. Find out more about the Hawaiian monk seal and NOAA’s efforts to protect it here.