How big? Big enough to call off competition under way for the three-day Volcom Pipe Pro, which kicked off earlier this month with 112 of the world’s best surfers vying for $130,000 in prize money.

This morning, contest organizers declared today as the event’s eighth lay day, or as they put it “lei day,” because the waves at the famous Banzai Pipeline were too wild. A news note on the event’s website reads: “The waves are massive and getting gnarlier by the minute, so we had to call another Lei Day.”

The winter waves are rolling into Oahu’s North Shore, with surf expected to top out at a jaw-dropping 35 feet today and subside to 20 feet by tomorrow, according to a high-surf warning issued by the National Weather Service. The swell is expected to gradually subside by Thursday, but will be followed by another swell that may push the waves up to an advisory level toward the weekend. 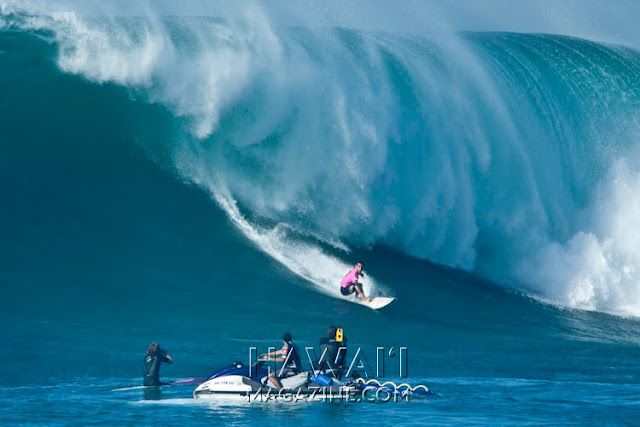 The second round of the Volcom Pipe Pro was held yesterday, and the next round is expected to take place later this week.  The contest holding period will continue through Sat., Feb. 4.

Surfing fans are also buzzing about whether the rising waves in the North Shore’s Waimea Bay will set the stage for a Quiksilver in Memory of Eddie Aikau surfing contest — the world’s longest-running and most prestigious big-wave invitational. The one-day competition is held only when wave heights consistently exceed a minimum 20-foot threshold. This season’s annual hold period runs through Feb. 29.

Total number of competitions since the event was launched about 27 years ago? Eight.

The defending champion is California’s Greg Long. Past champions: Denton Miyamura (Hawaii), Keone Downing (Hawaii), Clyde Aikau (Hawaii), Noah Johnson (Hawaii), Ross Clarke-Jones (Australia), Kelly Slater (USA), and Bruce Irons (Hawaii). This year, the contest’s organizers invited 28 elite surfers and 24 alternates. Slater, a 10-time world champion, is confirmed as a competitor in the 27th edition of “The Eddie.” To check out photos from the last time the contest was held — the 2009 Quiksilver in Memory of Eddie Aikau — click here.

If, as organizers say, “the bay calls the day,” thousands of spectators will flock to the North Shore to catch the competition. Wanna go? Your best bet to avoid traffic tie-ups is to arrive early. Otherwise, you may end up in a long line of vehicles slowly making their way to the Haleiwa area and beyond. Bring binoculars and enjoy the waves.