The story of Damien's path to sainthood, and how he dedicated his life to a community of Hawaii residents with leprosy.

Regardless of religious background, the life’s work of Molokai’s beloved priest has inspired many, including HIV/AIDS sufferers. But how did Damien finally attain sainthood? What did this Belgian priest do for the Hansen’s disease (leprosy) patients living in Kalawao and Kalaupapa on Molokai?

Here is a look at Damien’s path to sainthood, and the story of how he dedicated his life to an entire community of Hawaii residents cast away from the populace because of their illness.

Molokai’s beloved priest dedicated his life to helping many people throughout the Hawaiian Islands. In October 2009, he was officially recognized as Hawaii’s first canonized saint. 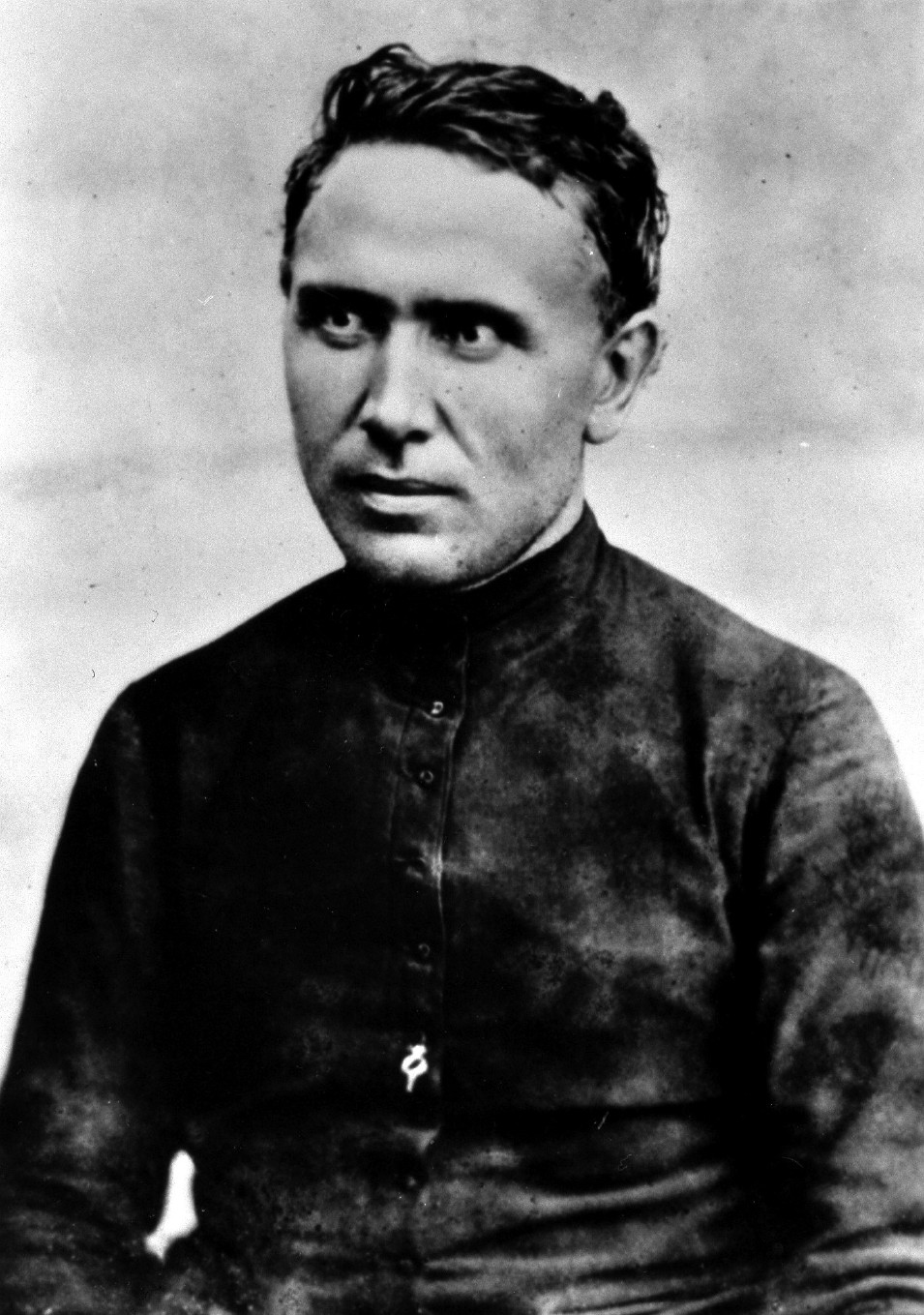 “You may stay as long as your devotion dictates.” Those words from his superior in the Sacred Hearts order changed Father Damien’s life—and put him on a path to sainthood.

In 1863, Damien’s brother, Father Pamphile de Veuster, was headed to Hawaii on a Sacred Hearts mission, but illness prevented him from going. Although Damien (formerly known as Joseph de Veuster) was only a choir brother, he was determined to take his brother’s place. Damien petitioned the highest authority in the Congregation of the Sacred Hearts of Jesus and Mary—and won. His determination eventually led him to spend the rest of his life on a remote Molokai peninsula, where he cared for Hawaii’s exiled sufferers from Hansen’s disease (leprosy). His self-sacrifice certainly influenced his path to sainthood. 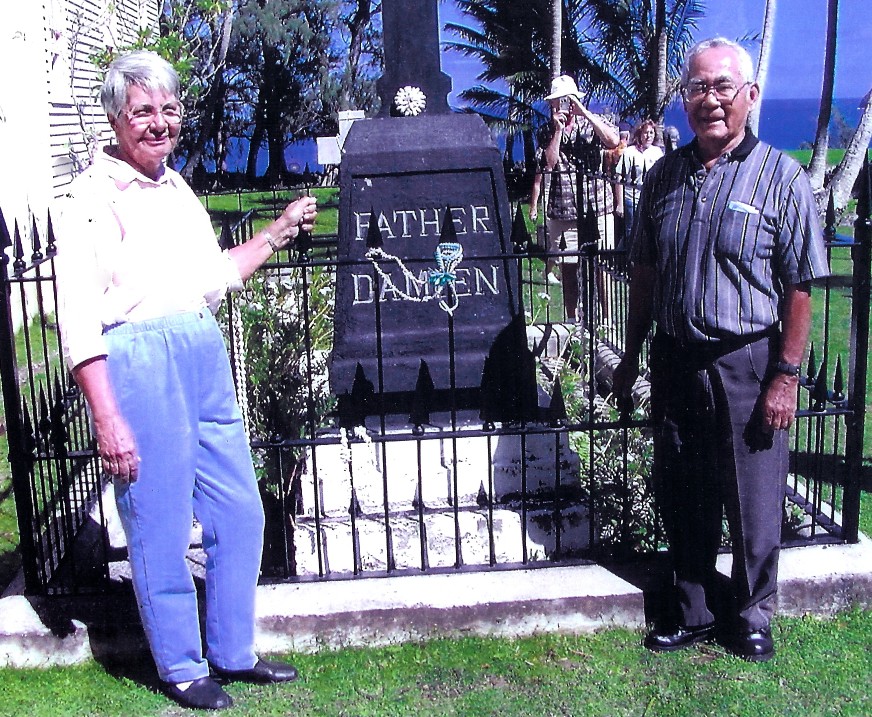 Becoming a saint in the Catholic Church isn’t easy. There is a series of steps that must be fulfilled—Servant of God, Venerable, Blessed and Saint. In 1995, Pope John Paul II beatified Damien, declared him “Blessed,” after church authorities were satisfied that Damien’s intercession cured a nun of intestinal illness in 1895.

The beatification step requires one attested miracle; canonization requires two. In 2008, Catholic authorities attributed the disappearance of Hawaii resident Audrey Toguchi’s incurable cancer to Damien’s intercession. Toguchi (pictured above, with her husband, Yukio) had traveled to Molokai 12 years before to pray at Damien’s grave.

“There were two requests I asked of our dear Lord and Father Damien,” Toguchi, 81, told us. “First of all, please heal me and please find a good doctor who could take care of all these problems I had.” In 1999, Toguchi’s cancer completely disappeared in May, the same month as Damien’s feast day. It was this second miracle that would turn Molokai’s dedicated priest into Hawaii’s first canonized Catholic saint.

Father Damien’s canonization on Oct. 11, 2009, comes 120 years after his death from leprosy—the same disease that took the lives of 8,000 people in Kalaupapa.

Damien arrived in Honolulu on March 19, 1864. On May 21 of the same year, he was ordained as a priest at the Cathedral of Our Lady of Peace (which still stands in downtown Honolulu). He served in several parishes before volunteering to go to Molokai: Maui, the Puna district on the Big Island, and then the vast Kohala-Hamakua parish, which was 80 miles long and 30 miles wide. Damien often had to travel by canoe to reach remote locations. 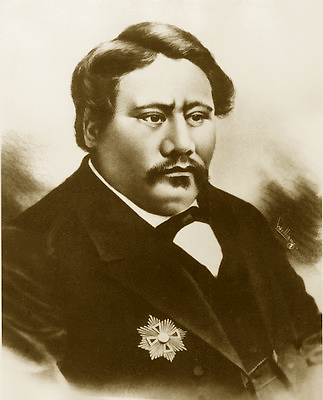 Damien spent nine years on the Big Island—studying the Hawaiian language, eating poi, building churches and baptizing new converts. He was a strong athlete who could climb rocky cliffs, trek through lava fields and scale 10 ravines to get to his parishioners.

While Damien was still on the Big Island, King Kamehameha V (pictured left) approved An Act to Prevent the Spread of Leprosy. The 1865 decree forcibly relocated Hawaii’s Hansen’s disease patients to Molokai’s Kalaupapa peninsula. Patients were simply dropped off and left to survive on their own in the desolate, lawless place.

Catholic patients at Kalaupapa repeatedly pleaded for a priest. At the end of 1872, Father Aubert Bouillon of Maui asked Bishop Maigret if he could go to the peninsula town of Kalawao. His request was denied: Going to the peninsula could be a death sentence.

In the spring of 1873, the bishop decided that, despite the risk, the peninsula’s patients needed a priest. Damien and three other young priests volunteered to serve Kalawao on a rotating basis. Damien was the first to go—and the only one to stay.

On May 10, 1873, Damien arrived at Kalaupapa on a ship from Maui. With no place to go, Damien lived and slept outside under a pu hala (pandanus tree) in Kalawao near St. Philomena Church, which had been previously built by Sacred Hearts brother Victorin Bertrant in 1872. Damien had already encountered Hansen’s disease in the Kohala district in the late 1860s. Many of his afflicted parishioners there had been shipped off to Kalawao. 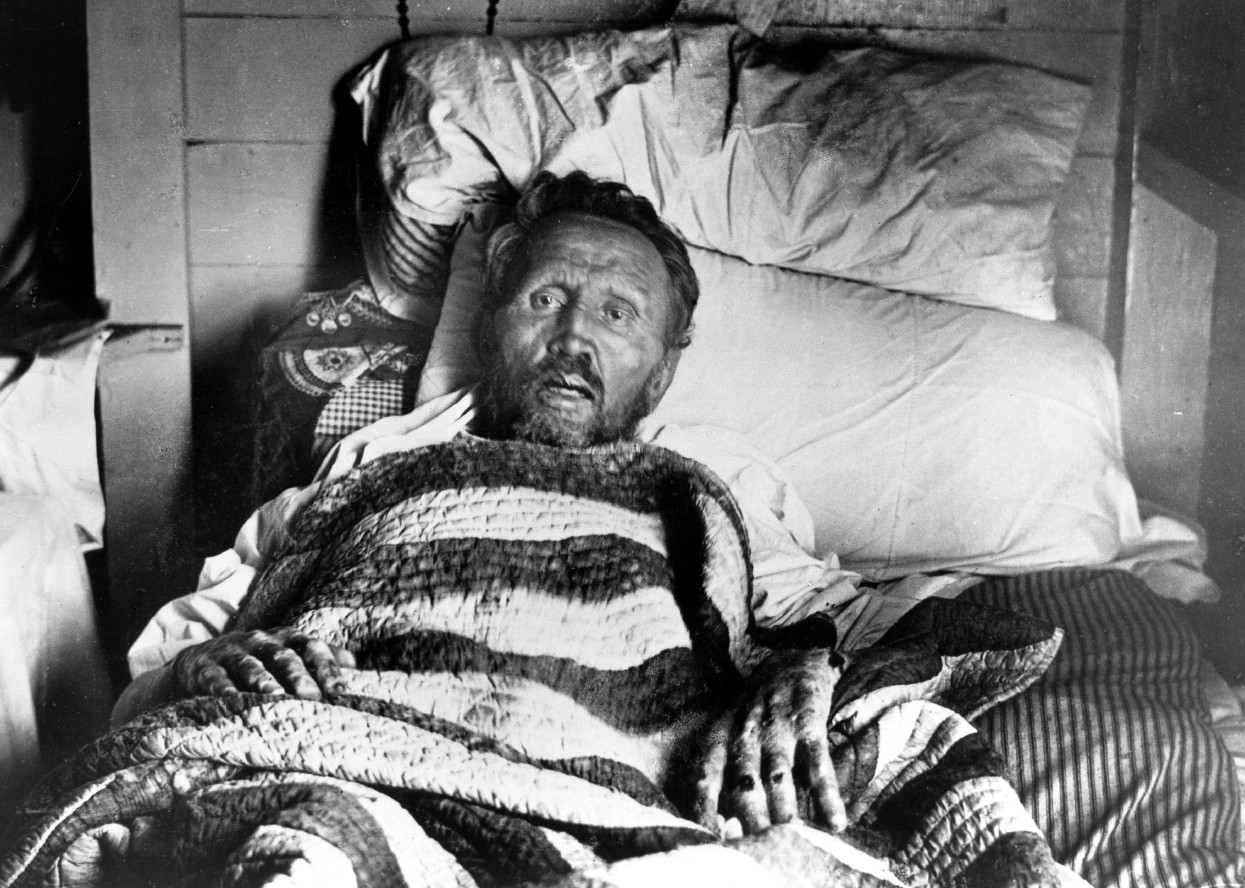 In addition to his priestly duties at Kalaupapa, Damien bandaged the patients’ open wounds, washed their bodies and dug their graves. Utilizing his carpentry skills he built houses, churches, orphanages, coffins and even a water system.

In December 1884, Damien was soaking his feet in a bucket of hot water, when he realized that he couldn’t feel any heat. He immediately knew what was wrong: He had contracted Hansen’s disease. Despite his illness, Damien worked even harder. 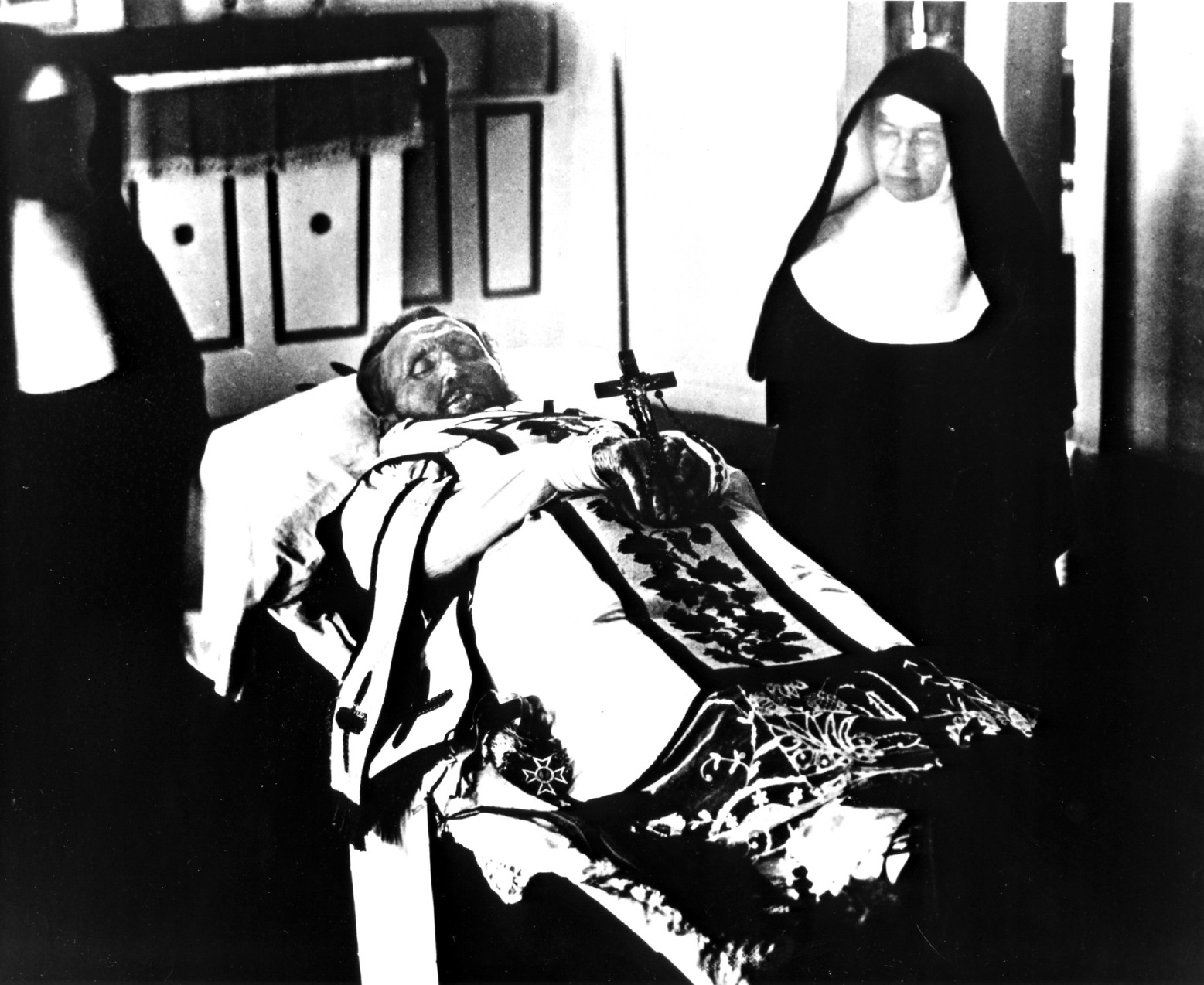 Damien died on April 15, 1889, in Kalawao. He was 49. It was the beginning of Holy Week, the week leading up to Easter. He was buried in a simple grave outside St. Philomena Church in Kalawao. Today, only a relic (the bones of Damien’s right hand) remains there. The rest of his body was taken to Louvain, Belgium, in 1936, at the request of the Belgian government. Another Damien relic—his right heel bone—arrives in Hawaii later this year. (Before arriving in Hawaii, the relic will travel from Rome to Michigan and California. Click here to see the complete schedule of events.) 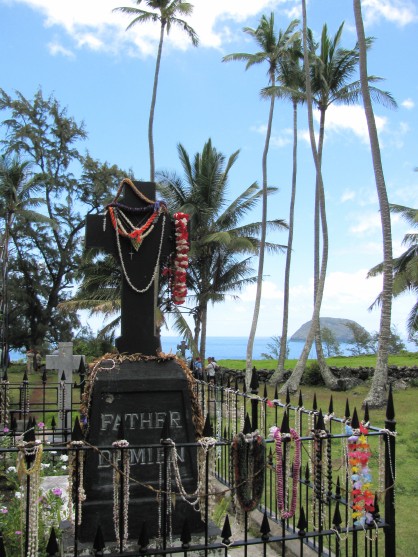 After Pope Benedict XVI declares Blessed Damien a saint at the Vatican on Oct. 11, 2009, Damien’s canonized relic will travel across the United States and through the Hawaiian Islands before arriving at its permanent home in Honolulu’s Cathedral of Our Lady of Peace, where Damien was ordained. The Catholic Diocese of Honolulu and its Blessed Damien/Blessed Marianne Commission have organized celebratory events statewide.

“It’s really exciting, not only for the Catholics, but for the whole state of Hawaii,” says Deacon Wallace Mitsui. “Each island is preparing its own celebration, but the events are open to anyone who wants to see the relic.”

Once Damien becomes a saint, many people will want to visit his original gravesite in Kalawao (pictured right), but the state’s limited-access policy will prohibit most travelers.

“Kalaupapa is not a very accessible place,” says Bishop Larry Silva of the Catholic Diocese of Honolulu. “That’s part of the reason why the Cathedral of Our Lady of Peace was chosen to house the relic.” The bishop hopes that Damien’s sainthood will inspire others “to pursue holiness, be close to God and serve the most needy.”

Although Catholics will honor Damien as a saint, Toguchi believes the beloved priest should be an inspiration to everyone, regardless of religious beliefs. Damien is the unofficial saint for many HIV/AIDS sufferers.

“No matter what religion you belonged to, Father Damien loved them all,” says Toguchi. “I think his canonization will inspire people who already are distressed. It will give them a sense of hope.”