A telescope powerful enough to offer a time machine’s glimpse into the beginnings of the universe will be built on the summit of Hawaii’s Mauna Kea.

A consortium of United States and Canadian universities today announced that the summit of the dormant Big Island of Hawaii volcano would be home to its $1.2 billion Thirty Meter Telescope (TMT)—billed as the world’s largest optical telescope. Mauna Kea’s summit complex of observatories had been in close competition with Cerro Armazones mountain in Chile’s Atacama Desert for the telescope.

When construction of the telescope is completed in 2018, the TMT’s lens-like mirror will stretch 30 meters—or nearly 100 feet—in diameter, allowing it to collect 10 times more light than other Earth-based telescopes. This all translates into some serious stargazing.

By comparison, the Keck and Keck II telescopes—also atop Mauna Kea—are currently among the world’s largest and most powerful optical telescopes, yet their mirrors only measure 10 meters each. 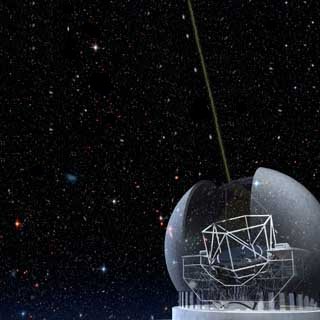 Scientists hope the TMT will offer them views up to 13 billion light years away—a distance so great that they’ll essentially be going back in time to witness the first stars and galaxies forming.

The TMT mirror’s size and design will also correct the blurring effect of Earth’s atmosphere, allowing the telescope to study the Universe as clearly as if the telescope were orbiting in space.

It will take some time for construction of the TMT to begin on Mauna Kea. A formal proposal from TMT Corp. still needs to be drafted and submitted to the Hawaii State Department of Land and Natural Resources. The Thirty Meter Telescope Observatory Corp. is made up of the University of California, the California Institute of Technology and the Association of Canadian Universities for Research in Astronomy.

Want to see what the summit of Mauna Kea looks like? Click here for video of a sunset trip HAWAII Magazine took to the summit in June 2008.