After a long journey across the Atlantic and Pacific Oceans, the relic of Hawaii’s Saint Damien last week finished its three-week journey—from the Vatican City, through Michigan and California and, finally, to the Hawaiian Islands.

Saint Damien de Veuster cared for the people who suffered from Hansen’s disease (leprosy) in Hawaii for 16 years on the island of Molokai’s Kalaupapa peninsula. He eventually died of the same disease that took the lives of his patients. He was canonized a saint by the Catholic Church on Oct. 11, 2009, but his dedication and hard work are admired by many people of different cultures and religious faiths. This was clearly apparent at a celebration on Sunday, appropriately held on All Saints’ Day (Nov. 1).

The ceremonies began at noon in downtown Honolulu with a “Celebration of Mass in honor of Saint Damien” at the Cathedral of Our Lady of Peace—the same church where Damien was ordained a priest. The church was filled to capacity. Large tents, chairs and television sets were set up outside to accommodate the crowd. Not a single seat was empty. Some even stood and watched from the side.

But it wasn’t a day only for the Roman Catholics. After mass, the relic—Damien’s right heel bone, which was in a closed koa box—was taken to nearby Iolani Palace, where an interfaith ceremony was held in Damien’s honor. The relic was greeted at the palace’s gates with an oli (chant) and a Hawaiian conch shell blower. (Click here to watch the video.) 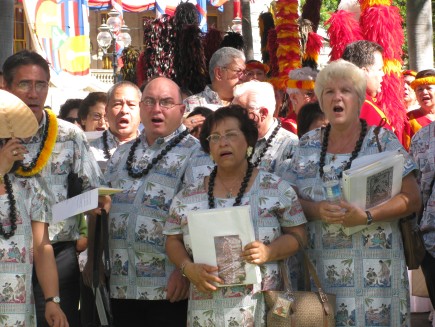 Hundreds attended—many sporting Damien aloha shirts and dresses, while others carried Damien-themed banners. Iolani Palace was even “dressed” for the occasion, decorated in the colors of the Hawaiian flag. A large Hawaiian flag and a flag displaying the family crest of King Kalakaua was draped over the palace entrance.

Damien was not a stranger to the alii (Hawaiian royalty/chiefs). He often wrote them letters written in Hawaiian language asking for clothing and other supplies for his patients in Kalawao on the Kalaupapa peninsula. He even impressed then-princess Liliuokalani so much during her visit to the Kalaupapa peninsula that she asked her brother, King Kalakaua, to award Damien the Knight Commander of the Royal Order of Kalakaua. 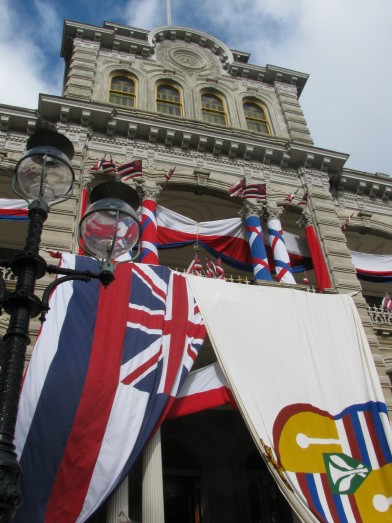 “As we embrace this memorable relic, a symbol of God’s divine favor,” said Abigail Kawananakoa, “we shall forever remember with the highest esteem, the goodness, the charity and the aloha of our blessed Saint Damien.”

The celebration also featured hula performances, music from the Royal Hawaiian Band and several guest speakers, including a few who read excerpts from the correspondences between Damien, Queen Kapiolani and Queen Liliuokalani. (Click here for a clip of one of the hula performances.)

It was made clear that Damien has a worldwide influence. Most of the guest speakers agreed that he has also become a representative of the Islands.

“To the people of the world and, especially those here in Hawaii, Saint Damien is an icon of humanitarian service,” said Lt. Gov. Aiona. “His canonization into sainthood perpetuates the spirit of aloha for all of Hawaii’s past, present and future generations. It’s a time to be proud Catholics and residents of the state of Hawaii.”

The ceremony was followed by a procession to the Liliuokalani and Damien statues on the grounds of the Hawaii State Capitol. As prayers were chanted in Hawaiian, the relic was placed on a miniature koa outrigger canoe and carried to the Cathedral of Our Lady of Peace. (Click here for video at the Damien statue.) 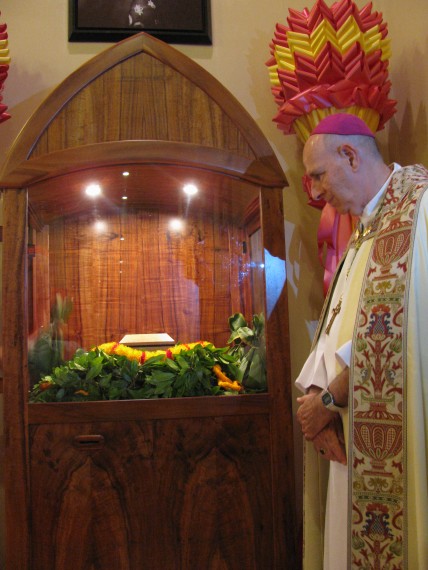 Others in the procession included the Sisters of Saint Francis, the Knights of Columbus and Audrey Toguchi, the Oahu woman who attributed her miraculous cure from terminal cancer to Damien. Toguchi said that after she prayed for Damien’s intercession, her cancer disappeared. Toguchi’s situation was deemed the second miracle needed by the Catholic Church to make Damien a saint.

The celebration ended with an evening prayer service at the Cathedral at Our Lady of Peace and a blessing of the new koa shrine that will hold Damien’s relic permanently. Special services will be held daily through Friday, Nov. 6, to honor the relic.

Want to visit the relic on your next trip to Honolulu? The Cathedral of Our Lady of Peace is open to the public and offers Mass on Sundays, weekdays and Saturdays. (Click here for the complete schedule.) The cathedral is located at 1184 Bishop Street in Honolulu; call (808) 536-7036.

Here are some highlights from last weekend’s relic celebrations. Click on the slideshow screen below for larger photos.