A couple of readers wrote, lamenting that they couldn’t attend Jack Johnson’s Kokua Festival shows in Waikiki this weekend.

This is the fifth-annual go-round of Johnson’s music festival, happening this Saturday and Sunday at the Waikiki Shell. Johnson, Dave Matthews and Tim Reynolds  headline, with Mason Jennings and Hawaii acts Paula Fuga and Go Jimmy Go as support.

Tickets for the fest sold out mere hours after going on sale in February. We’re sad for our readers that, unlike previous years, this year’s concerts won’t be streamed live on the Web.

Ally Estrada of Wichita, Kansas, asked which music acts had played each Kokua Festival, and whether we thought attending next year was worth a trip to Hawaii.

We think exploring the scenic wonders, cultures, food, activities and everything else we have to offer in Hawaii is always worth a visit, period. However, as long-term residents, we may be biased.

You might also be swayed by the fact that all the cash (minus Ticketmaster fees) goes to the Kokua Hawaii Foundation—the nonprofit founded by Johnson and his wife Kim to support Hawaii-based environmental education programs. 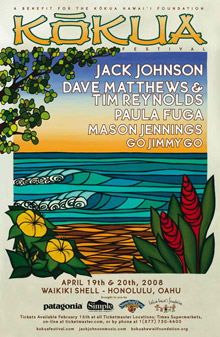 The four words of advice you really need if you want to go to Kokua Festival 2009, tho?  BUY. TICKETS. RIGHT. AWAY. We’re talking the-minute-they-go-on-sale.

We’ll post the date as soon as we know.

And here’s the answer to your first question, Ally. Jack, no surprise, played every one of the fests.