Lost addicts unite! Or at least start planning to be on Oahu on Oct. 17.

That’s when the annual Hawaii International Film Festival will celebrate the cast and crew of the ABC TV series Lost—currently filming its final season in Hawaii—with a full day of events no fan of the show will want to miss.

We’ll start with the main event: “An Evening with Damon Lindelof and Carlton Cuse,” at the Royal Hawaiian Theater in Waikiki, at 8 p.m.

For diehard fans of the Emmy Award-winning series, co-creators and showrunners Lindelof and Cuse are the real Lost luminaries—the creative masterminds who’ve guided the direction of the series’ complex, multi-layered story arc since Lost‘s premiere in 2004. A good portion of the evening will likely be turned over to the duo’s behind-the-scenes stories and history with Lost, as well as fielding questions from the audience on all manner of series minutiae. (One from us: Do Richard Alpert’s feet have four toes each? Trust me, if you’re a Lost addict this is not a stupid question.)

The evening will also feature guest appearances by Lost cast and crew members—though exactly who will show up hasn’t been announced yet. Lindelof and Cuse will also receive HIFF’s “Vision in Film Award”—previous recipients include directors Ang Lee and Zhang Yimou. The fest’s inaugural “Mahalo Nui Loa Award” will be presented to Lost executive producer and director Jack Bender and co-executive producer Jean Higgins.

But the evening Q&A/awards program with Cuse and Lindelof isn’t the only event for Lost fans on Oct. 17.

A full day of Lost master class seminars covering topics ranging from producing and directing the show, to production design, costumes and props will precede the evening event, on the afternoon of Oct. 17. Classes will be held at the Regal Dole Cannery Stadium 18 Cinemas (735B Iwilei Rd, Honolulu). Here’s the schedule: 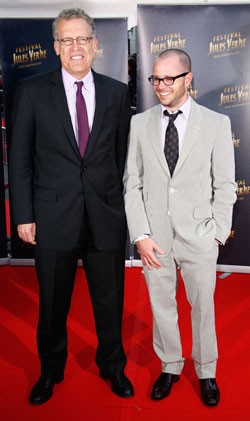 This year’s 29th annual Hawaii International Film Festival is set to run Oct. 15 to 25, 2009, at Regal Dole Cannery Stadium 18 Cinemas on Oahu. The fest’s complete film schedule, featuring more than 170 films from 40 countries, will be released later this month.

The sixth and final season of Lost will air on ABC in January or February 2010.

UPDATE, 9/25/2009: HIFF’s full 2009 schedule is now online, click here. Check out HawaiiMagazine.com on the week of Oct. 15 for an update on HIFF events, screenings, awards and our list of must-see fest films.