Docent Georgia Wong stands at the entrance to the Bernice Pauahi Bishop Museum’s Pacific Hall with her arms extended, beckoning us closer.

“I’m going to take you on a voyage,” she says to the half-dozen visitors who have assembled for a guided tour of the museum’s newly renovated and renamed hall. As I move forward with the group, my gaze is pulled upward to scenes of marine life and rolling waves playing across a 29-foot video screen suspended from the hall’s second-floor ceiling. The moving images bathe the hall in a gentle blue light, fitting for an exhibition space designed to celebrate the 6,000-year history of human migration across the Pacific Ocean.

Wong’s first stop on our tour is a large map of the Pacific, inlaid into the hall’s gleaming wood floor. Pointing to Asia and the vast Pacific beneath our feet, she tells the story of the countless adventurers who left their home islands, traveling thousands of miles across open sea in voyaging canoes, their destinations often unknown. Wong then turns our attention toward a modern mural at the top of the hall’s grand staircase, depicting migration pathways, stars and canoes, all flowing over expansive ocean.

“All of the people of Oceania are in [the mural] because we are still here,” Wong says. “There is a story and a pattern to Polynesia. It is not just the voyage. In the Islands, there are so many interactions.”

Nestled in the urban Honolulu neighborhood of Kalihi, the 125-year-old Bishop Museum campus is Hawai‘i’s premier research and cultural museum, home to the largest collection of historic, scientific and cultural Polynesian artifacts in the world. The museum’s first and oldest buildings, Hawaiian Hall and adjacent Polynesian Hall, have always been its crown jewels, constructed in the Richardsonian Romanesque architectural style popular in the 1890s and housing the bulk of the museum’s Hawaiian and Polynesian artifacts.

In 2005, Bishop Museum embarked on a monumental $24.5 million project to restore both halls. Hawaiian Hall closed for its overhaul first, reopening in 2009. Shuttering soon after for three years, Polynesian Hall reopened in September with a new name, Pacific Hall, reflecting the museum’s new, broader focus for the hall’s exhibits, extending beyond Polynesia to explore the cultures of multiple Pacific Islands and their connections. 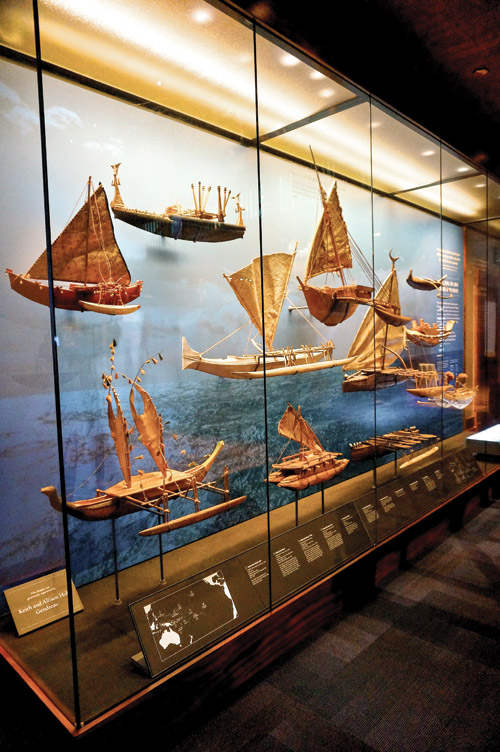 The story of the meticulously restored Fijian fishing canoe’s journey to Pacific Hall is particularly interesting. One of the hall’s first installations and, raised high above its two-story central atrium, its centerpiece display, the canoe was originally obtained in the mid-1980s by John Koon, a master mariner, marine surveyor and rigger. To acquire it, Koon exchanged a 36-inch chainsaw, 120 pounds of bronze screws, other hardware and mosquito netting with a family from Fulanga Island in Southern Fiji. He then had it shipped to Kaua‘i, where he restored it to its original luster.

On one end of Pacific Hall, 8-year-old Destiny Sinapati is trying on traditional Pacific garb at a hands-on kiosk. She laughs infectiously as she shows off a grass skirt. Destiny’s mom, Chantal Noa, reveals that she was herself a child the last time she visited the hall.

The renovation of Pacific Hall combines design ideas collected from Bishop Museum archaeologists, anthropologists, cultural historians and staff members in conjunction with Ralph Appelbaum Associates, one of the world’s leading museum design firms. The exhibits are reflective of the most up-to-date research about the migration of Pacific peoples across multiple millennia, and highlight new initiatives being undertaken to preserve the voyaging traditions of the world’s largest ocean. The most important end result of the renovations for many Bishop Museum staff members, however? The historical and thematic transition for visitors moving from Hawaiian Islands-focused Hawaiian Hall to Pacific Hall is now seamless, reinforcing the message that the histories of all the people of the Pacific are intertwined. 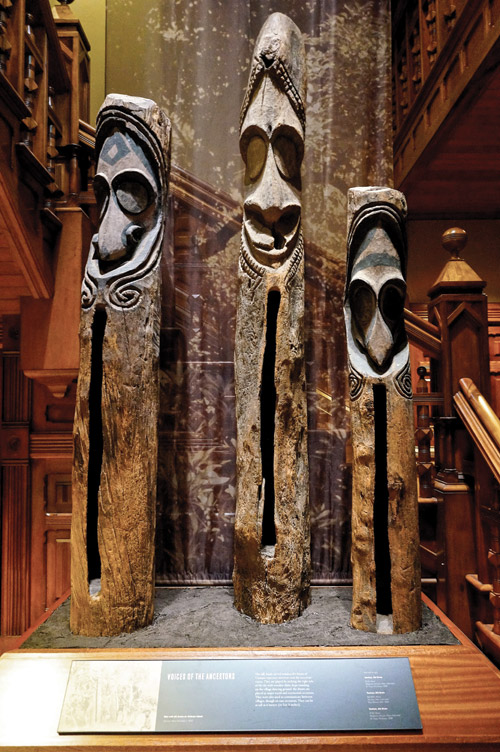 “It’s actually connecting Hawai‘i to the Pacific and to the past,” says Bishop Museum assistant anthropologist Mara Mulrooney of the new Pacific Hall. A member of the museum’s redesign team, Mulrooney talks about the space excitedly. “The emphasis is on the sea that connects us, rather than the sea that divides us.”

Our docent, Wong, wraps up our 25-minute guided tour of Pacific Hall urging visitors to also explore the easily navigable space on their own.

“There’s just so much to see,” says Wong. “We have the Pacific Ocean here at the museum.”