Today marks the 68th anniversary of the attack on the United States’ naval base at Pearl Harbor, Oahu, on Dec. 7, 1941.

At Pearl Harbor this morning, the attack will be remembered with a ceremony at Kilo Pier, which directly faces the National Park Service’s USS Arizona Memorial. The event is free and open to the public.

U.S. Navy boats will depart from the USS Arizona Memorial visitor center between 6:20 and 7 a.m. to transport visitors to Kilo Pier. Seating on the boats will be limited, and will be first-come, first-served. The ceremony, scheduled to begin at 7:40 a.m., will include a Hawaiian blessing, a rifle salute and music by the U.S. Pacific Fleet Band.

A moment of silence will be observed at 7:55 a.m., the exact moment the attack began. The ceremony will also honor attack survivors as well as the 2,345 military personnel and 57 civilians who lost their lives on Dec. 7, 1941.

On the following pages we take you to the USS Arizona Memorial, and reflect on the day that changed the island of Oahu, Hawaii, the nation and the world with our feature Remembering the Battle—first published in the November/December 2008 issue of HAWAII Magazine.

Click here for a photo slideshow, and here for a video that accompanies the story. 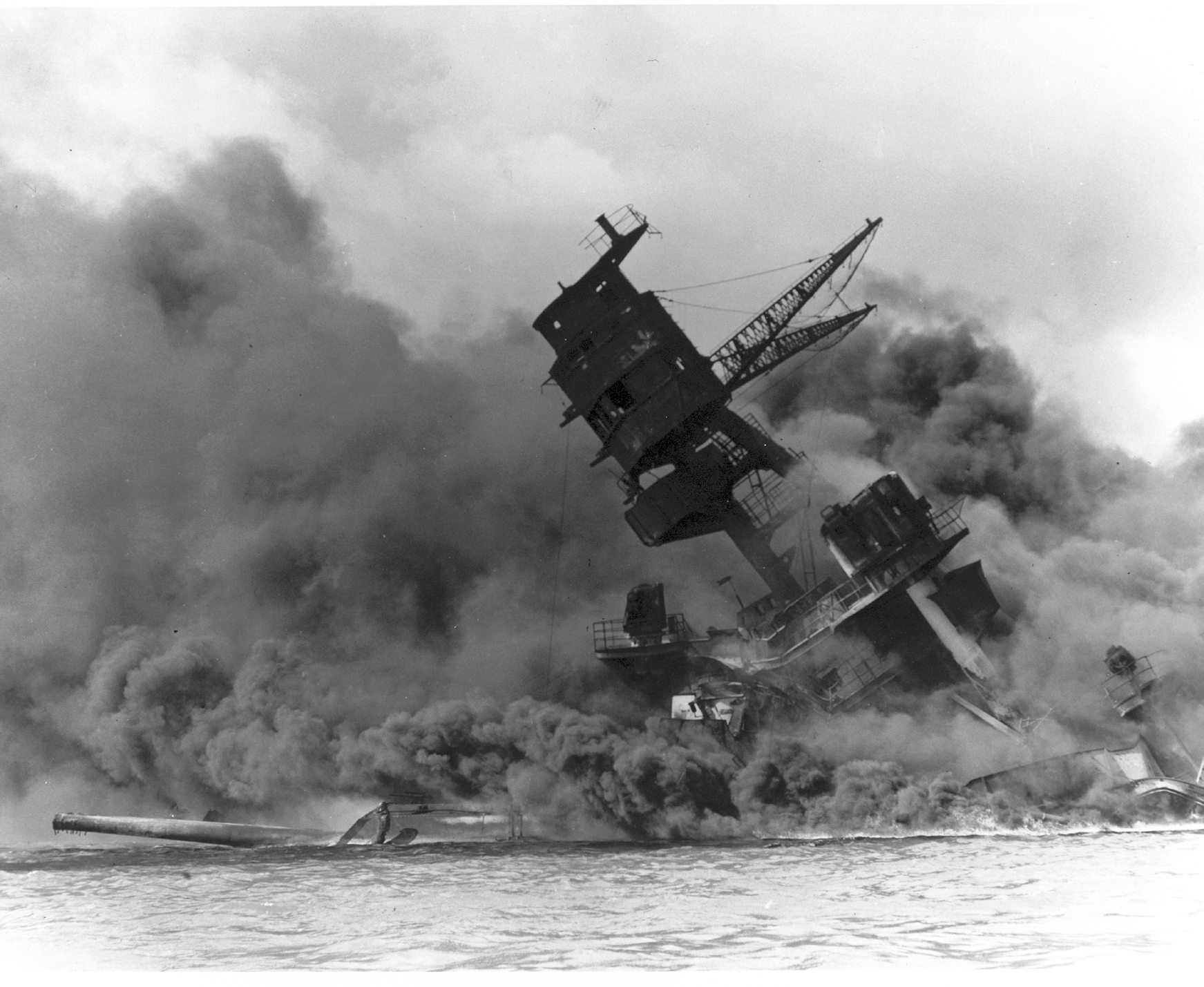 Hawaii’s visitor attractions usually bring a smile to a traveler’s face. But at Oahu’s most popular attraction, the USS Arizona Memorial, visitors sometimes leave in tears.

Every year, approximately 1.5 million visitors travel to the USS Arizona Memorial, where 1,177 crew members lost their lives on Dec. 7, 1941. More than 900 sailors and marines are still entombed there.

Like many Hawaii residents, I’ve often passed by Pearl Harbor on the way to Honolulu or to Oahu’s Leeward side, but I never thought much about the memorial—until I went to see it myself. 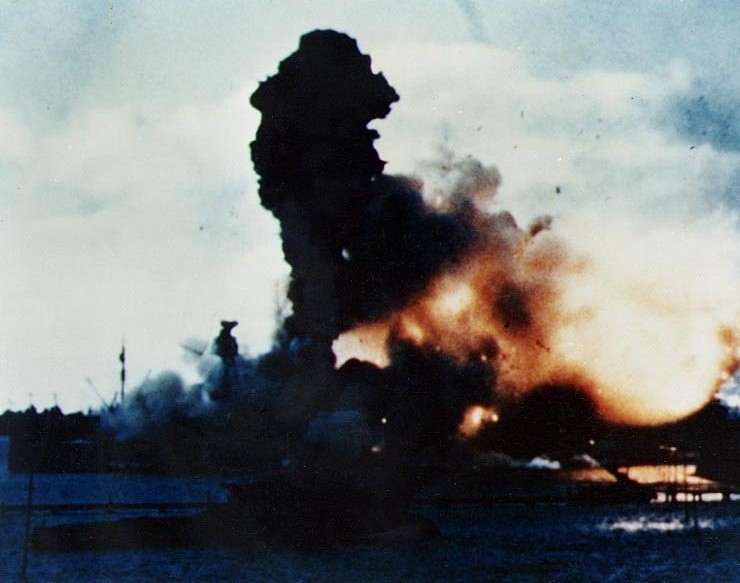 Before riding on a boat to the memorial, the tour began with a 22-minute historical film. It was like watching a movie that I already knew the ending to, but I was still caught off guard. When I saw the USS Arizona struck by an aerial bomb, unexpected tears filled my eyes. The explosion and black smoke engulfed the battleship. Watching the battle on the theater’s big screen was more powerful than reading about it in history class.

As we walked around the memorial, tears welled up in many eyes, including mine. The memorial is 184-feet long and divided into three sections: the entry room, the assembly room and the shrine room. Most visitors shy away from the shrine room because the carved names on the marble wall can be overwhelming. Next to the names of the fallen are the names of the USS Arizona survivors who requested to have their ashes scattered over the battleship. It was their way of reuniting with their shipmates. 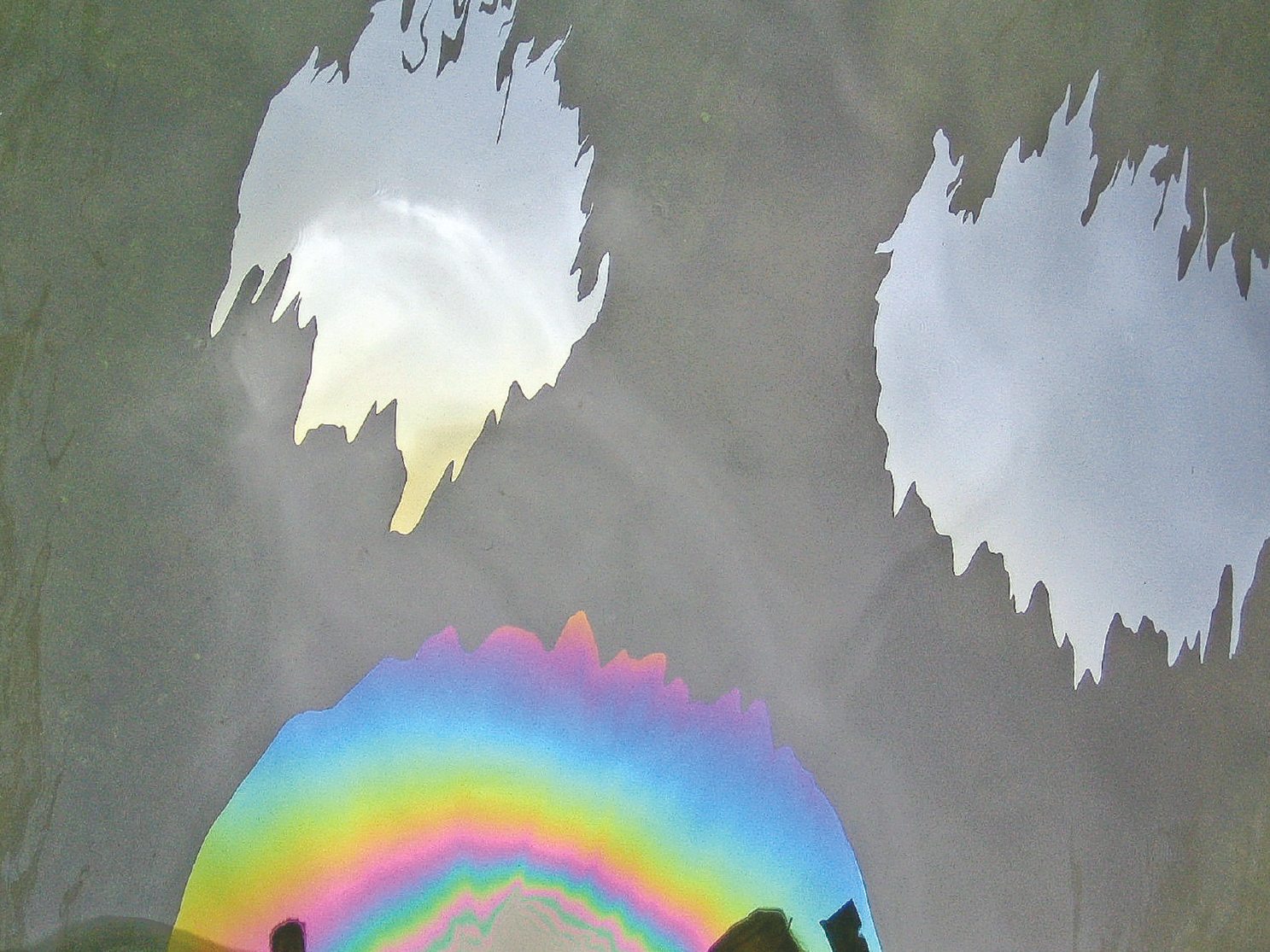 “Actually, the ship in some ways is still alive,” says park historian Daniel Martinez. “When you see and smell that oil, you’ll be transported instantaneously to Dec. 7, 1941. It’s the same oil that has been leaking from the ship since then. Some people say the ship is still bleeding and others consider the oil to be sending a message to people.”

The ship’s oil, leaking into the harbor, is eerily interesting. Drops magically appeared on the water’s surface, some shiny silver, some as iridescent as a mother of pearl shell.

As we began to board the boat, it started to rain heavily. It was as if the heavens were crying, too. The dark clouds that filled the skies fit the somber mood. But the rainy weather didn’t dampen my experience, nor did it seem to bother the other visitors. It almost seemed appropriate as we departed the watery graveyard. 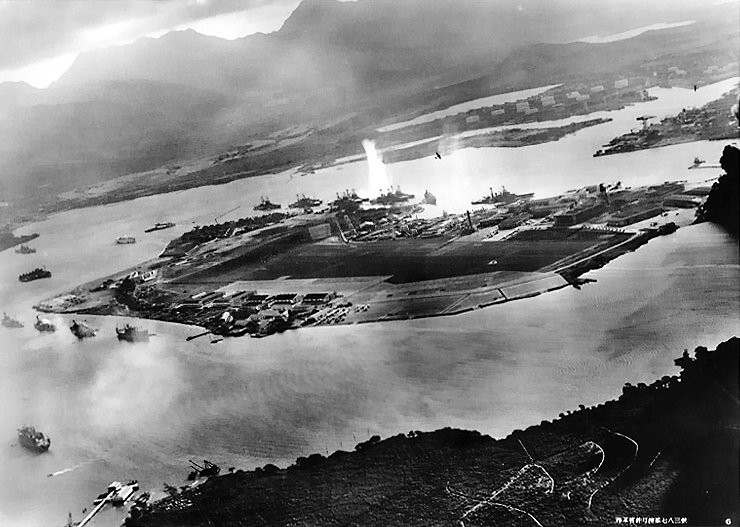 When we returned to shore, I was amazed to see how many films and books at the gift shop were about the Dec. 7 attack.

Hollywood has its own way of remembering the battle, with films like From Here to Eternity, Tora! Tora! Tora! and In Harm’s Way, but, according to Martinez, they are all pure fantasy. Even the 2001 film Pearl Harbor, to my dismay. 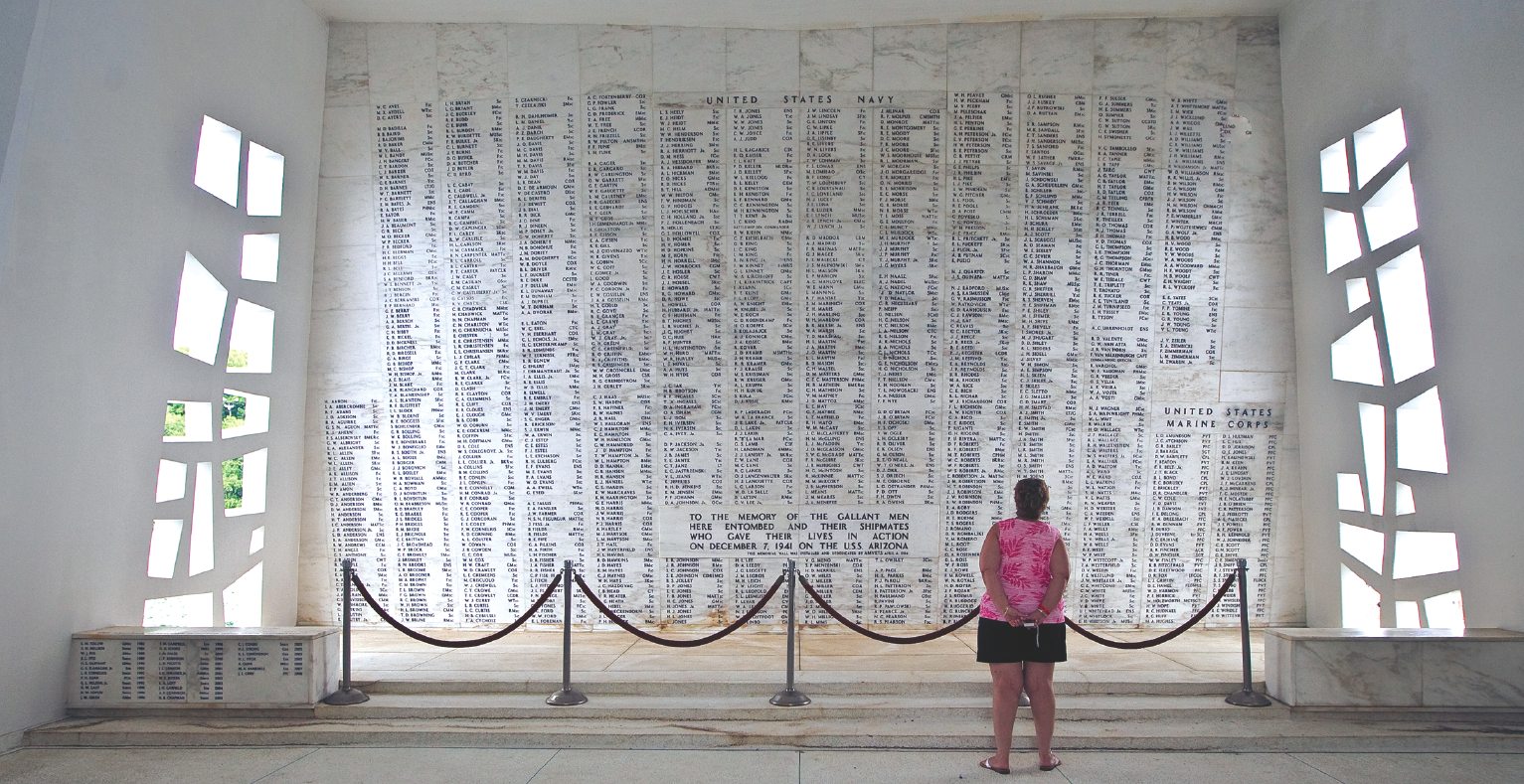 “Almost every major film about Pearl Harbor has been filmed here,” said Martinez. “They used the original attack sites, but the only two things that they got right in the film was that it happened at Pearl Harbor and on Dec. 7.”

Despite the fictional characters played by Ben Affleck and Josh Hartnett, Martinez appreciates how the film inspired a greater interest in Pearl Harbor.

“As bad as the history in the film was, the byproduct made the war relevant to the younger generation,” says Martinez, who’s noticed an increase in a younger crowd at the museum.

Another Hollywood fantasy? The Kolekole Pass. “In many movies and pieces of literature, the planes were shown coming from the Kolekole Pass,” says Martinez, “but they never did—only in Hollywood. It’s so funny because even the Japanese fell prey to it themselves in a movie that they made in 1960 called, I Bombed Pearl Harbor. Some myths get turned into facts.” 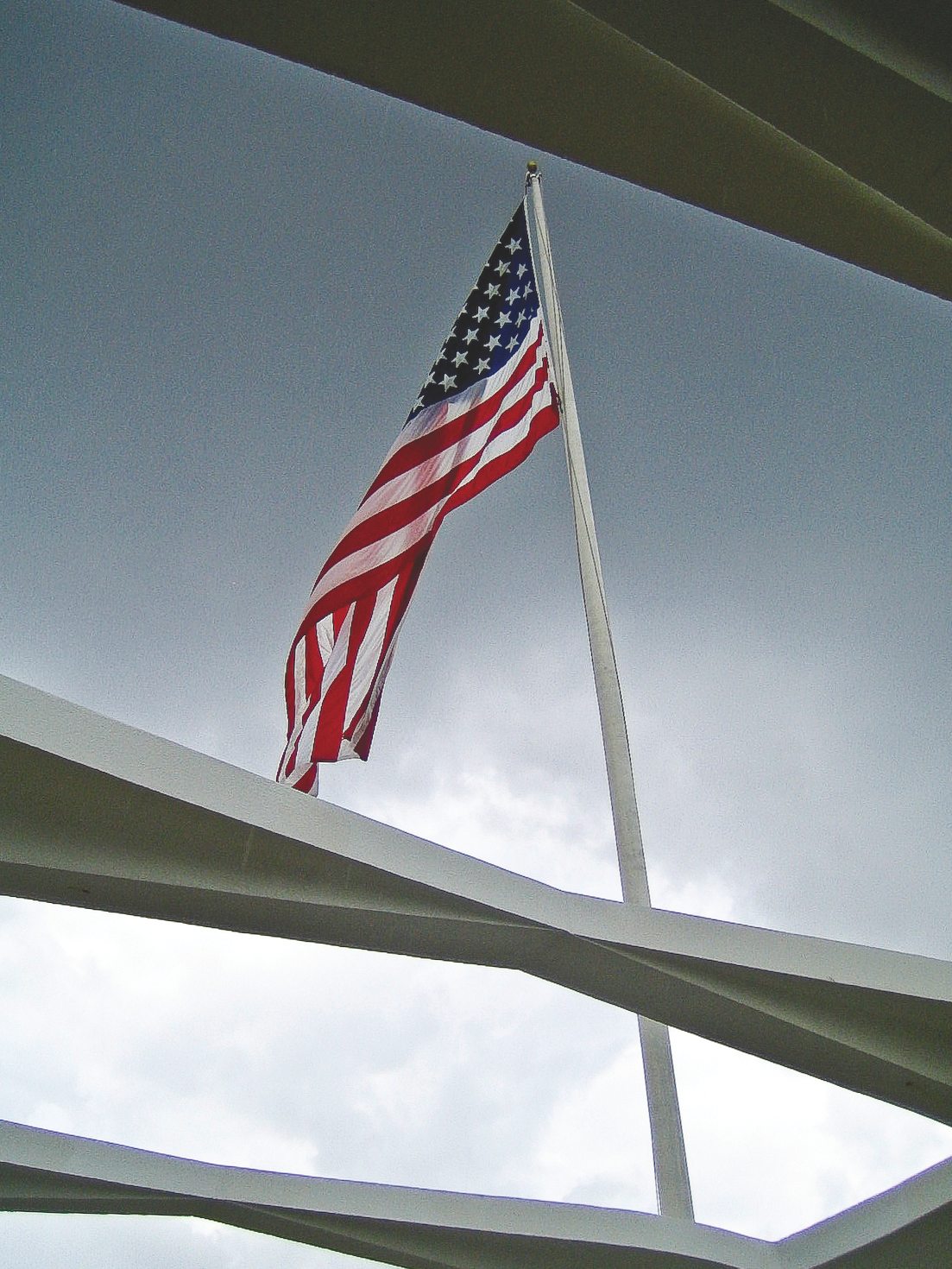 Dec. 7, 1941, is often referred to as the “Day of Infamy,” with a strong emphasis on the destruction at Pearl Harbor. But after visiting the memorial and its museum, I realize that it was a day that affected the whole island of Oahu. Airfields at Hickam, Wheeler, Ewa, Kaneohe and Bellows were also under fire at the same time battleships were being destroyed at Pearl Harbor. Oahu became a battlefield.

“Pearl Harbor is the generic term for the attack on Oahu,” says Martinez. “All these civilians who worked at Oahu’s airfields were under fire just like the military was, but who tells their stories?”

That’s the purpose of the museum and visitors center.

“Here, they will never be forgotten,” he says.