Hawaii loves baseball, but it doesn’t have a Major League Baseball team.

Actually, it doesn’t have any professional sports teams, that is except for the Hawaii Winter Baseball League. This winter league is always stocked with up-and-coming players from the Major League’s farm teams and from Japan’s professional leagues.

HWB has a history of hosting Major League players before they made it big. Famous HWB alumni include Ichiro Suzuki, Jason Giambi, Alex Ochoa and Benny Agbayani. (Click here for a more complete HWB history). 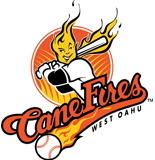 We liked HWB’s spirited match-ups, cheap ticket prices ($3 to $6 per game) and kid-friendly environment so much, we named it “best family activity” in our recent HAWAII Magazine 2008 “Best of Hawaii” cover feature.

For a complete schedule of this season’s games and more information on Hawaii Winter Baseball click here. And since I know you’re grooving on the above logos and are about to e-mail me, here’s a link to HWB’s logo wear page.