Founded in 1836 by King Kamehameha III, the Royal Hawaiian Band is the only band in the United States that can claim a royal origin. It’s also the oldest and sole full-time municipal band nationwide.

Initially known as the “King’s Band,” its original members performed at state occasions, funerals, and marched in parades. Also, the band accompanied Hawaii monarchs on trips to the outer islands and eventually went on to perform in Japan, Canada and Europe as well as in various venues on the U.S. mainland.

These days, the Royal Hawaiian Band presents free outdoor concerts on Iolani Palace grounds, near downtown Honolulu, on most Fridays. The midday performance at the palace grounds features both past and present Hawaii music.  This weekend, the band will stage a second one-hour show at the palace, starting at noon on Sunday.  For additional information about performances, click here.

Among the band’s tunes are songs that date back to the time of King David Kalakaua (reign: 1874-1891) and the Kingdom of Hawaii’s last monarch, Queen Liliuokalani (reign: 1891-1893). During those decades, Prussian Heinrich “Henri” Berger, an officer in the imperial German army, became the band’s leader. Berger collaborated with King Kalakaua in composing Hawaii’s national anthem, which is now the state song, Hawai’i Pono’i. (The king penned the lyrics and Berger wrote the music.) The last song played at every Royal Hawaiian Band concert is Aloha ‘Oe (Farewell to Thee). Queen Liliuokalani composed the lyrics, and Berger arranged the music.

For more information about the Royal Hawaii Band, click here. 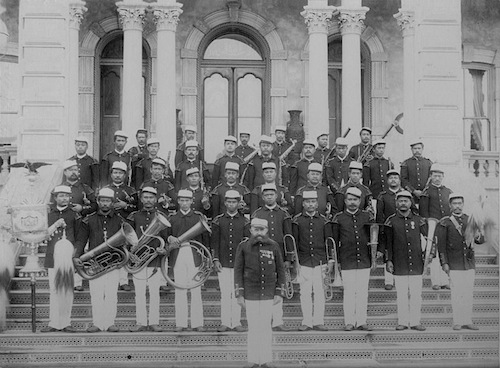