This Oceanfront Property Gets a Landscaping Makeover

A North Shore home sits pretty by the water.

This awe-inspiring home along sunset beach on O‘ahu’s North Shore is a surfer’s dream house and a wholesome place for the homeowners and their children to enjoy inside and out. 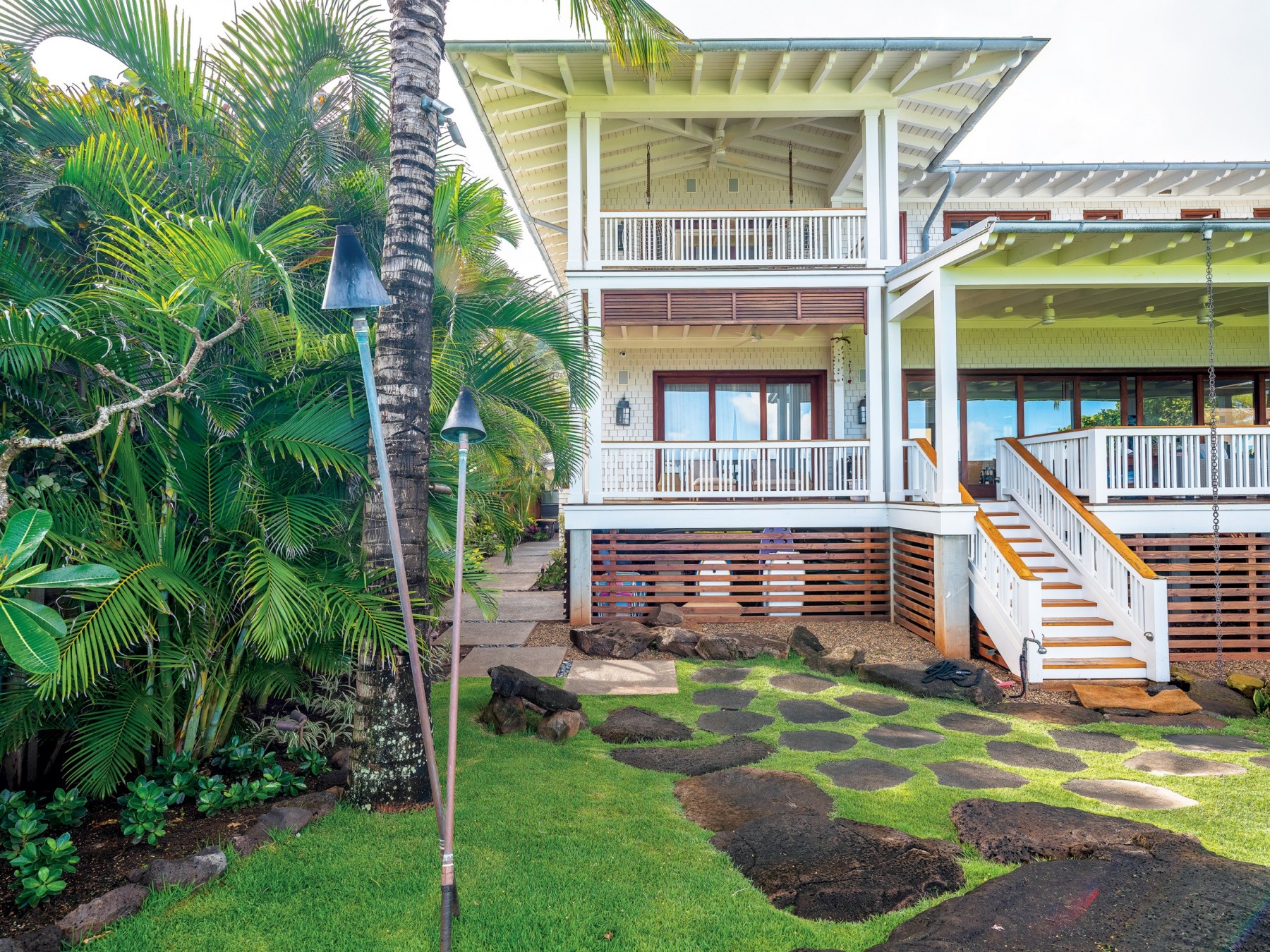 Navigating from the side of the house to the backyard is easier with the addition of LED Beachside Lighting and existing tiki torches. Steve’s Gardening Service implemented puka lava pavers on the lawn to help keep the mud down and to prevent falls.

The oceanfront property wasn’t always this picture perfect. The overgrown vegetation, loose gravel and massive boulders of the original landscape weren’t suitable to the current homeowners’ lifestyle. They needed a place that would be ideal for their active family and able to withstand the coastal climate. 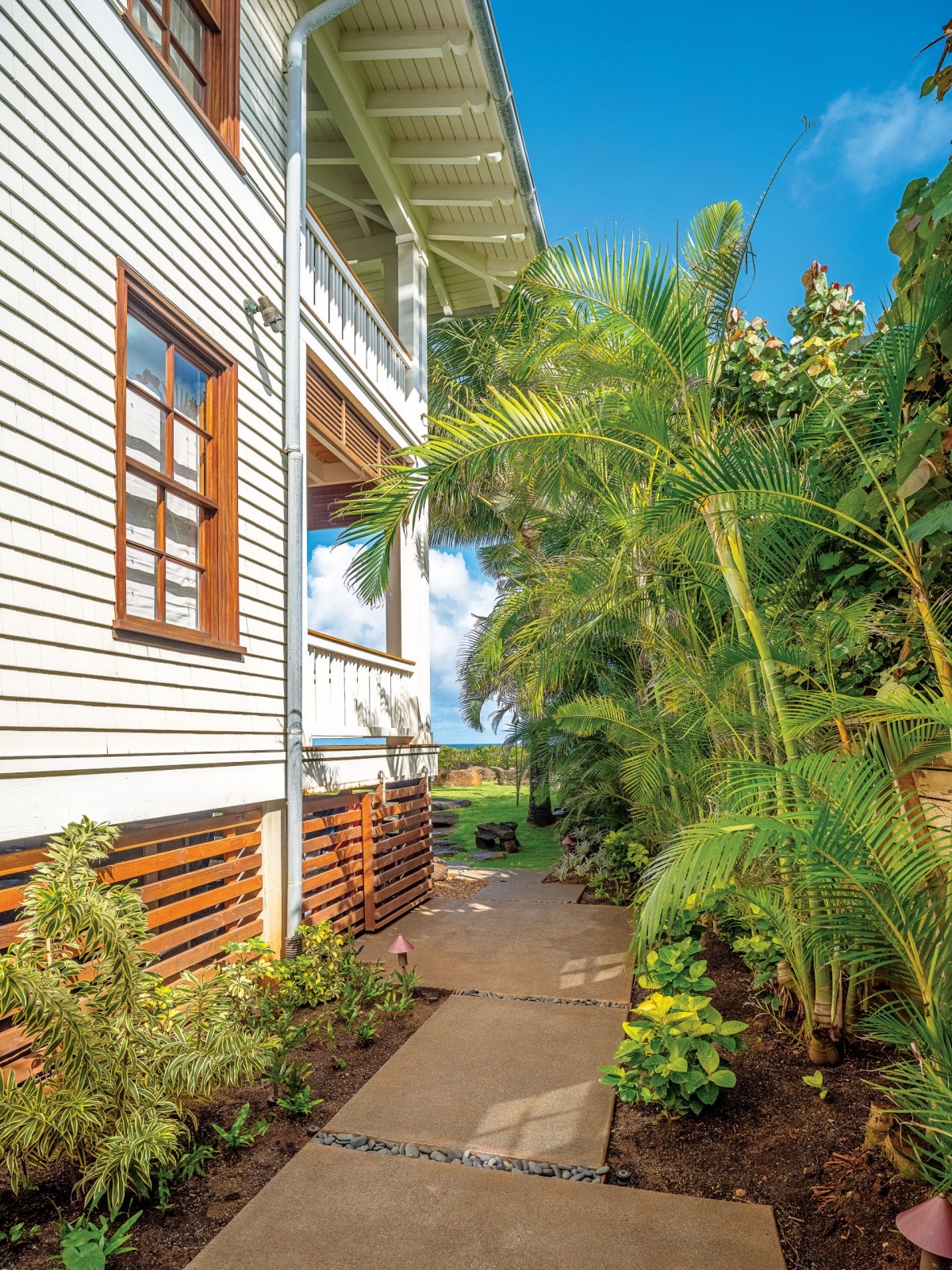 On either side of the house, low-maintenance plants that can handle the coastal climate hug the perimeter, including tall areca palm trees for added privacy.

To remedy this, Steve Dewald of Steve’s Gardening Service was tasked with bringing the landscape design by Steve Mechler to life — allowing the family to fully enjoy their outdoor spaces.

“It was just loose river-rock pebbles,” shares Dewald of what the space was like. “It was like walking on marbles. It was dangerous and slippery.” 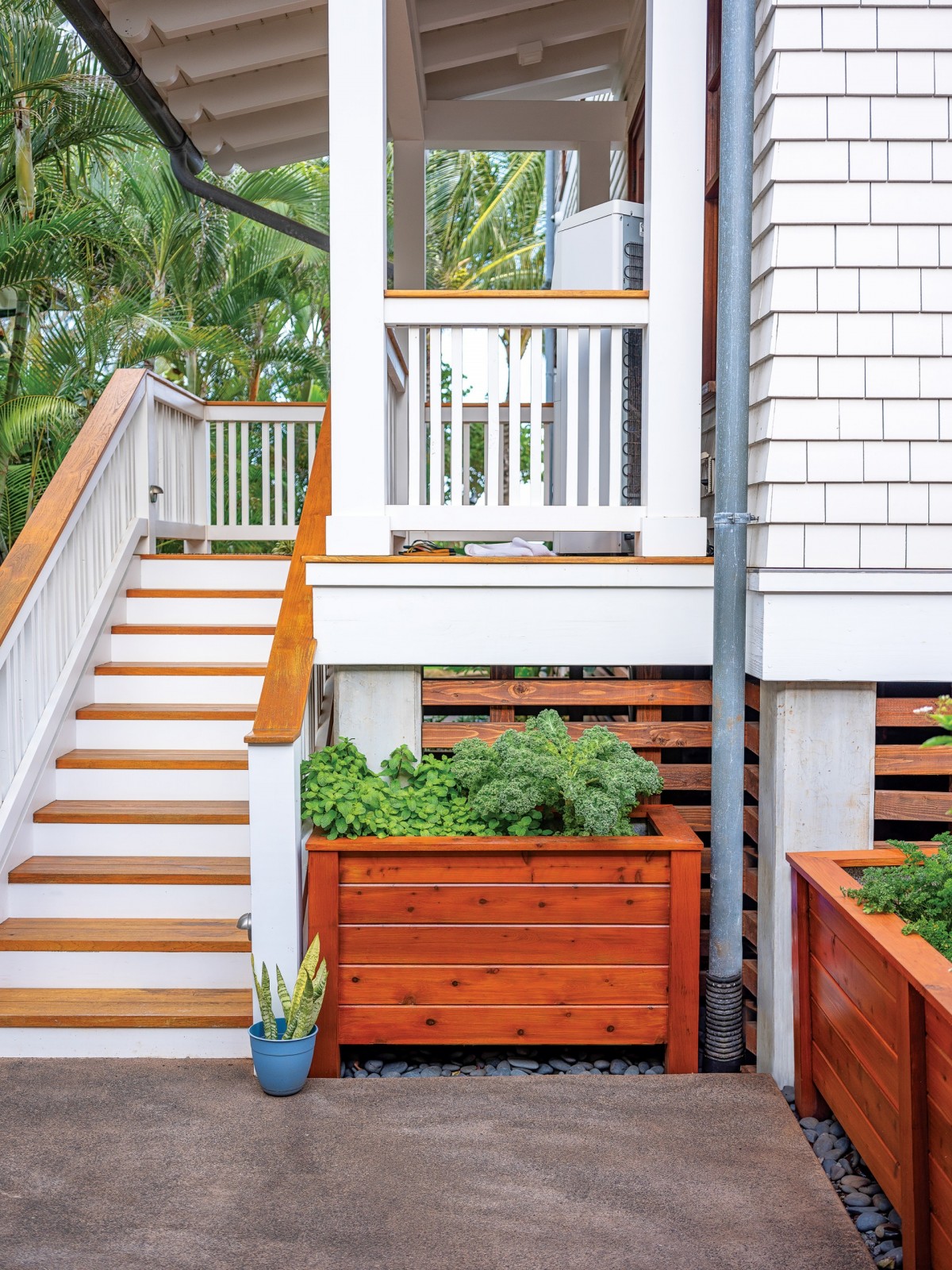 Right outside the kitchen are cedar planter boxes with fresh herbs and lettuce that the homeowners planted.

It’s Saturday morning, and it’s early. Really early. Earlier than I’m ever awake on a weekend, and, judging by the stillness of the Wahiawa streets, earlier than most anyone else, too. Except, that is, for a line of determined sweet-tooths already forming at Uber Factory, a barely-there nook tucked into a wee side alley off Kamehameha Highway. The bakery is home of the iconic Uber tarts, tantalizing, photogenic little desserts made from ube, an Asian yam known for its brilliant shade of violet and often used in Filipino cuisine. I take my place in the rapidly growing queue—we’re 10th in line and the joint hasn’t even opened yet—behind folks stocking up on tarts for first birthday parties, interisland trips and weekend adventures. Alert and ready, chef Andy Dalan and his Uber Factory teammate wear matching purple T-shirts, while filling boxes and boxes of tarts, doling out preordered packages and garnishing cheesecake squares for their horde of customers.

“Today’s our busiest day,” explains Dalan, a modest man with an easygoing demeanor who was raised eating ube. The craze leaves him unfazed. Sometimes, he says, “the line will wrap around the building.” He’s spent the past three days baking tarts and treats in anticipation of the weekend rush, when customers are willing to make the trip out to Wahiawa for their fix, and tonight he’ll make even more. It appears the demand is almost insatiable. The alley the bakery is on is more of a hallway for cars than an actual thoroughfare. The last time I was here, in fact, despite having grown up just a few miles down the road, I got completely, hopelessly lost—and I’m not the only one. There’s no sign near the street touting the distinctly neon purple branding, nor any indication on the sidewalk that creamy, social-media-igniting treats lie a few yards within. But Dalan’s downright addictive masterpieces have a tendency to hook you (he makes a whopping 10,000 tarts each week!). The eye-popping purple shade of his signature ube offering made them instant Instagram darlings, and his knack for snap-worthy garnishes—informed by a fine dining and pastry background—further endeared Uber Factory to the internet generation. And the taste? Luscious, creamy, chilly little things, with a custardy texture that holds each molded shape of your spoon or teeth, with all their imperfections; what puddings dream of being when they grow up. It’s all housed in a sturdy foundation of shortbread crust that doesn’t flake or crumble, but gives and gives and gives until it snaps. Today, Dalan’s also offering a White Koi iteration of the tart, with layers of white chocolate and passion fruit—and they’re already flying out of the shop by the dozens. Behind the back counter, Dalan’s patiently topping the second daily special, an ube cheesecake square: first, with three dollops of ube whipped cream, then a delicately balanced orchid-purple candy smear, and finally, a sprinkle of butter toffee chunks and chopped macadamia nuts. The result is a vibrant, edible masterpiece. The original ube tart, the one that started it all, was created on a whim, says Dalan, back when he was executive chef at Waimea Valley’s restaurant. He’d just gotten off his shift, was heading to a party in Waikiki, and had to pull together dessert on the fly. Using the this and thats he had at hand, “I just whipped something up and added whatever,” he says dismissively. “Okinawan sweet potato; I had some custard. But I didn’t taste it yet, not until I got to the dinner. I normally don’t eat my own stuff.” When he did, even he had to admit: It was good. Everyone at the party agreed. It wasn’t long before the coconut wireless was making the whimsical dessert a sensation, and the demand was too much for Dalan to handle alongside his day job. When a baker friend’s teeny retail location opened up, he jumped at it, quit his chef gig and committed himself to Uber Factory full time. Since then, he’s snagged a few retailers, and creates new flavors constantly while exploring other potential Uber Factory projects in his modest Wahiawa kitchen. (Insider scoop: Be on the lookout for an ice cream sandwich.) It’s the perfect under-the-radar location for him, someone less interested in garnering as much fuss as possible, and more interested in doing what he loves, at a pace he can handle—no matter how big the Uber Factory empire has the potential to be. “This is an old-school town,” he says. “We’re happy over here. Even when we first started, the first year, everyone was telling us, ‘Expand, expand.’ That’s not the reason I opened this business. It’d be the same thing as going back to my executive chef job. I could, but I said no. This,” he says, standing in his chipper purple kitchen, “is what I wanted to do.” It’s definitely a reprieve from the freneticism of Honolulu, where neighboring bakeries and cafés seem to compete with each other for likes, shares and sales. Things have changed in the past couple of decades for small, central Wahiawa, and it has undergone little transformations as a result, mostly in the form of trendy new shops and restaurants—much like Uber Factory itself. The spirit of a road less traveled and a story perhaps a bit more authentic (say, of a passionate, talented baker just trying to practice his craft in relative peace), however, remains. In some ways, this town serves as an unlikely sanctuary for inspired makers looking for a chance to exhale. And in the case of Uber Factory, in particular, it’s worth waking up for. Uber Factory Open Saturday and Sunday from 8 a.m. to 2 p.m., and Wednesday and Thursday from 9 a.m. to 5 p.m., 71 S. Kamehameha Hwy., Wahiawa, Oahu, facebook.com/uberfactory.

At the front of the home, concrete was put in to create a courtyard, which the homeowners had decided on to make it easier for the kids and to cut down on maintenance. Drainage for the home included drain chains — as part of the original house design — and Dewald and his team installed a new drainage system with multiple flow wells that allow water to percolate back into the ground.

5 Spaces That’ll Inspire You to Get Outside