For the first time in 30 years, three of the Big Island’s rarest endangered forest birds have been detected at lower elevations of the Hakalau Forest National Wildlife Refuge. The findings are spurring hope among scientists for recovery efforts.

The rediscovery of the birds at lower elevations along volcanic summits occurred during a joint U.S. Fish and Wildlife Service and U.S. Geological Survey project on the potential impact of climate change on avian disease.

All three species — Hawaii Creeper, Hawaii Akepa and Aiapolaau — are believed to be highly susceptible to mosquito-transmitted diseases. Consequently, their dwelling areas — once concentrated in lower elevations — have been pushed to the cooler, higher elevations. According to a joint news release issued this week by the federal agencies, “these new observations significantly extend the current known range of these species at the refuge.” 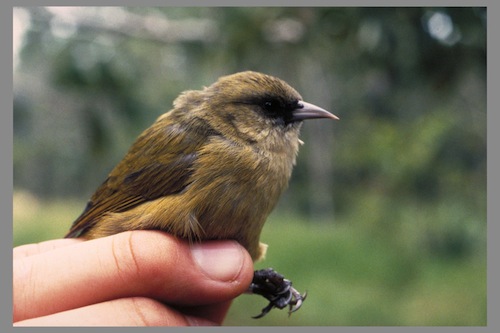 McNutt added, “The observation of three endangered species possibly expanding their range in a wildlife refuge gives us hope that with some care, the road to extinction need not be a one-way street.”

Scientists from the USGS Pacific Island Ecosystems Research Center and the USFWS Hakalau Forest National Wildlife Refuge heard the songs of the Hawaii Creeper (Oreomystis mana) and Hawaii Akepa (Loxops coccineus) at an elevation of 4200 feet near Awehi Stream, within one mile of where they were last observed by biologists during the 1977 Hawaii Forest Bird Survey. In addition, they were particularly encouraged by “visual and aural detections” of at least one endangered Aiapolaau (Hemignathus munroi). at 4200 feet, which is 1000 feet lower in elevation from previous sightings in the 1970s. 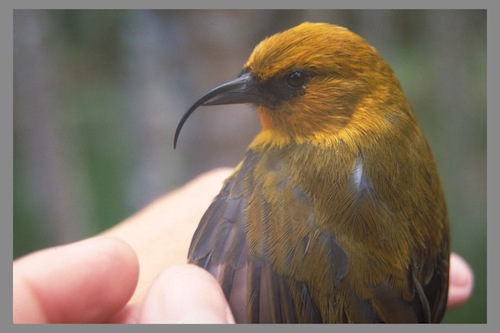 Surveys of forest habitats on the Big Island in the late 1970s and early ‘80s indicated that the best remaining habitats and largest native bird populations were in the high-elevation rainforests on the eastern slopes of Mauna Kea. This led to the establishment of Hakalau Forest National Wildlife Refuge in 1985, which aims to protect and manage endangered forest birds and their habitats. It’s the only national wildlife refuge dedicated to conservation and restoration of Hawaiian forest birds.
The Hakalau Forest refuge is one of few places on the Big Island where populations of native forest birds are increasing or at least stable. Scientists maintain that ongoing studies at the refuge may shed some additional light on whether the trio of endangered forest birds are holding their own or recovering at lower elevations.

For more information about recovery efforts for the rare birds, click here.