In the aftermath of last week’s collapse of Puu Oo crater floor in Kilauea volcano’s east rift zone, pahoehoe (smooth-flowing) lava is continuing to pour from vents at the crater site.

Scientists at the Big Island’s Hawaiian Volcanoes Observatory have released a video from an aerial overflight, on Mon., Aug. 8, above the lower west flank of Puu Oo. The video includes footage of several vents topped by spatter cones feeding narrow, fast-moving flows that funnel into a broad area of ponded lava. (Check out video at the bottom of the page.)

One of the more vigorous vents (pictured, above) is topped by a 20-foot spatter cone. “The flow from this vent cascades down several steps, joining the flow from two other nearby vents, before flowing under a small bridge and into the broad area of ponded lava to the west, “according to an observatory report.

The view inside the Pu Oo crater is hidden by a thick fume, but thermal camera images depict a “very tiny flow” of lava on the crater floor, according to an observatory report.

On Wed., Aug. 3,  shortly after the domed floor of Puu Oo crater collapsed, lava burst from the west flank of the Puu Oo cone, flooding downslope areas and forming a branched flow.

As scientists tracked the refilling, they noted the development of the perched lava lake, which has resembled an above-ground swimming pool. In early June, the lake’s levee climbed to a height of about 33 feet above the crater floor. At that time, the floor was about 170 feet below the crater rim. Subsequent lava lake overflows pushed the full crater floor closer to the rim 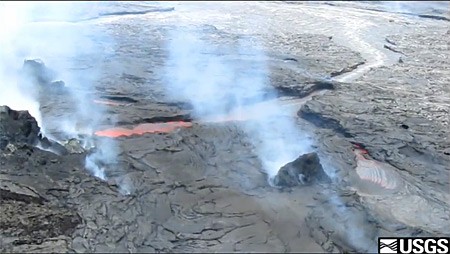