Kilauea volcano fanatics will want to check out the video below geologists at the Hawaiian Volcano Observatory recently posted of the familiar Halemaumau crater steam plume.

The time-lapse video, shot over a six-minute period on August 20, shows what happens when the normally white plume—mostly made up of steam and colorless sulfur-dioxide gas—suddenly mixes with ash, turning it a dark grey-brown.

Geologists believe a rockslide within the vent—triggered by a simultaneous earthquake five miles from the summit—was reason for this color and composition change. Also notice the burst in the plume’s volume and intensity as soon as the color change occurs.

Ash events like this one are fairly common at the Halemaumau vent. The plume typically returns to its usual white hue within hours.

Click anywhere on the frame below to see the video. Click here to check out all of HawaiiMagazine.com’s posts on Kilauea activity in 2008. 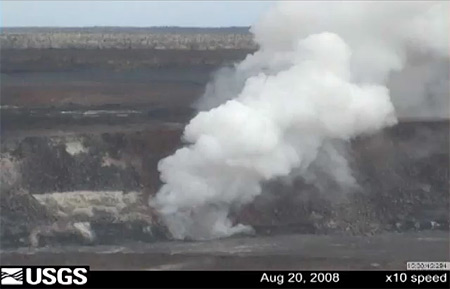