Hawaii’s Kilauea volcano hasn’t been making the kind of worldwide headlines it did in the spring and summer of 2008— when underground lava and ocean water regularly met with explosive force on the Puna coastline, and high sulfur dioxide levels forced the closure of Hawaii Volcanoes National Park twice in one month.

But that doesn’t mean the still very active Big Island of Hawaii volcano hasn’t been up to anything worth noting.

Though less reported on—likely for being somewhat less than explosive—activity at Kilauea summit’s Halemaumau crater vent continues. The steam and ash plume rising from the vent since March 2008, though less consistently voluminous, still emanates from an expanding crack in the crater floor. And the evening glow made by lava deep within the vent— though significantly less luminous after a July wall collapse—has sporadically returned, too.

On the Puna coastline, molten lava continues to create new land as it enters the ocean—with less explosive drama—through an underground delta of tubes.

Perhaps intent on proving that even a somewhat cooled down Kilauea is still, well, pretty cool, geologists at summit Hawaii Volcano Observatory have recently taken to sharing more video of the day-to-day goings on at the volcano—photographed with heavily-reinforced United States Geological Survey field cameras like the one in the photo above.

On this and the next few pages, you’ll find five of our favorite recent videos from the HVO crew (just click on the frames, to view the videos): 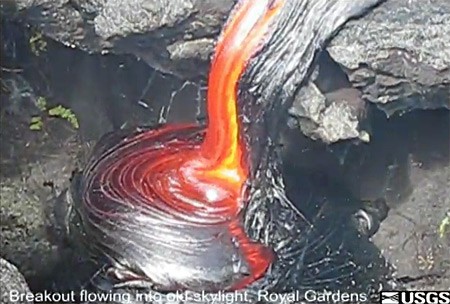 A finger of pahoehoe (smooth) lava flows into an old skylight at the top of the Royal Gardens subdivision. The subdivision overlooking the Puna coastline is now almost completely inundated by a quarter-century of  lava flows from Kilauea volcano’s Puu Oo vent. (Click on frame above to view the video.) 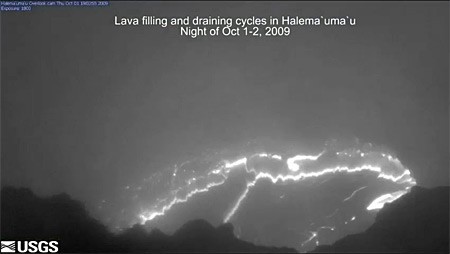 A low-light camera on the Halemaumau overlook rim captures an overnight session of lava draining and filling the vent’s cavity. Each cycle of draining and filling takes about two hours. The film’s 26 seconds comprise an entire evening at the vent. (Click on frame above to view the video.) 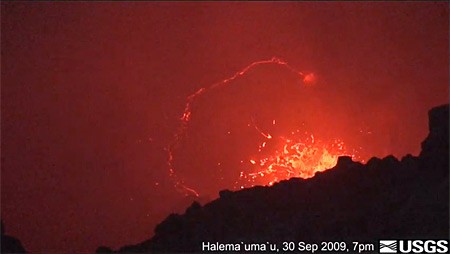 Two separate rockfalls crash into a lava pond in the Halemaumau vent cavity, briefly interrupting its incandescence. Rockfalls in the vent are common, resulting from the  collapse of the vent’s unstable walls. (Click on frame above to view the video.) 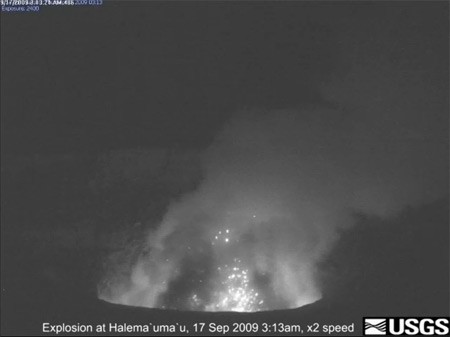 This early morning explosion in the Halemaumau vent cavity ejected hot particles about a hundred yards above the rim of the vent onto the crater floor, and even onto the Halema`uma`u Overlook. The video—shown at double speed—was shot from the Hawaii Volcano Observatory’s observation tower, on the Kilauea caldera rim. Halemaumau crater is located within the caldera. (Click on frame above to view the video.) 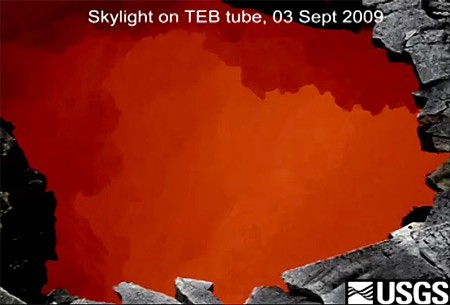 A skylight hole in older surface lava shows a fast-moving underground lava flow on its way to the Puna coastline. The lava stream is about two yards below the skylight. (Click on frame above to view the video.)