Lava is continuing to flow from a fissure on the upper southeast flank of Puu Oo crater — within Kilauea volcano’s east rift zone — but the pace has slowed since last week’s outbreak eruption.

All erupted lava is contained within Hawaii Volcanoes National Park or adjacent state land managed by the Department of Land and Natural Resources. It advanced about 2.3 miles before stopping short of the mostly abandoned Royal Gardens subdivision.

Last week, scientists had warned that if the eastern flows persisted, they could pose a hazard to the subdivision. During 1983 — the year Kilauea began erupting — lava flow destroyed houses and other buildings in Royal Gardens, which was then a largely undeveloped 1,800-acre community.

Puu Oo’s latest outbreak began on Tues., Sept. 20 with an overflow on the west flank of the cone crater. That flow stalled by the next morning as the southeast outbreak eruption got under way (pictured, below). A lava falls that formed near the Puu Oo’s eastern base during the outbreak (pictured, above) had a cascading drop of about 20 feet. (Check out the observatory’s three videos — at the bottom of this page — tracking the path of the outbreak lava.) 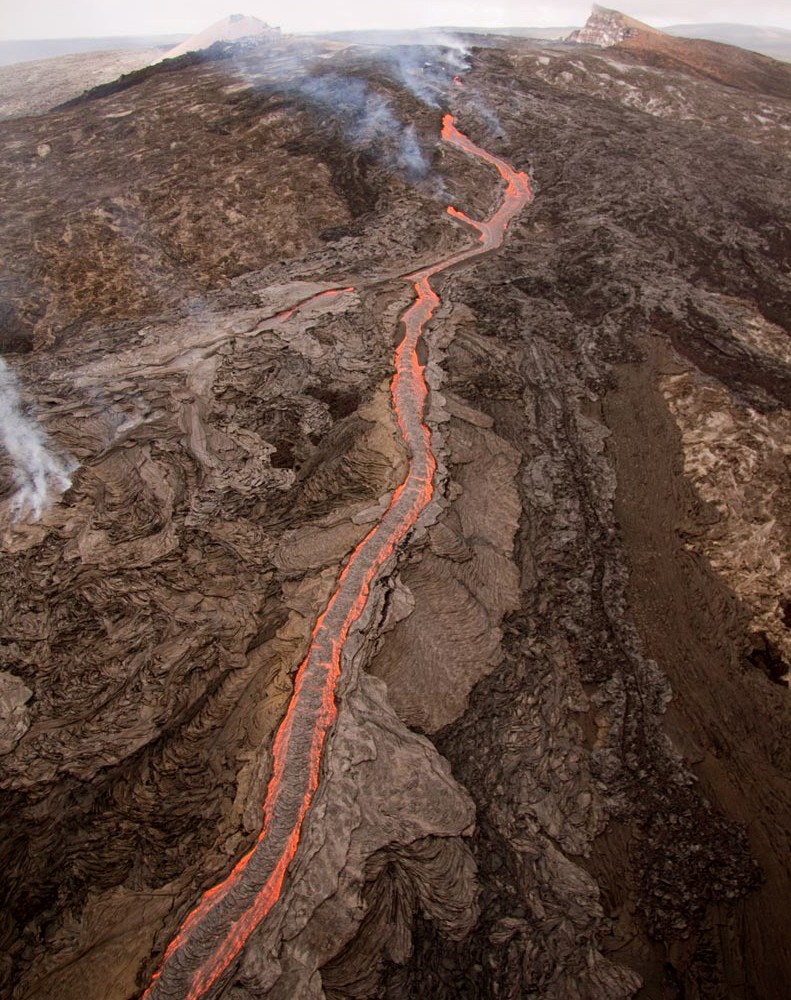 Earlier this year, lava drained from Puu Oo when the crater’s floor deflated and collapsed during the March 5 Kamoamoa fissure eruption. On March 26, shortly after the eruption paused, lava abruptly returned to the crater’s floor. The floor collapsed again on Aug. 3 — dropping about 245 feet below its east rim. On Aug. 21, lava started pouring into the crater again. It has since filled and overflowed, according to observatory reports.

VIDEO 1: Fast-moving upper section of the lava stream on the eastern flank of Puu Oo. The video pans to the left to show the smaller lava stream eruption from the lower (eastern) end of the fissure. (Click on frame below to watch.) 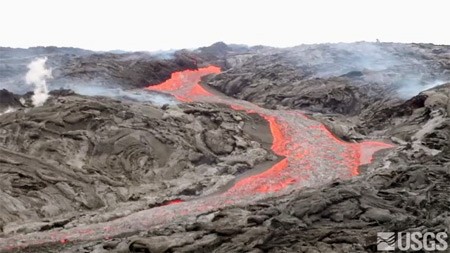 VIDEO 2: Main lava stream on the lower east flank. This stream carries most of the lava—the rest splits off to the south (to the left) and flows behind the mounds at upper left. Video 1 shows the section of the stream visible at upper right. The stream featured in this video is about 13 feet wide and 7 feet deep, and is moving at speed of about 10 feet per second. (Click on frame below to watch.) 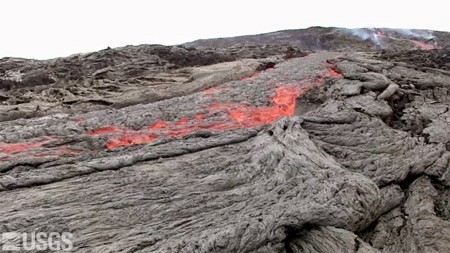 VIDEO 3: Lava cascading to a height of about 20 feet near eastern base of Puu Oo. This is the same lava stream shown in both previous videos. The lava stream continues on several hundred yards before transitioning into a stony pahoehoe (smooth-flowing lava) and stalling. (Click on frame below to watch.) 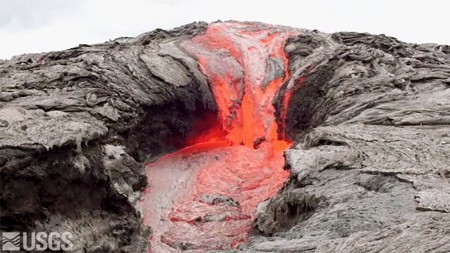