Meghan Miner,
Yesterday, several dozen birds flew across the Kauai Channel before they hatched. Forty-three moli (Laysan albatross) eggs made the trip from Kauai to Oahu, packed in soft layers and tucked inside heated “coolers,” aboard a regularly scheduled Navy plane.

The relocated albatross are part of a new joint effort between the U.S. Navy, the U.S. Fish and Wildlife Service (USFWS) and Pacific Rim Conservation to establish a brand new colony of the bird at the James Campbell Wildlife Refuge on Oahu’s North Shore. The refuge has everything that albatross need to thrive, but no current nesting populations.

For several years, the Navy has been moving moli eggs from the area around an active runway at Kauai’s Pacific Missile Range Facility (PMRF) to other locations on the island, in an attempt to disband a colony at the base. During breeding season, adult nesting Laysan albatross regularly circle nests with their more than six-foot wingspans, proving navigational hazards for aircraft leaving the base. Removing eggs from nests there creates a disincentive for the adult birds to return.

Previously, the Navy relocated the base’s eggs by placing them under unsuspecting foster parents that were incubating unviable eggs in colonies on Kauai’s northern coast. This year, however, Kauai’s moli seemed to produce fewer unviable eggs, and so only eight eggs could be placed with foster parents.

A surplus of viable eggs from PMRF—coupled with encouragement and financial assistance from several non-profits—motivated the Navy to join forces with new partners to undertake this cooperative experiment. 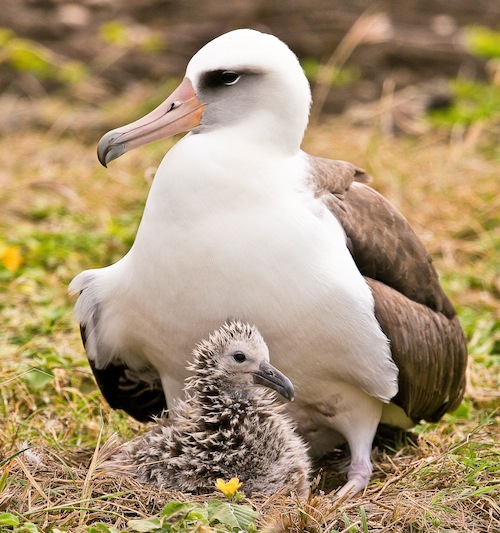 Jared Underwood, of the Hawaiian and Pacific Islands National Wildlife Refuge Complex, will help to oversee monitoring of the birds in their new home at the James Campbell National Wildlife Refuge. He explained to HAWAII Magazine, “We’ve reached some perceived limits of locations to relocate them on Kauai, so this was an opportunity to expand their range.”

Now safely within their new home, the eggs will incubate for up to a month and a half before they hatch. And, for the next three to five months, workers will have their hands full, tending to the chicks and feeding them crushed squid, fish and vitamins through tiny feeding tubes out on the refuge.

Underwood says they have also been planning for the fledglings’ arrival out on the refuge grounds by erecting fences as a preemptive measure of predator control. It’s all an attempt to make a comfortable environment there, because, ironically, the same behavior researchers are trying to discourage at PMRF, they hope to encourage in the baby birds at the James Campbell National Wildlife Refuge.

“We hope they will come back in 3-5 years when they’re ready to nest,” says Underwood. “They call it nest site fidelity… Once they establish a nesting territory they’ll come back within that same area, sometimes within 10-20 feet of their old nest site.”

There are two other Laysan albatross colonies already on Oahu, but Underwood and his colleagues see the new colony on the North Shore as an important conservation opportunity.  “It comes back to this concept of you don’t want to put all of your eggs in one basket.”

While the Laysan albatross currently number in the millions, more than 90 percent of them nest in the low-lying Northwestern Hawaiian Islands. “If sea level rise or changes in weather patterns affect these places,” says Underwood, “we could find that those colonies are no longer viable.”

Moli are among the smallest of the albatross family, a group known for its incredible wingspan. And, they live a long time. At 63 years old, one female Laysan albatross named Wisdom, is the oldest known wild bird in the Northern Hemisphere.

While the James Campbell National Wildlife Refuge is closed to the public, moli can be viewed at other locations on Oahu, such as Kaena Point Natural Area Reserve.