You don’t want to miss this hard-to-find chip factory in Hanepēpē.

“If you drive too fast, you’ll miss it.”

That was the sage, if succinct, advice I received from a friend several years ago when I mentioned I was headed to the small farming town of Hanapepe on Kauai’s south shore. She was describing a worn-down, faded green cottage on the biggest bend of the town’s main drag, Hanapepe Road. A place that, should I be fortunate enough to find it, sold the freshest—and, there are many that argue, best—taro and sweet potato chips in the state.

Ever since my first taste of Taro Ko Farm chips—thinner than mass-produced varieties, wonderfully crisp, with a toothsome garlic salt kick—I’ve been a believer. They’re that good.

It really is easy to miss Taro Ko’s, uh, factory. The sign outside the two-room, former plantation-laborer home bears a barely readable address. A shelf on the building’s far end is stocked with bananas, squash and papaya sold on the honor system. The smallish door into the shop is closed tight when chips sell out. But, if it’s open, the person you’ll likely find there will be Dale Nagamine, Taro Ko’s 60-year-old owner and sole employee.

Standing at a 30-inch wok filled with thin-sliced taro, potato or sweet potato gliding buoyantly on bubbling soybean oil, Nagamine probably won’t turn from his work to acknowledge you, or stop working to sell you a bag of chips. They are, after all, usually stacked in cardboard boxes just inside the entrance on a small table. You know, within sight and all.

Thankfully, however, Stanley Sakoda will take your money AND exchange pleasantries. Sakoda is Nagamine’s childhood friend and greeter of Taro Ko customers, who hangs out at the factory every day, all the time.

“You a Seahawks fan?” Sakoda inquires of a hulking blond man sporting a logo T-shirt for Seattle’s hometown NFL team who walks in looking for taro chips.

“That would be right,” the man replies, smiling and eyeing the San Francisco 49ers hat perched on Sakoda’s head. “I take it you’re not.”

The two start talking football and playoffs. Before long, the man, who only days before sampled his first Taro Ko chip, leaves with three bags.
Nagamine says more customers have found their way to the factory in recent years, largely thanks to the Web and word of mouth. He has also been approached about wholesaling his increasingly popular chips but has turned down all comers, happy with the amount he currently produces and wanting no more. And, secretly, he likes that Taro Ko is so hard to find.

“Good,” he says, stirring slices of sweet potato in the hot oil with an old bamboo-handled strainer, not looking away from the wok. “No need work so hard.” 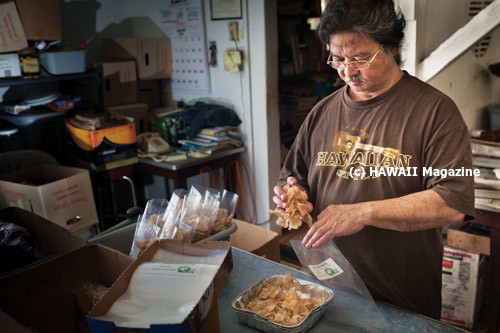 Nagamine’s parents, Shoichi and Shizuko, started the business in 1985, after retiring as taro farmers. The couple had at first fried chips made of lehua kalo (a Hawaii native taro used to make red poi) on the side for friends and family, never imagining that people would want to buy them. The Nagamines named the company after the road alongside which their 10-acre lehua kalo farm in Hanapepe Valley was located.

Dale Nagamine took over the business full-time when his mother passed away six years ago, quitting his day job as a taro farmer to churn out chips instead. He still grows all of Taro Ko’s kalo—bun-long, a Chinese taro variety, is best for chips—on a smaller, 6-acre farm in Hanapepe. In the factory, he sometimes works seven days a week, eight hours a day peeling, slicing, frying, baking, seasoning and packing chips.
“I just make a little every day,” he says. “If no sell out, no need make more.”

The most popular chip Taro Ko makes, hands down, is taro, which sells for $5 a bag. Nagamine goes through about 120 pounds of taro a week, also frying up more than 60 pounds of Russet and sweet potato chips, which he added to his modest menu about three years ago. When ulu (breadfruit) is in season, from August to early January, he fries chips from it, too—their flavor like a butter-kissed potato chip.

There’s no high-tech machinery to make chips at Taro Ko. Nagamine simply employs a machine-grade Hobart slicer he purchased secondhand, a convection oven and a few large woks perched on gas burners. (He really only uses one of the latter, though.) The process he follows to make his light, crisp chips, however, is more tedious than I expect.

He begins by slicing and soaking the taro chips in water, before frying them for a few minutes in soybean oil. After draining the chips, Nagamine bakes them for three to four hours in a convection oven in another room. It can take all day to make a full batch of chips.

“However they did it, that’s how I do it,” Nagamine says, of the chip-making process, perfected by his parents. 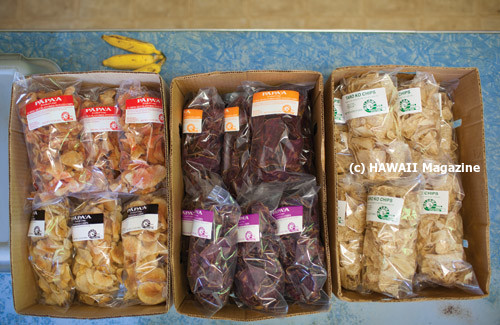 The ramshackle building Taro Ko occupies was for decades home to Hanapepe’s only saimin stand and remnants of its former life remain. Nagamine slices and fries his chips in the former restaurant’s kitchen. The saimin stand’s dining area, which still has its old menu board on the wall and wooden stools bolted to the floor, is now mostly stocked with plastic bags, labels and cases of Heineken. After hours, Nagamine and his friends gather here to watch football, drink beer and, sometimes, sing karaoke.

As for the future of Taro Ko and growing the business, Nagamine says he has no interest in advertising the chips or building a website. Don’t even ask him about social media. He will ship bags of chips just about anywhere in the world—as long as you pay for the postage. But that’s about it.

He likes Taro Ko small. He likes it manageable. He likes his life as is.

“I like to keep it simple,” he says, a shy smile escaping. “Don’t let the work run me.”

(This feature was originally published in the March/April 2014 issue of HAWAII Magazine.)