A lava flow from Kilauea volcano continued to advance toward residential areas in Hawaii Island’s Puna district this week, turning toward the town of Pahoa and the only access roads connecting it to the rest of the island.

The front of the slow-moving lava flow, which we reported last Friday was threatening the residential subdivision of Kaohe, this week bypassed neighborhood homes and began moving northeast towards neighboring Pahoa. On Mon., Sept. 17, the flow crossed the Wao Kele o Puna Forest Reserve boundary and into forested vacant lots within Kaohe. As of this morning, however, the 11.6-mile flow had entered open ground roughly three miles upslope from Pahoa. 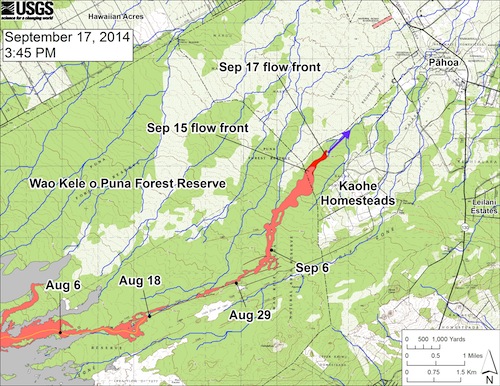 Map showing the flow as it has advanced from Aug. 6 to Sept. 17. The purple arrow indicates the expected onward flow direction. (Click to enlarge). Image: USGS/Hawaiian Volcano Observatory.

The USGS Hawaiian Volcano Observatory’s current projection anticipates the flow will cross two critical access routes within the next few weeks. Keeau-Pahoa Road (Pahoa Village Road), a small two-lane outlet running through Pahoa town, and the larger Highway 130 (Pahoa Bypass Road), are the only arteries connecting the small communities of Hawaii Island’s easternmost tip to the rest of the island. Both are threatened by the approaching flow.

As of this morning, the front of the flow was still 1.5 miles upslope from Apaa Road, a small back road connecting to Keeau-Pahoa Road. The latest Hawaiian Volcano Observatory estimates suggest the flow could cross Apaa Road within a week, and Keeau-Pahoa Road (Pahoa Village Road) in 11 days. 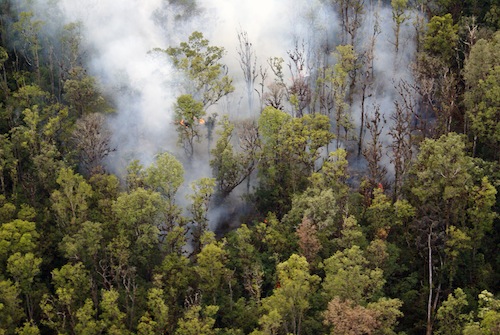 The leading front of the lava flow as it advanced through uninhabited forested area. Photo dated Wed., Sept. 17. (Click to enlarge.) Photo: USGS/Hawaiian Volcano Observatory.
Construction has begun on clearing alternate routes farther east of the flow aimed at connecting Pahoa and area communities to the rest of the island should the flow continue on its current projected path.
On Thursday morning, the Hawaiian Volcano Observatory (HVO) reported that the front edge of the lava had narrowed over the last several days. The speed of the flow has been fluctuating as the flow progresses. Between Sept. 15 and 17, the flow had picked up speed, advancing 960 feet per day compared to Sept. 12 to 15 rates of 705 feet per day. HVO reported this morning that in the last three days the flow’s advance had slowed again to 660 feet per day. 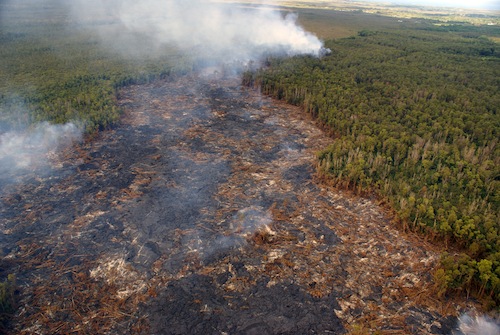 The destruction caused by the lava flow as it advanced through uninhabited forested area. Pahoa is in the upper right portion of the photograph. Photo dated Wed., Sept. 17. (Click to enlarge.) Photo: USGS/Hawaiian Volcano Observatory.

Situated 20-miles southeast of Hilo, Pahoa and Kaohe are part of Hawaii Island’s Puna district, which encompasses the island’s eastern-most tip. The current flow, which began on June 27, is part of a long-running eruption from the Puu Oo volcanic cone, on the eastern flank of Kilauea volcano. Eruptions in the area have been continuous since 1983. According to USGS statistics, lava from the three-decade plus eruption has already destroyed 189 structures and claimed eight miles of highway.

Hawaii County Civil Defense officials have yet to order evacuations of Pahoa or Kaohe. A Friday morning web update from the agency stated that the flow did not pose an immediate threat to the communities and that residents would be given adequate notice to safely evacuate should it become necessary.

HawaiiMagazine.com will continue to monitor news from Hawaiian Volcano Observatory on the lava flow. We will update this story as necessary.

You can also follow the USGS Hawaiian Volcano Observatory as they monitor the situation.