Last days to enter! Win an Oahu vacation for the 2015 Honolulu Festival from HAWAII Magazine.

The clock is ticking on your chance to win an airfare, hotel and ticket package for you and a friend to attend the 21st annual Honolulu Festival! The festival is one of the state’s longest-running and premier annual cultural celebrations showcasing talent from around the Pacific Rim.

HAWAII Magazine’s 2015 Honolulu Festival Oahu Flyaway includes a five-day/four-night stay at the Hawaii Prince Hotel Waikiki, flights from Hawaiian Airlines, and tickets to some of the Honolulu Festival’s most popular events—the Friendship Gala and Grand Parade. We’ll even throw in some spending money to use at the Ala Moana Center and a submarine ride with Atlantis Adventures so you can check out some underwater life before heading home.

But don’t delay! Entries will only be accepted until Fri., Jan. 23, 2015 at midnight, Hawaii Standard Time.

The three-day Honolulu Festival happens every March. This year’s 21st annual edition will run from March 6-8, 2015 with the theme “Creating Cultural Friendships with Aloha.” The festival again promises thousands of musicians, dancers and artists from around the Pacific: Japan, Australia, Tahiti, the Philippines, Taiwan, Korea, Alaska, as well as, of course, Hawaii.

The festival’s Grand Parade along Kalakaua Avenue in Waikiki, and a dazzling Nagaoka Fireworks Show over Oahu’s south shore beaches will again conclude the event.

…And you could be there as the winner of HAWAII Magazine’s 2015 Honolulu Festival Oahu Flyaway Contest! Just make sure you clear your calendars March 5-9, head on over to the contest entry page, and enter before Friday at midnight (Hawaii Time)! 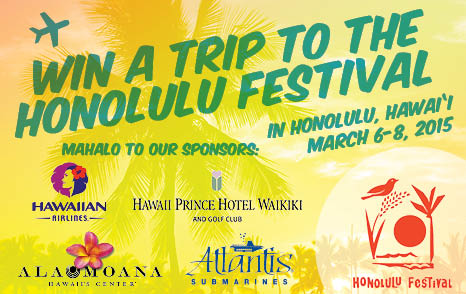 •    Two (2) complimentary tickets for Atlantis Premium Submarine Tour to enjoy during their stay in Oahu, provided by Atlantis Adventures.

Here’s how to enter:

We will select one winner at random and notify them via email on Tues., Jan. 27, 2015. The winner will be given 24 hours from the time the prize-winning notification is sent to reply back to us before the prize is forfeited and awarded to another winner.   For a complete list of contest rules, click here.

Mahalo for entering, and good luck!     For more information about the 2015 Honolulu Festival, click here. And a big mahalo to our friends at Hawaiian Airlines, Hawaii Prince Hotel Waikiki, Ala Moana Center, Atlantis Adventures and Honolulu Festival for partnering with us for the contest once again!